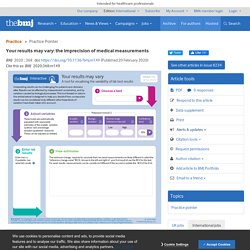 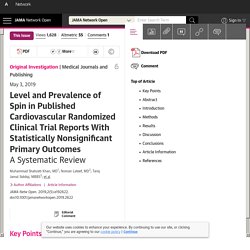 Why I don’t read medical literature. Medical evidence has a credibility problem that is rooted in the fundamental problems with statistics. 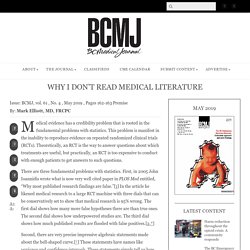 This problem is manifest in the inability to reproduce evidence on repeated randomized clinical trials (RCTs). Theoretically, an RCT is the way to answer questions about which treatments are useful, but practically, an RCT is too expensive to conduct with enough patients to get answers to such questions. There are three fundamental problems with statistics. First, in 2005 John Ioannidis wrote what is now very well cited paper in PLOS Med entitled, “Why most published research findings are false.”[1] In the article he likened medical research to a large RCT machine with three dials that can be conservatively set to show that medical research is 95% wrong. The first dial shows how many more false hypotheses there are than true ones. Third, probability theory was originally developed for nothing more than winning at games of chance. 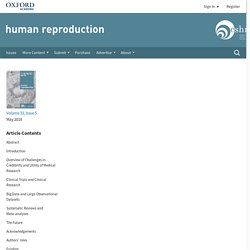 The scope and conventions of evidence‐based medicine need to be widened to deal with “too much medicine” - Llewelyn - 2018 - Journal of Evaluation in Clinical Practice. In order that evidence‐based medicine can prevent “too much medicine”, it has to provide evidence in support of “gold standard” findings for use as diagnostic criteria, on which the assessment of other diagnostic tests and the outcomes of randomized controlled trials depend. 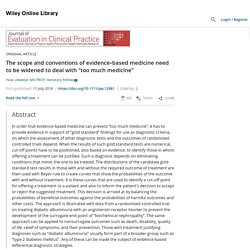 When the results of such gold standard tests are numerical, cut‐off points have to be positioned, also based on evidence, to identify those in whom offering a treatment can be justified. Such a diagnosis depends on eliminating conditions that mimic the one to be treated. Abandon Statistical Significance! That’s the title of a paper accepted for publication in The American Statistician. 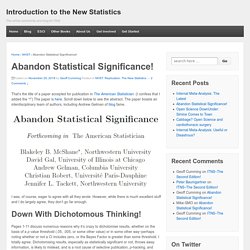 (I confess that I added the “!”) The paper is here. Scroll down below to see the abstract. The paper boasts an interdisciplinary team of authors, including Andrew Gelman of blog fame. Do clinicians want recommendations? A multicenter study comparing evidence summaries with and without GRADE recommendations. - PubMed - NCBI. Congratulations. Your Study Went Nowhere. The following originally appeared on The Upshot (copyright 2018, The New York Times Company). 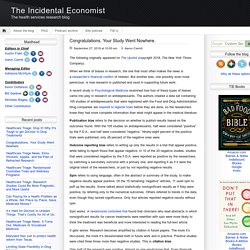 When we think of biases in research, the one that most often makes the news is a researcher’s financial conflict of interest. But another bias, one possibly even more pernicious, is how research is published and used in supporting future work. A recent study in Psychological Medicine examined how four of these types of biases came into play in research on antidepressants. The authors created a data set containing 105 studies of antidepressants that were registered with the Food and Drug Administration. Drug companies are required to register trials before they are done, so the researchers knew they had more complete information than what might appear in the medical literature. Publication bias refers to the decision on whether to publish results based on the outcomes found. Spin refers to using language, often in the abstract or summary of the study, to make negative results appear positive.

Workplace Wellness Programs Don't Work Well. Why Some Studies Show Otherwise. Misconceptions about Confidence Intervals - Statistics Solutions. During the course of conducting your analyses and writing up your results, your mentor, committee member, or other reviewer may suggest that you include confidence intervals in your report. 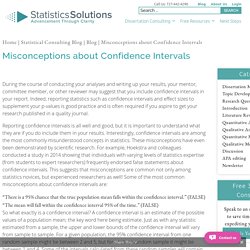 Indeed, reporting statistics such as confidence intervals and effect sizes to supplement your p-values is good practice and is often required if you aspire to get your research published in a quality journal. Reporting confidence intervals is all well and good, but it is important to understand what they are if you do include them in your results. Interestingly, confidence intervals are among the most commonly misunderstood concepts in statistics. These misconceptions have even been demonstrated by scientific research. Are systematic reviews and meta-analyses still useful research? We are not sure. Major challenges and threats to the validity and interpretation of systematic reviews and meta-analyses include lack of systematic and transparent conduct and reporting, poor methodological quality of the included studies, risk of random errors, unrecognized and unaccounted statistical and clinical heterogeneity, data dredging in non-predefined statistical analyses, and lack of assessment of the overall quality of evidence. 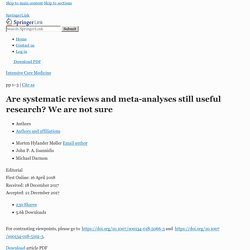 Lack of systematic and transparent conduct and reporting of systematic reviews is still common, despite efforts at prompting registration and careful reporting. Many systematic reviews are often flawed, redundant and/or misleading [3]. Effects of the Informed Health Choices podcast on the ability of parents of primary school children in Uganda to assess claims about treatment effects: a randomised controlled trial - The Lancet.

Key Concepts 2017 edition. Selective Publication of Antidepressant Trials and Its Influence on Apparent Efficacy. Why all randomised controlled trials produce biased results: Annals of Medicine: Vol 0, No 0. For the obedience of fools and the guidance of wise men? - PubMed - NCBI. Medical Overtreatment: Friend or Foe? - FullText - Gerontology 2018, Vol. 64, No. 3. Why clinical trial outcomes fail to translate into benefits for patients. Badly chosen outcomes Surrogate outcomes Surrogate markers are often used to infer or predict a more direct patient-oriented outcome, such as death or functional capacity. 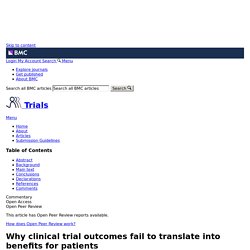 Such outcomes are popular because they are often cheaper to measure and because changes may emerge faster than the real clinical outcome of interest. This can be a valid approach when the surrogate marker has a strong association with the real outcome of interest. Treatment Effect in Earlier Trials of Patients With Chronic Medical Conditions: A Meta-Epidemiologic Study - Mayo Clinic Proceedings. Healthcare Triage: The Ups and Downs of Evidence-Based Medicine. This week on HCT, we’re talking about evidence-based medicine.

We talk about it a lot here on the show, but what exactly does the term mean? Less research is needed - Speaking of Medicine. Guest blogger Trish Greenhalgh suggests its time for less research and more thinking. The most over-used and under-analyzed statement in the academic vocabulary is surely “more research is needed”. These four words, occasionally justified when they appear as the last sentence in a Masters dissertation, are as often to be found as the coda for a mega-trial that consumed the lion’s share of a national research budget, or that of a Cochrane review which began with dozens or even hundreds of primary studies and progressively excluded most of them on the grounds that they were “methodologically flawed”. Yet however large the trial or however comprehensive the review, the answer always seems to lie just around the next empirical corner.

What We Mean When We Say Evidence-Based Medicine. The following originally appeared on The Upshot (copyright 2017, The New York Times Company). In medicine, the term “evidence-based” causes more arguments than you might expect. And that’s quite apart from the recent political controversy over why certain words were avoided in Centers for Disease Control and Prevention budget documents. The arguments don’t divide along predictable partisan lines, either. Five ways to fix statistics. JEFF LEEK: Adjust for human cognition To use statistics well, researchers must study how scientists analyse and interpret data and then apply that information to prevent cognitive mistakes.

In the past couple of decades, many fields have shifted from data sets with a dozen measurements to data sets with millions. Methods that were developed for a world with sparse and hard-to-collect information have been jury-rigged to handle bigger, more-diverse and more-complex data sets. No wonder the literature is now full of papers that use outdated statistics, misapply statistical tests and misinterpret results. Ebm.bmj. Eci. Narrative-Based Medicine: Potential, Pitfalls, and Practice.

Adverse anecdote and clinical practice. Seeking collateral information when clinical practice guidelines deliver strong recommendations for drug therapies on the basis of a single clinical trial. Cait SE O’Sullivan, PharmD (biography, no disclosures) What I did before I used to be too easily persuaded about the benefits and harms of a drug therapy on the basis of single randomized controlled trial. What changed my practice A 2014 analysis tested the durability of strong recommendations across American College of Cardiology/American Heart Association (ACC/AHA) clinical practice guidelines [1].

Across 11 ACC/AHA guidelines, researchers identified 619 strong recommendations which according to the ACC/AHA indicates that a “procedure/treatment should be performed/administered”. During a 2016 U.S. What I do now As supportive evidence, the CCS guideline references a randomized controlled trial: “Ezetimibe added to statin therapy after acute coronary syndromes” (IMPROVE-IT trial) [7]. SHS EBM Toolkit hyperlinked. We can teach children to smell bullshit. How much are readers misled by headlines that imply correlational findings are causal? – Research Digest.

By Alex Fradera What do you take from this hypothetical headline: “Reading the Research Digest blog is associated with higher intelligence”? 152: A MEASURE FOR ESTIMATING THE MAGNITUDE OF UNNECESSARY OVERTREATMENT, OVER TESTING AND OVER PREVENTING. There is not any summary measure in EBM for showing the magnitude of unnecessary medical interventions including overtreatment, over testing and over preventing.

Glossary - CEBM. Ultimate Critical Thinking Cheat Sheet. Reassurance After Diagnostic Testing With a Low Pretest Probability of Serious DiseaseSystematic Review and Meta-analysis. The effectiveness of interventions to change six health behaviours: a review of reviews. We identified 103 systematic reviews evaluating interventions aimed at changing health behaviour in one or more of the six areas. Let's not confuse measurable with meaningful in primary care. Picture two relatively healthy female patients, both in their 50s. Neither “Mrs. Smith” nor “Mrs. Johnson” has a family history of breast cancer or any other significant risk factor for this disease. Each woman has been a patient at the same family practice and, over time, each has established a positive, trusting relationship with their doctor, whom we’ll call “Dr. Williams.” Heterogeneity of treatment effects: from “How to treat” to “Whom to treat” Medical Reversal: Why We Must Raise the Bar Before Adopting New Technologies.

Our world is awash in bullshit health claims. These scientists want to train kids to spot them. Over my years in health journalism, I’ve debunked many dubious claims. I’ve discussed how to cover quacks like Dr. Does quality improvement improve quality? Effectiveness and Implications of Alternative Placebo Treatments: A Systematic Review and Network Meta-Analysis of Osteoarthritis TrialsEffectiveness and Implications of Alternative Placebo Treatments.

Getting clearer on overdiagnosis - Rogers - 2016 - Journal of Evaluation in Clinical Practice. At What Time is a Reduction of Medical Under- or Overtreatment Sensible? Treatment of Acute Depression as an Example. A method for the detailed assessment of medical technologies - RAND. Five year survival rates can mislead. The Lake Wobegon Effect: Why Most Patients Are at Below-Average RiskThe Lake Wobegon Effect. How to prove that your therapy is effective, even when it is not: a guideline. Why Do We Give Medical Treatment That Increases Patients' Chances of Dying? Why reporting on health and science is a good way to lose friends and alienate people. EBM’s Six Dangerous Words. John Ioannidis has dedicated his life to quantifying how science is broken. Rethinking our Thinking about Diagnostic tests: There is nothing Positive or Negative about a Test result.

When Medicine Reverses Itself. How to Measure a Medical Treatment’s Potential for Harm. » Mind Your “p”s, RRs, and NNTs: On Good Statistics Behavior. Can This Treatment Help Me? There’s a Statistic for That. The one chart you need to understand any health study. Richard Smith: How to fill the void of evidence for everyday practice? NNT - Informacion farmacoterapeutica. Benchmarking Overuse of Medical Interventions for Bronchiolitis. Diagnoses, Predictive Values, and Whether You're Sick or Not: NPV and PPV. A critical interpretive synthesis of recommendations for De-intensification and de-IMPLEmentation from population Screening (DIMPLES).