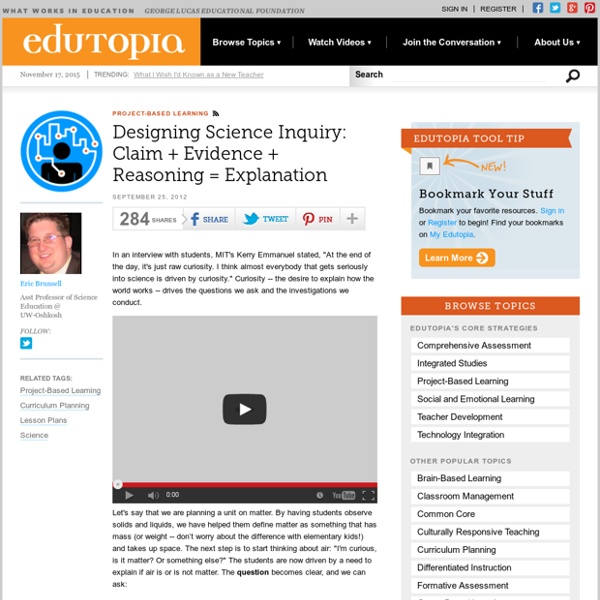 In an interview with students, MIT's Kerry Emmanuel stated, "At the end of the day, it's just raw curiosity. I think almost everybody that gets seriously into science is driven by curiosity." Curiosity -- the desire to explain how the world works -- drives the questions we ask and the investigations we conduct. Let's say that we are planning a unit on matter. By having students observe solids and liquids, we have helped them define matter as something that has mass (or weight -- don’t worry about the difference with elementary kids!) and takes up space. Is air matter? Next, we can ask our students what data they need to answer the question, and how they can collect that data -- how they can investigate. According to the CER model, an explanation consists of: A claim that answers the question Evidence from students' data Reasoning that involves a "rule" or scientific principle that describes why the evidence supports the claim Your students might suggest the following explanation:

Scientific Writing Scaffolds As a department we've been working on different writing scaffolds. We use Constructing Meaning as a school which I think is mostly good. We've tried all kinds of different writing frames with varying degrees of success. Most of these come from Constructing Meaning. Does Knuckle Cracking Lead to Arthritis? 3 CER Examples based on FUN Science! CER is an awesome format to teach science students, but CER examples are lacking. CER stands for Claim, Evidence, and Reasoning. It is a great format for writing explanations is it serves to tie together findings, data, and scientific principles. Teaching Critical Thinking Teaching Critical Thinking Reasoning from Evidence to Claims In addition to evaluating the reliability of evidence, one must ask whether the movement from evidence to claims or sub-claims is warranted. Certain tests for reasoning are especially useful in particular fields (e.g., tests of statistical reasoning).