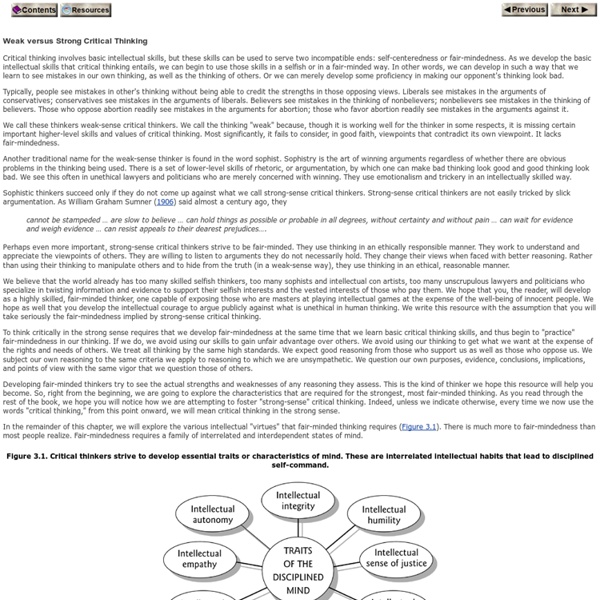 Weak versus Strong Critical Thinking Critical thinking involves basic intellectual skills, but these skills can be used to serve two incompatible ends: self-centeredness or fair-mindedness. As we develop the basic intellectual skills that critical thinking entails, we can begin to use those skills in a selfish or in a fair-minded way. In other words, we can develop in such a way that we learn to see mistakes in our own thinking, as well as the thinking of others. Typically, people see mistakes in other's thinking without being able to credit the strengths in those opposing views. We call these thinkers weak-sense critical thinkers. Another traditional name for the weak-sense thinker is found in the word sophist. Sophistic thinkers succeed only if they do not come up against what we call strong-sense critical thinkers. Perhaps even more important, strong-sense critical thinkers strive to be fair-minded. Figure 3.1. Figure 3.2. Related:  lebromeo • Critical Thinking

10 Team-Building Games That Promote Collaborative Critical Thinking One of education’s primary goals is to groom the next generation of little humans to succeed in the “real world.” Yes, there are mounds of curricula they must master in a wide breadth of subjects, but education does not begin and end with a textbook or test. Other skills must be honed, too, not the least of which is how to get along with their peers and work well with others. Students must be engaged and cooperation must be practiced, and often. 10 Team-Building Games That Promote Collaborative Critical Thinking 1. This team-building game is flexible. You can recycle this activity throughout the year by adapting the challenge or materials to specific content areas. Skills: Communication; problem-solving 2. This activity can get messy and may be suitable for older children who can follow safety guidelines when working with raw eggs. Skills: Problem-solving, creative collaboration 3. Zoom is a classic classroom cooperative game that never seems to go out of style. 4. 5. 6. 7. 8. 10.

critical thinking model and mods Games and your brain: how to use gamification to stop procrastinating 1.4K Flares Filament.io 1.4K Flares × It is Thursday afternoon. Hump day. You are being humped. The one thing you wished to accomplish today remains unaccomplished, sitting there as a painful reminder of your failure, goading you to check Tumblr just one more time. And there’s your answer! Turning repetitive tasks into games is the secret sauce to getting things done. Where did gamification come from in the first place? The idea behind gamification—challenge, motivation, reward— have been present in video games from the start, and it was gaming’s growth from niche to mainstream in the 2000s that helped push game mechanics into new industries and fields. The spark for the gamification boom is often traced to technology apps like Foursquare, which popularized ubiquitous badges for highly engaged users, and social games like Zynga’s FarmVille, which achieved huge commercial success on Facebook with its infinite reward system. Why our brains are so attracted to playing games (image via) 1.) 2.)

How PowerPoint is killing critical thought | Andrew Smith I still remember the best lecture I ever attended. It was part of a joint series offered by the English and philosophy departments in my first term at university and, given that the subject was Sartre’s Being and Nothingness, should have been the dullest event in Christendom that night. But it wasn’t. The lecturer, Thomas Baldwin, had a deceptively simple style: he would write a proposition on the blackboard facing us and gaze at it for a moment, like a medium beckoning a spirit. Then he would turn and smile, and start to explain. Baldwin paced the room – but slowly. Baldwin’s talk came to mind recently when I listened to a debate, on Radio 4’s Today show, about lecturing standards at British universities. “Did the lecturer use PowerPoint?” “Hm. PowerPoint is so ubiquitous that Lotte hadn’t made the connection. Let’s stay with teaching a moment. So, a few bored students: how serious is this? And bored is the least of it.

Deeper Learning: Performance Assessment and Authentic Audience In a conversation with a veteran educator -- a man with years of experience teaching English and acting as a headmaster -- I was confronted with a prejudice so ingrained in my teaching that I was almost embarrassed to admit it. He said, "You know, when I ask a student to write a paper and turn it in to me, that's ridiculous; I'm the worst audience they could have." I was intrigued. He went on, "Who am I to assume that someone will want to write their best work, something truly personal and creative, for me? A single-person audience is a pretty lame audience, let alone the fact that I'm a middle-aged white guy." That hit me like a rolled-up newspaper. As I absorbed this veteran educator’s words, I realized that not only was I wrong in my assumption that I (or any teacher) is a meanigful audience, but also that my assumptions about how grading and assessment work were so far removed from modern research that I might as well have been a 21st-century doctor treating humours. This matters. 1. 2.

Study: There Are Instructions for Teaching Critical Thinking Whether or not you can teach something as subjective as critical thinking has been up for debate, but a fascinating new study shows that it’s actually quite possible. Experiments performed by Stanford's Department of Physics and Graduate School of Education demonstrate that students can be instructed to think more critically. It’s difficult to overstate the importance of critical-thinking skills in modern society. The ability to decipher information and interpret it, offering creative solutions, is in direct relation to our intellect.2 The study took two groups of students in an introductory physics laboratory course, with one group (known as the experimental group) given the instruction to use quantitative comparisons between datasets and the other group given no instruction (the control group). Comparing data in a scientific manner; that is, being able to measure one’s observations in a statistical or mathematical way, led to interesting results for the experimental group.

Eight Ways of Looking at Intelligence Big Ideas In “Thirteen Ways of Looking At A Blackbird,” poet Wallace Stevens takes something familiar—an ordinary black bird—and by looking at it from many different perspectives, makes us think about it in new ways. With apologies to Stevens, we’re going to take the same premise, but change the subject by considering eight ways of looking at intelligence—eight perspectives provided by the science of learning. A few words about that term: The science of learning is a relatively new discipline born of an agglomeration of fields: cognitive science, psychology, philosophy, neuroscience. Its project is to apply the methods of science to human endeavors—teaching and learning—that have for centuries been mostly treated as an art. As with anything to do with our idiosyncratic and unpredictable species, there is still a lot of art involved in teaching and learning. 1. Situations can be internal or external. On one level this is obvious, but on another it is quite radical. 2. 3. 4. 5. 6. 7. 8.

How to Be an Individual in Age of the Echo Chamber by Steven Mazie By BRUCE PEABODY, guest blogger Last week, we considered how M.T. Anderson’s novel Feed lays out a set of fears about today’s electronic culture and its impact on how we think, interact and develop our moral selves. Anderson voices widespread anxieties about the internet age, but his book is rather short on solutions and hope. Today’s post proposes that we train our gazes to the 19th century, and the political and social philosophy of John Stuart Mill, in order to search for ways out of Anderson’s dystopian landscape. Even ostensibly free citizens, Mill charges, rely too much on convention, shared ideas, and generic experiences fostered by a “unity of opinion.” Mill especially feared non-discriminating mass publics. Mill’s antidote to all of this is a partly familiar model of robust individualism. A person “whose desires and impulses are his own—are the expression of his own nature, as it has been developed and modified by his own culture” can be said to have “character.”