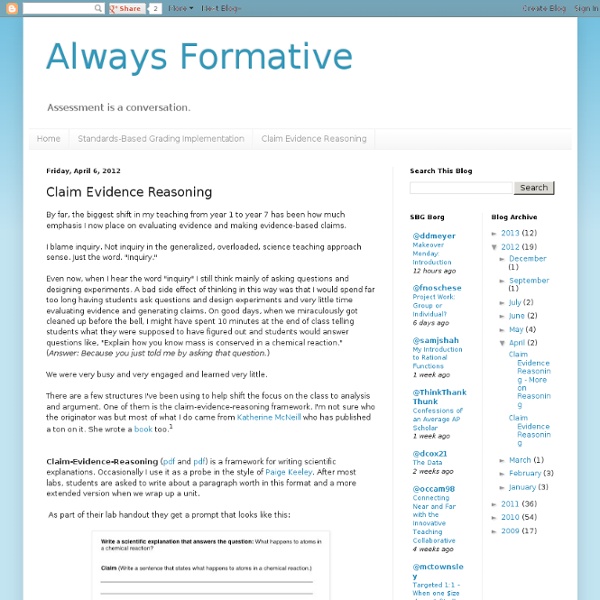 By far, the biggest shift in my teaching from year 1 to year 7 has been how much emphasis I now place on evaluating evidence and making evidence-based claims. I blame inquiry. Not inquiry in the generalized, overloaded, science teaching approach sense. Even now, when I hear the word "inquiry" I still think mainly of asking questions and designing experiments. We were very busy and very engaged and learned very little. There are a few structures I've been using to help shift the focus on the class to analysis and argument. Claim-Evidence-Reasoning (pdf and pdf) is a framework for writing scientific explanations. As part of their lab handout they get a prompt that looks like this: As the year goes on I remove most of the scaffolds until ultimately the students just get a prompt or question. I've been happy with it. I like frameworks a lot. The key to implementation is that the structure of the class really has to be designed around C-E-R. I also give my students a whiteboard format now.

Designing Science Inquiry: Claim + Evidence + Reasoning = Explanation In an interview with students, MIT's Kerry Emmanuel stated, "At the end of the day, it's just raw curiosity. I think almost everybody that gets seriously into science is driven by curiosity." Curiosity -- the desire to explain how the world works -- drives the questions we ask and the investigations we conduct. Let's say that we are planning a unit on matter. By having students observe solids and liquids, we have helped them define matter as something that has mass (or weight -- don’t worry about the difference with elementary kids!) Is air matter? Next, we can ask our students what data they need to answer the question, and how they can collect that data -- how they can investigate. According to the CER model, an explanation consists of: A claim that answers the question Evidence from students' data Reasoning that involves a "rule" or scientific principle that describes why the evidence supports the claim Your students might suggest the following explanation: Air is matter (claim).

Scientific Writing Scaffolds As a department we've been working on different writing scaffolds. We use Constructing Meaning as a school which I think is mostly good. We've tried all kinds of different writing frames with varying degrees of success. Most of these come from Constructing Meaning. I'm going to take you in chronological order. This was one of our first attempts. It was our sixth graders' first or second try at extended science writing. We pulled two main lessons from this. 1. 2. Next attempts: This is just the first page but the back is similar. Below is an even more generalized example. We go back and forth about word banks. Most recently we gave all of our sixth graders a prompt from the textbook about whether or not the government should provide flood insurance. On my end, all they got was a graphic organizer. I put the claim at the bottom because I wanted them to go through each argument first before deciding on a claim. I was very happy with the results here.

Claim, Evidence, Reasoning Example 1 Claim, Evidence, Reasoning: Tools to Introduce CER in PD and Instruction | Science for All I have been digging into Joseph Krajcik and Katherine McNeill’s book- Supporting Grade 5-8 Students in Constructing Explanations in Science- and I highly recommend it to any upper elementary and middle school teacher of science. The book provides a very clear and engaging look at how to use a Claim, Evidence, Reasoning (CER) framework to improve student writing and discourse in science. The CER framework can support not only science explanations but also the Common Core State Standards’ focus on using evidence and argumentation in math and English/Language Arts. As I’ve been moving through the book, I’ve developed some tools that could be useful for professional development providers, professional learning communities, and ultimately students who are engaging with a CER framework. Resources: 1. 2. Is it a Claim? 3. Please let me know if you have any revisions/changes/improvements to any of these documents. Like this: Like Loading...

Why Does the Water Rise? This experiment requires the use of matches... and that means adult supervision. Fill a plastic cup up with water. About 9 oz. should do the trick. Add 2 or 3 drops of food coloring to the water. The candle flame heats the air in the vase, and this hot air expands. A common misconception regarding this experiment is that the consumption of the oxygen inside of the bottle is also a factor in the water rising. To further demonstrate how the expansion and contraction of air within a bottle can cause water to rise, try this experiment using hot and cold water: Use the same colored water as you used in the candle experiment.

Scientific Synopsis - Writing Center - The University of Oklahoma First a little background… This is by no means a comprehensive guide. I imagine that an internet search on “science writing” and “writing a synopsis” would turn up similar tips and tricks, including ones that I have perhaps neglected. I have, however, noticed some similar challenges writers face in crafting science synopses and other science reports during my time as a Writing Fellow and Consultant and would like to give you some tips for success in science writing. A synopsis is intended to help you think critically about an article. Thinking critically means that you have read the article and understand the main points and are able to connect those points to the overarching idea the author is trying to convey. My tips fall into two main categories: organization and clear, concise writing. Organization If you begin to write without taking time to organize your thoughts, your synopsis may lack “flow,” or smooth transitions that connect one idea to another. Be Clear and Concise

Does Knuckle Cracking Lead to Arthritis? 3 CER Examples based on FUN Science! CER is an awesome format to teach science students, but CER examples are lacking. CER stands for Claim, Evidence, and Reasoning. It is a great format for writing explanations is it serves to tie together findings, data, and scientific principles. I am beginning to use CER with my classes and I love it. Part of the difficulty with coming up with our own CER examples from science journals is due to the articles themselves. We found an excellent source of articles to use for CER examples. Getting Articles From Ignoble (yes, that’s a word) Science Our source of research articles for CER examples comes from the list of Ig Nobel Prize winners. The complete list of Ig Nobel Prize winners is published online. 2015 Ig Nobel Prize in Entomology REFERENCE: Michael L. 2009 Ig Nobel Prize in Medicine REFERENCE: “Does Knuckle Cracking Lead to Arthritis of the Fingers?” 2016 Ig Nobel Prize in Physics Putting it all together CER examples can be both fun AND connected to real scientific research. Related

Teaching Critical Thinking Teaching Critical Thinking Reasoning from Evidence to Claims In addition to evaluating the reliability of evidence, one must ask whether the movement from evidence to claims or sub-claims is warranted. Certain tests for reasoning are especially useful in particular fields (e.g., tests of statistical reasoning). However, some questions about reasoning from evidence are widely helpful. Is enough evidence provided to warrant generalization? Another approach to evaluating reasoning involves spotting logical fallacies—errors of reasoning which occur so frequently that they have been named. Attacks on character : Arguing that someone’s ideas should be rejected because he or she has a particular trait, even though the trait isn’t relevant to the discussion. Activities and Assignments (L) Can be done in large section courses What’s the Point? Have students read or listen to an argument and list each piece of evidence they encounter on the following worksheet. What’s Enough? What’s Missing?