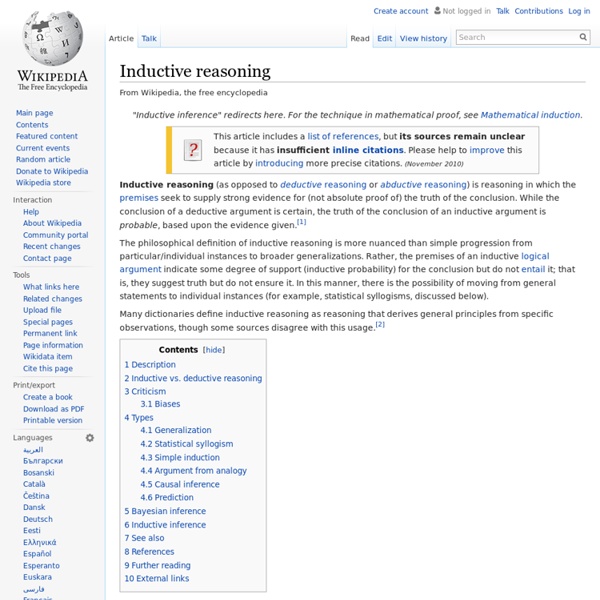 Abductive reasoning Form of logical inference which seeks the simplest and most likely explanation Abductive reasoning (also called abduction,[1] abductive inference,[1] or retroduction[2]) is a form of logical inference formulated and advanced by American philosopher Charles Sanders Peirce beginning in the last third of the 19th century. It starts with an observation or set of observations and then seeks the simplest and most likely conclusion from the observations. This process, unlike deductive reasoning, yields a plausible conclusion but does not positively verify it. Abductive conclusions are thus qualified as having a remnant of uncertainty or doubt, which is expressed in retreat terms such as "best available" or "most likely". In the 1990s, as computing power grew, the fields of law,[6] computer science, and artificial intelligence research[7] spurred renewed interest in the subject of abduction.[8] Diagnostic expert systems frequently employ abduction.[9] Deduction, induction, and abduction[edit] .

Proof assistant An interactive proof session in CoqIDE, showing the proof script on the left and the proof state on the right. In computer science and mathematical logic, a proof assistant or interactive theorem prover is a software tool to assist with the development of formal proofs by human-machine collaboration. This involves some sort of interactive proof editor, or other interface, with which a human can guide the search for proofs, the details of which are stored in, and some steps provided by, a computer. Comparison of systems[edit] User interface[edit] See also[edit] Notes[edit] Jump up ^ Hunt, Warren; Matt Kaufmann; Robert Bellarmine Krug; J Moore; Eric W. References[edit] Henk Barendregt and Herman Geuvers (2001). External links[edit] Catalogues

Inference Various fields study how inference is done in practice. Human inference (i.e. how humans draw conclusions) is traditionally studied within the field of cognitive psychology; artificial intelligence researchers develop automated inference systems to emulate human inference. Statistical inference uses mathematics to draw conclusions in the presence of uncertainty. Definition[edit] The process by which a conclusion is inferred from multiple observations is called inductive reasoning. This definition is disputable (due to its lack of clarity. Two possible definitions of "inference" are: A conclusion reached on the basis of evidence and reasoning.The process of reaching such a conclusion. Examples[edit] Example for definition #1[edit] Ancient Greek philosophers defined a number of syllogisms, correct three part inferences, that can be used as building blocks for more complex reasoning. All humans are mortal.All Greeks are humans.All Greeks are mortal. Now we turn to an invalid form. ? (where ? ?

Inductive Reasoning - The researcher begins with an open mind looking at the full picture to see what is going on. It uses research questions and comes under the logic of reasoning.

Inductive Reasoning - The philosophical idea that is related to the style of research in which the investigator employs a doctrine of curiosity to gather data relevant to a predetermined subject area, analyses it, and, on the basis of that analysis, postulates one or more theoretical conclusions.