The Makings of Maker Spaces, Part 1: Space for Creation, Not Just Consumption 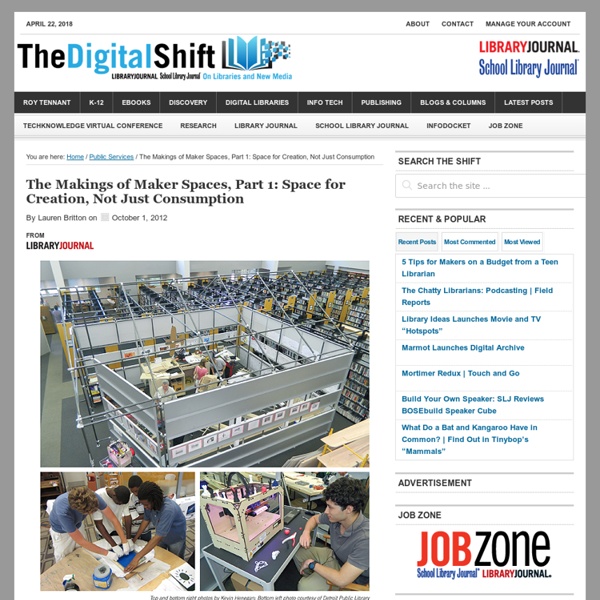 Maker spaces in libraries are the latest step in the evolving debate over what public libraries’ core mission is or should be. From collecting in an era of scarce resources to curation in an era of overabundant ones, some libraries are moving to incorporate cocreation: providing the tools to help patrons produce their own works of art or information and sometimes also collecting the results to share with other members of the ­community. Maker spaces promote learning through play; have the potential to demystify science, math, technology, and engineering; and encourage women and under­represented minorities to seek careers in those fields. They also tie in to the growing trend of indie artists in every medium—including books—who are bypassing traditional gatekeepers, taking advantage of new tools to produce professionally polished products, and going direct to the web to seek an audience. Libraries around the United States offer tools for patrons to learn by doingBy Lauren Britton R. Related:  Makerspaces

Situating Makerspaces in Schools - Hybrid Pedagogy America’s obsession with STEM is dangerous, Fareed Zakaria warns us, and our hunch is that most readers of Hybrid Pedagogy would tend to agree. We, Colin and Josh, certainly do. But the conversation that typically follows that headline rarely seems productive: a turf war for institutional priority and students’ time drawn on traditional disciplinary lines. Even when STEM advocates throw a bone to the value of creativity by adding “A” for Arts (making “STEAM”), the pendulum still swings, and the conversation never seems to advance. At the same time, “making” has turned into a “movement” and makerspaces are popping up in communities all around the US. Makerspaces don’t fit our traditional expectations of school, but here they come. Perhaps Zakaria has laid the groundwork for a cultural shift back towards the liberal arts, perhaps not. In our school community, we have situated learning through making by emphasizing an inclusive, values-based approach. Agency, authenticity, and audience

Library as Makerspace: Creating and Nurturing Communities of Teen Writers Original photograph by Buffy Hamilton As part of our makerspace initiative this year (please see this blog post and this slidedeck here) and inspired by the work of the Sacramento Public Library, one of my focal points is thinking about ways the library can support creating communities of readers and writers who are crafting and composing texts (and I use the term text rather liberally). The Sacramento Public Library Winter 2012 “Write at iStreet Press” writing and publishing catalog offers a model of what the library as a makerspace for constructing texts looks like in a community through the public library. Possible topics I’m interested in offering as “lunch and learn” sessions or after-school sessions could include (but are not limited to!): Creative writing (memoirs, poetry, short stories, novels) and writer’s craftSelf publishing options (print as well as eBook/eInk)Academic writing Digital and/or multimodal compositionMultigenre writingStorytelling Like this: Like Loading...

Makerspace in your school library Earlier this year I wrote a post about Hackerspaces and Makerspaces, after attending the Computers in Libraries conference in Washington. I met up with Buffy Hamilton for lunch, and as ever was inspired with the responsive way she grabs an initiative and runs with it. So I wasn’t surprised to find Buffy writing Makerspaces, Participatory Learning, and Libraries where she ‘nailed’ the opportunity. Now here she is, putting forward the New Chapter for 2012-2013 proposal for A Makerspace Culture of Learning at the Unquiet Library. Love it! In a sense, this is not a new concept at all, particularly for primary schools, as kids are hands-on and experimental in their classroom experiences. Hackerspaces and makerspaces provide outstanding opportunities for synergy in our new learning environments. Image: cc licensed ( BY NC SD ) flickr photo shared by Pete Prodoehl

A Makerspace Takes Over A Local Library Makerspaces just might take over libraries. School of Information Studies professor Dave Lankes seems to think so. In his presentation to New York State librarians earlier this month, he asked the roomful of librarians to imagine libraries as places for people to learn and create, not consume and check out. What’s a Makerspace? The iSchool is Training Future Maker Enablers Students in the graduate program in Library and Information Science (LIS) at the iSchool are challenged to think beyond the typical ideas of librarianship and ignite the imaginations of our communities to better society. A 3D Printer In a Public LibraryOne recent iSchool LIS graduate has come up with an innovative project meant to engage the imagination of her library’s community, and it’s been getting lots of press in places like Forbes online, Boing Boing, and KQED. The Fayetteville Free Library has the unique opportunity to be the first library in the United States to build a free, public access Fab Lab.

School Libraries and Makerspaces: Can They Coexist? More and more schools are coming to value maker education and exploring ways to create makerspaces in their schools. Many schools are discussing how they might utilize their library to facilitate this. As my school has increased our commitment to constructionist learning and maker education over the last few years, we have done so in close collaboration with our school library. In exploring the relationship between the school library and school makerspace, it's not difficult to see why conversations about the growth of makerspaces are often tied to the conversation about the future of libraries. Both makerspaces and libraries are constructivist learning spaces that share a number of common goals, while approaching them in different ways and through very different material resources. Similar Yet Distinct Makerspaces and libraries are sites of informal learning. Libraries and makerspaces are inherently interdisciplinary spaces. Makerspaces and libraries are more than just resource closets.

Want to Start a Makerspace at School? Tips to Get Started As the Maker Movement starts to gain momentum, schools that are trying to find ways to foster the do-it-yourself environment can learn a few lessons from another nexus in the universe: public libraries. Dale Dougherty, founding editor and publisher of Make Magazine — and the de facto leader of the Maker Movement — has a vision to create a network of libraries, museums, and schools with what he calls “makerspaces” that draw on common resources and experts in each community. Libraries and museums, he said, are easier places to incorporate makerspaces than schools, because they have more space flexibility and they’re trying to attract teens with their programs. “Schools have already got the kids,” Dougherty noted wryly, at the recent American Library Association Midwinter Meeting in Seattle. Schools can learn from libraries that participated in the inaugural Maker Camps last summer. “Why are you here?” But not every space is alike, or even appropriate. Related

Making Things in Academic Libraries The past few months have seen lots of discussion about makerspaces in libraries. What’s a makerspace? Buffy Hamilton’s great post over at the Unquiet Librarian has a couple of good definitions, but essentially it’s a place for folks to make things, perhaps writing and illustrating a zine, using the open source Arduino computing platform to program a robot, screenprinting, or creating model houses with a 3D printer. Makerspaces often include tools and equipment that are too expensive or specialized for most people to have in their homes, as well as provide a gathering place for like-minded hobbyists to create and collaborate. Makerspaces seem like a great fit for public libraries, which often run programs designed to teach new skills and to create something, like an arts and crafts hour for kids. What could a makerspace look like in an academic library?