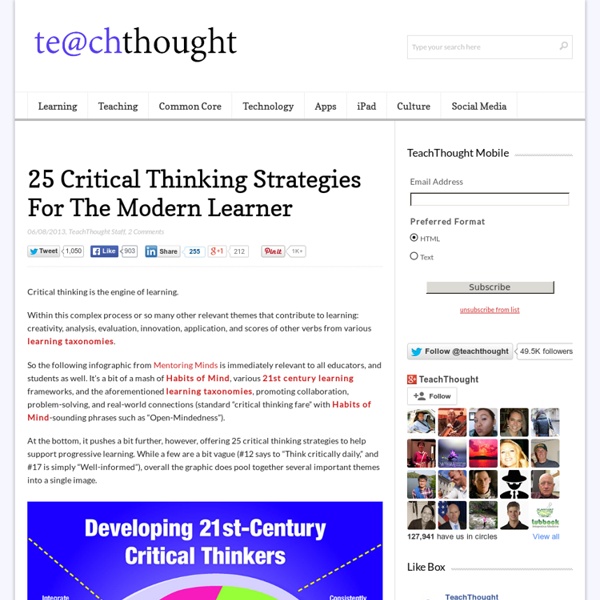 Critical thinking is the engine of learning. Within this complex process or so many other relevant themes that contribute to learning: creativity, analysis, evaluation, innovation, application, and scores of other verbs from various learning taxonomies. So the following infographic from Mentoring Minds is immediately relevant to all educators, and students as well. It’s a bit of a mash of Habits of Mind, various 21st century learning frameworks, and the aforementioned learning taxonomies, promoting collaboration, problem-solving, and real-world connections (standard “critical thinking fare” with Habits of Mind-sounding phrases such as “Open-Mindedness”). At the bottom, it pushes a bit further, however, offering 25 critical thinking strategies to help support progressive learning. While a few are a bit vague (#12 says to “Think critically daily,” and #17 is simply “Well-informed”), overall the graphic does pool together several important themes into a single image.

thinking skills There is no logic in connecting an office copier with 'nose'. That is to say, there is no 'logic' in our normal undertanding of logic. This understanding is based on passive surface information systems. There is, however, the logic of active surface information systems, and that is the logic of a patterning system. In such a system, the putting together of 'copier' with the random input 'nose' is perfectly logical. At the same time, the juxtaposition is a logic of action.

Schooling Ourselves in an Unequal America Averages can be misleading. The familiar, one-dimensional story told about American education is that it was once the best system in the world but that now it’s headed down the drain, with piles of money thrown down after it. The truth is that there are two very different education stories in America. The children of the wealthiest 10 percent or so do receive some of the best education in the world, and the quality keeps getting better. For most everyone else, this is not the case. {5 Steps Series} 5 Simple Steps to Get Kids to Read More (a lot more) It’s the beginning of a new school year. Teachers are talking up reading (and they should), assigning a specific number of minutes each evening (maybe they shouldn’t), and asking parents to sign off on said # of minutes of reading per day (a generally bad idea). Reading is important. No doubt. In this short post, I’ll lay out a few simple steps to get students to read more.

Who Cares About Conditions in Overseas Factories? Who Cares About Conditions in Overseas Factories? By: Robert J. Bowman, SupplyChainBrain | June 10, 2013 Not a chance. Recall the headlines of just the last few months. Three separate disasters in Bangladesh garment factories alone: the November, 2012 fire in Tazreen, where 112 people died due to â€œgross negligenceâ€ by management; the collapse in April of an eight-story factory complex outside the capital city of Dhaka, killing more than 1,000, and a May 8 fire in a Dhaka sweater factory, resulting in eight deaths.

Solving Wicked Problems 1. How can we design meaningful learning experiences that support studnet problem solving? Though we often emphasize the importance of problem centered learning environments, it is hard to find a comprehensive approach to designing such environments. Eight Ways of Looking at Intelligence Big Ideas In “Thirteen Ways of Looking At A Blackbird,” poet Wallace Stevens takes something familiar—an ordinary black bird—and by looking at it from many different perspectives, makes us think about it in new ways. With apologies to Stevens, we’re going to take the same premise, but change the subject by considering eight ways of looking at intelligence—eight perspectives provided by the science of learning. A few words about that term: The science of learning is a relatively new discipline born of an agglomeration of fields: cognitive science, psychology, philosophy, neuroscience. Its project is to apply the methods of science to human endeavors—teaching and learning—that have for centuries been mostly treated as an art. As with anything to do with our idiosyncratic and unpredictable species, there is still a lot of art involved in teaching and learning.

Third Grade Health Adventure Have you ever heard the expression "You are what you eat!"? When people say that they don't mean that eating a hamburger will actually make you turn into a hamburger. They mean that your food choices affect your health and how well your body functions. If you make unhealthy food choices, your body will not be as healthy as it should be and it will not function as well as it could.

Games and your brain: how to use gamification to stop procrastinating 1.4K Flares Filament.io 1.4K Flares × It is Thursday afternoon. Hump day. You are being humped. The one thing you wished to accomplish today remains unaccomplished, sitting there as a painful reminder of your failure, goading you to check Tumblr just one more time. The Power of Project Learning By Wayne D'Orio Here’s a riddle: Imagine there is a learning technique proven effective through 100 years of use that is now enhanced by the power of today’s technology. Imagine it can excite learners to continue their work well past the parameters of the school day. What is it, and would every school in the country do it? It is project-based learning, and the answer is yes, and no. Project-based learning can be traced back to John Dewey and it has come and gone since the early 20th century.

Critical Thinking Abilities Weak versus Strong Critical Thinking Critical thinking involves basic intellectual skills, but these skills can be used to serve two incompatible ends: self-centeredness or fair-mindedness. As we develop the basic intellectual skills that critical thinking entails, we can begin to use those skills in a selfish or in a fair-minded way. In other words, we can develop in such a way that we learn to see mistakes in our own thinking, as well as the thinking of others. 4 Ways To Amplify Your Creativity The holidays are over, the weather is lousy, and we’re sober again. We made all kinds of New Year’s promises, but the big one that will change our careers, if not our lives, is the promise to ourselves to become more creative. In my new book, Creative Intelligence, I show that creativity is learned behavior that gets better with training--like sports.