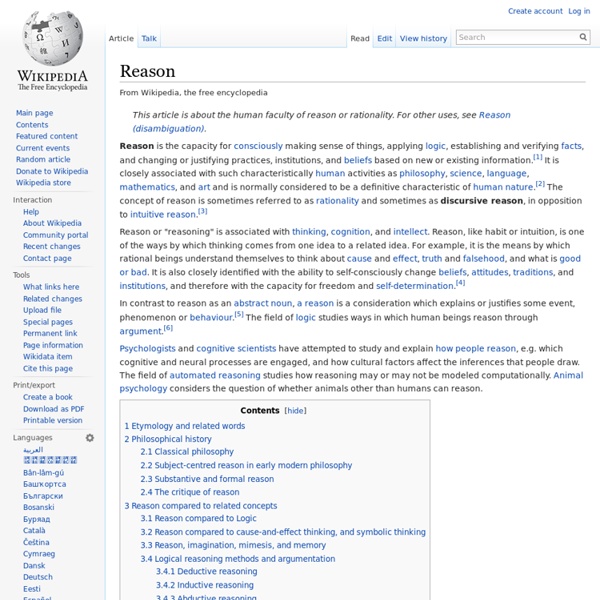 Psychologists and cognitive scientists have attempted to study and explain how people reason, e.g. which cognitive and neural processes are engaged, and how cultural factors affect the inferences that people draw. The field of automated reasoning studies how reasoning may or may not be modeled computationally. Animal psychology considers the question of whether animals other than humans can reason. Etymology and related words[edit] In the English language and other modern European languages, "reason", and related words, represent words which have always been used to translate Latin and classical Greek terms in the sense of their philosophical usage. The original Greek term was "λόγος" logos, the root of the modern English word "logic" but also a word which could mean for example "speech" or "explanation" or an "account" (of money handled).[7]As a philosophical term logos was translated in its non-linguistic senses in Latin as ratio. Philosophical history[edit] Classical philosophy[edit] Related:  Philosophy

To Live at All is Miracle Enough I read Richard Dawkins book ‘Unweaving the Rainbow’ a little while ago and there was a part that really brought me up short with one of those ‘WOW’ moments. It really brings home the sheer unliklihood and odds against any of us actually being born and being able to experience and enjoy this only too brief sojourn on earth. I have been thinking about it quite a bit lately and really wanted to reread it again. Excerpt from Chapter I, “The Anaesthetic of Familiarity,”of Richard Dawkins 1998 book Unweaving the Rainbow 'We are going to die, and that makes us the lucky ones. Moralists and theologians place great weight upon the moment of conception, seeing it as the instant at which the soul comes into existence. Napoleon started it all. Morris tells how his ancestor's enforced change of career had various knock-on effects culminating in his own interest in natural history. This is another respect in which we are lucky. In spite of these odds, you will notice that you are, as a , alive.

Abductive reasoning Abductive reasoning (also called abduction,[1] abductive inference[2] or retroduction[3]) is a form of logical inference that goes from an observation to a hypothesis that accounts for the observation, ideally seeking to find the simplest and most likely explanation. In abductive reasoning, unlike in deductive reasoning, the premises do not guarantee the conclusion. One can understand abductive reasoning as "inference to the best explanation".[4] The fields of law,[5] computer science, and artificial intelligence research[6] renewed interest in the subject of abduction. Diagnostic expert systems frequently employ abduction. History[edit] The American philosopher Charles Sanders Peirce (1839–1914) first introduced the term as "guessing".[7] Peirce said that to abduce a hypothetical explanation from an observed circumstance is to surmise that may be true because then would be a matter of course.[8] Thus, to abduce from involves determining that is sufficient, but not necessary, for allows deriving

Belief Belief is a mental representation, treated in various academic disciplines, especially philosophy and psychology, of a sentient being's attitude toward the likelihood or truth of something.[1] From Greek two different concepts are often represented by the concept of belief: Pistis and Doxa. Simplified we may say that the first deals in trust and confidence, the latter in opinion and acceptance. Knowledge and epistemology[edit] The terms belief and knowledge are used differently in philosophy. As a psychological phenomenon[edit] Mainstream psychology and related disciplines have traditionally treated belief as if it were the simplest form of mental representation and therefore one of the building blocks of conscious thought. The concept of belief presumes a subject (the believer) and an object of belief (the proposition). This has important implications for understanding the neuropsychology and neuroscience of belief. Belief-in[edit] Belief-that, delusion[edit] Formation[edit] Desirability

Top 100 Western Philosophers: from Ancient to Contemporary Philosophers This article shows the top 100 most important philosophers in the Western civilization from the ancient Greek classics such As Socrates, Plato and Aristotle’s to contemporary philosophers such as Levi-Strauss and Foucault, passing by great masters such as Descartes or Spinoza. What is Philosophy? The word "philosophy" comes from the Greek philosophia, which literally means "love of wisdom". Topics The Ancient Philosophers Ancient philosophy is that of the Greco-Roman world from the 6th century BC to the 6th century AD. The most important of the ancient philosophers (in terms of subsequent influence) are Plato and Aristotle. Top Ancient Philosophers The top ancient philosophers include: Thales of MiletosPythagoras of SamosXenophanes of ColophonParmenides of EleaHeraclitesZeno of EleaSocratesPlatoAristotleDemocritusEpicurusDiogenes of SinopeMarcus Tullius CiceroPhilo of AlexandriaLucius Anneas SenecaMarcus AureliusSextus EmpiricusPlotinus Thales of Miletos Learn more about Thales. Heraclites Plato

Baruch Spinoza 1. Biography Bento (in Hebrew, Baruch; in Latin, Benedictus: all three names mean "blessed") Spinoza was born in 1632 in Amsterdam. He was the middle son in a prominent family of moderate means in Amsterdam's Portuguese-Jewish community. As a boy he had undoubtedly been one of the star pupils in the congregation's Talmud Torah school. And then, on July 27, 1656, Spinoza was issued the harshest writ of herem, or excommunication, ever pronounced by the Sephardic community of Amsterdam; it was never rescinded. To all appearances, Spinoza was content finally to have an excuse for departing from the community and leaving Judaism behind; his faith and religious commitment were, by this point, gone. 2. The Ethics is an ambitious and multifaceted work. 2.1 God or Nature “On God” begins with some deceptively simple definitions of terms that would be familiar to any seventeenth century philosopher. Proposition 1: A substance is prior in nature to its affections. Is Spinoza, then, a pantheist? 3.

Logical reasoning Informally, two kinds of logical reasoning can be distinguished in addition to formal deduction: induction and abduction. Given a precondition or premise, a conclusion or logical consequence and a rule or material conditional that implies the conclusion given the precondition, one can explain that: Deductive reasoning determines whether the truth of a conclusion can be determined for that rule, based solely on the truth of the premises. See also[edit] References[edit] T.

Perennial philosophy The Perennial philosophy (Latin: philosophia perennis), [note 1] also referred to as Perennialism, is a perspective in the philosophy of religion which views each of the world’s religious traditions as sharing a single, universal truth on which the foundation of all religious knowledge and doctrine has grown. Agostino Steuco (1497–1548) coined the term philosophia perennis,[1] drawing on the neo-Platonic philosophy of Marsilio Ficino (1433–1499) and Giovanni Pico della Mirandola (1463–94). In the early 19th century this idea was popularised by the Transcendentalists. Towards the end of the 19th century the Theosophical Society further popularized the concept under the name of "Wisdom-Religion" or "Ancient Wisdom".[2] In the 20th century it was popularized in the English-speaking world through Aldous Huxley's book The Perennial Philosophy as well as by the strands of thought which culminated in the New Age movement. Definition[edit] Origins[edit] Neo-Platonism[edit] Steuco[edit]