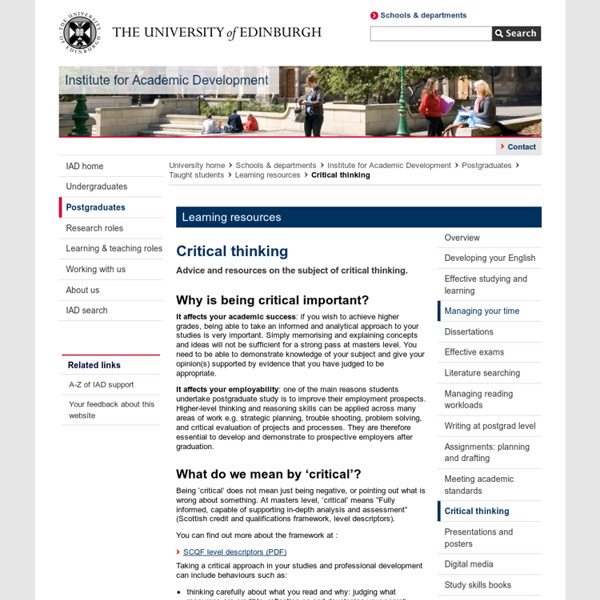 Advice and resources on the subject of critical thinking. Why is being critical important? It affects your academic success: if you wish to achieve higher grades, being able to take an informed and analytical approach to your studies is very important. It affects your employability: one of the main reasons students undertake postgraduate study is to improve their employment prospects. What do we mean by ‘critical’? Being ‘critical’ does not mean just being negative, or pointing out what is wrong about something. You can find out more about the framework at : SCQF level descriptors (PDF) Taking a critical approach in your studies and professional development can include behaviours such as: You can find out more about being critical in your studies in the following factsheets: Critical’ in University work means being thoughtful, asking questions, not taking things you read (or hear) at face value. Critical thinking ‘stairway’ Critical thinking: online guidance from the Open University Related:  think • New Learning Skills

untitled Divergent thinking – more than a mere tool – is a technique very commonly used on creative activities because it allows us to expand our brains a little bit, by looking for new opportunities and ways of getting things done. So, from the problem – or whatever triggers your creativity – to the solution, instead of taking obvious steps and walking on a straight line, you force yourself to see different aspects of the situation, using unusual points of view, no matter how abstract of absurd they seem at the first place. This can be done by allowing everyone to think more freely while working on the task, gathering ideas that have the slightest relation to the problem itself rather than looking straight for a practical solution. Though it might sound like a waste of time, many corporations have found appealing answers to their problems by using such method. Another misconception around the divergent thinking is that the creative process should be all about it.

Leonard Nimoy - photographer How to Ace Your Finals Without Studying I’ve never been that keen on studying before an exam. I rarely study for more than a half hour, even for big final exams worth more than half my grade. When I do study, I usually just skim over the material and do a few practice questions. For some of my math classes I have yet to do a single practice question for homework. Despite what some might point out as horrible studying habits, I’ve done very well for myself in school. It’s very easy to look at my successes and apparent lack of effort and quickly deem that it is an innate gift, impossible to replicate. Webs and Boxes The system I use for learning I’m going to call holistic learning. People who learn through compartments, try to organize their mind like a filing cabinet. Holistic learning takes an opposite approach. The chemistry exam I won for three provinces I wasn’t even taught over half the information on the test. Compartmentalized learning is an exercise in insanity. Very few people are purely compartmental learners.

Hearing Is Our Least Trustworthy Sense by Orion Jones We like to think we perceive the world just as everyone else does. That's what makes communication possible, and without a baseline reality, how would science proceed? But our sense of hearing is remarkably unreliable, say sound psychologists. And since hearing is one out of just five senses we use to perceive the world, that's a little concerning. Or one out of seven if you count proprioception and vestibular sensation — and hey, why not? Just yesterday, for example, I missed a call from an unfamiliar number, and because I haven't set up my voicemail yet (who needs it?!) Ironically, our sense of hearing is unreliable because of its robust ability to create meaning from otherwise random sounds. Diana Deutsch, sound psychologist at UC San Diego, says that how we hear sounds depends on the tonality of our mother tongue, which varies greatly from country to country. Read more at BBC Future.

Buzzword: Micro-learning I was introduced recently to a new buzz word making its way across the learning & development industry: Micro-learning. If you’re like me, you’re probably starting to get a bit tired of people adding their particular spin to learning – all in search of the holy grail that is the “right way” to make learning happen. It doesn’t exist. But having got that out of the way, it is worth looking at these ideas to see if there’s anything we, as learning professionals, can learn from them. As a term, “micro-learning” has been around since about 2004, when it was put forward in a PhD thesis by Gerhard Gassler. Basically, micro-learning describes a method of learning, whereby concepts and ideas are presented (or retrieved) in very small chunks, over very short time-scales, often at the point of need, or at the point of maximum receptiveness. Examples include: As can be seen from the examples above, micro-learning is generally pulled rather than pushed. ie. the learner dictates when they learn.

Rethinking thinking - Trevor Maber An excellent way to better understand the Ladder of Inference is to work in a small group and talk about a pattern of behavior that everyone can relate to. Some examples (in addition to the parking lot example) include: someone cutting in front of you in a line at the store; a friend or family member who is always annoyingly late; or someone who leaves you disappointed because he/she breaks more promises than he/she keeps. As you each share your experience, focus on what assumptions are at play, the conclusions you are each drawing from those assumptions, and what emotions you feel as a result. What are you seeing and learning as you hear how different everyone’s ladder can be?On one half of a sheet of paper, draw your own version of a ladder (make sure it has 7 rungs!)

The Science of “Chunking,” Working Memory, and How Pattern Recognition Fuels Creativity by Maria Popova “Generating interesting connections between disparate subjects is what makes art so fascinating to create and to view… We are forced to contemplate a new, higher pattern that binds lower ones together.” It seems to be the season for fascinating meditations on consciousness, exploring such questions as what happens while we sleep, how complex cognition evolved, and why the world exists. The process of combining more primitive pieces of information to create something more meaningful is a crucial aspect both of learning and of consciousness and is one of the defining features of human experience. What makes the difference, Bor argues, is a concept called chunking, which allows us to hack the limits of our working memory — a kind of cognitive compression mechanism wherein we parse information into chunks that are more memorable and easier to process than the seemingly random bits of which they’re composed. This young man had, essentially, mastered exponential chunking.

Guanxi For the autonomous region, see Guangxi. Guanxi describes the basic dynamic in personalized networks of influence, and is a central idea in Chinese society. In Western media, the pinyin romanization of this Chinese word is becoming more widely used instead of the two common translations—"connections" and "relationships"—as neither of those terms sufficiently reflects the wide cultural implications that guanxi describes.[1] Guanxi has a major influence on the management of businesses based in China, and also those owned by overseas Chinese in Southeast Asia, known as the bamboo network.[2] Description and usage[edit] At its most basic, guanxi describes a personal connection between two people in which one is able to prevail upon another to perform a favor or service, or be prevailed upon. Guanxi refers to the benefits gained from social connections and usually extends from extended family, school friends, workmates and members of common clubs or organizations. Usage examples[edit]

Formula for success in learning If you have found this place in the vast cyberspace of the web, you are probably not the one to convince that knowledge is power, and that solutions to most problems facing humanity could be found if we were armed with more understanding of how the world works. While knowledge is power, information can be overpowering. An increasing proportion of the population suffers from Information Fatigue Syndrome, i.e. from stress related to being overwhelmed with an unmanageable glut of information. This text introduces you to simple steps toward managing information and toward rock-solid knowledge. I have been working on the problem of effective learning for 16 years now since, as a student of molecular biology, I first understood how I could greatly change the quality of all my actions were I able to improve the recall of what I studied for exams (and not only). You may find the first three points obvious. This is the shortest path to empowering knowledge: Further reading

Chimps, Like Humans, Act Out When They Know They're Right by Monica Joshi Chimpanzees are marvelous creatures. Jane Goodall has spent her whole life trying to understand them. Researchers at Georgia State University, Agnes Scott College, Wofford College, and the University at Buffalo, The State University of New York have discovered that chimpanzees not only are capable of metacognition, but also can adjust their behaviour based on this metacognition. Published in the journal Cognition, their findings suggest that this reflects a form of cognition control that underlies intelligent decision-making across species. Humans are able to report confidence in a few different ways such as: using an oral reportage of confidence or lack thereof, numerical rating scales, and body language. In the course of the study, three chimps were tested using a series of computerized tests. One thing that they wanted to replicate in the study was something that chimps do all day in a forest: leaping from one branch to another without hesitation.

How 30 Minutes a Day Can Increase Your Intelligence If you ask me, where humans go wrong is with their lack of patience. That, and their recent acquired taste for instant gratification. The reality is that things take time. Richard Branson didn’t become a millionaire overnight. Madonna was not an overnight success. That said, it’s actually pretty easy to improve yourself. Because most people don’t bother. The majority of people don’t do a single thing to improve themselves. So I’ve come up with a new theory: The Half Hour Theory. I love it because it’s actually pretty easy to integrate into your life. This could take the form of half an hour’s reading every day. You may even want to improve the speed of your reading so you can learn faster. This theory could even rely on you taking a half an hour every day spending time on the Internet, researching into something that really interests you. Here’s how to implement The Half Hour Theory: (Photo credit: Post-It Note on Screen via Shutterstock)