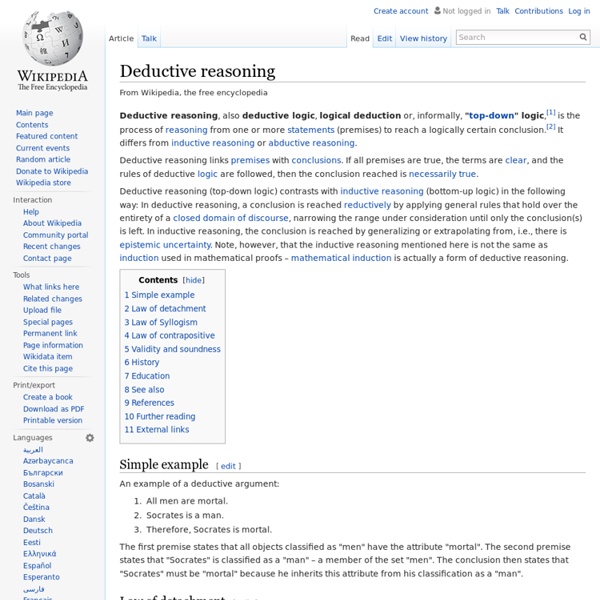 Faulty generalization A faulty generalization is a conclusion about all or many instances of a phenomenon that has been reached on the basis of just one or just a few instances of that phenomenon.[1] It is an example of jumping to conclusions. For example, we may generalize about all people, or all members of a group, based on what we know about just one or just a few people. If we meet an angry person from a given country X, we may suspect that most people in country X are often angry. If we see only white swans, we may suspect that all swans are white. Faulty generalizations may lead to further incorrect conclusions. Expressed in more precise philosophical language, a fallacy of defective induction is a conclusion that has been made on the basis of weak premises. Logic[edit] The proportion Q of the sample has attribute A. Therefore, the proportion Q of the population has attribute A. Inductive fallacies[edit] Hasty generalization[edit] Examples[edit] Hasty generalization usually shows the pattern See also[edit]

Reason Reason is the capacity for consciously making sense of things, establishing and verifying facts, applying logic, and changing or justifying practices, institutions, and beliefs based on new or existing information.[1] It is closely associated with such characteristically human activities as philosophy, science, language, mathematics, and art and is normally considered to be a distinguishing ability possessed by humans.[2] Reason, or an aspect of it, is sometimes referred to as rationality. Using reason, or reasoning, can also be described more plainly as providing good, or the best, reasons. For example, when evaluating a moral decision, "morality is, at the very least, the effort to guide one's conduct by reason—that is, doing what there are the best reasons for doing—while giving equal [and impartial] weight to the interests of all those affected by what one does."[7] Etymology and related words[edit] Philosophical history[edit] Classical philosophy[edit] The critique of reason[edit]

Jumping to conclusions Jumping to conclusions (officially the jumping conclusion bias, often abbreviated as JTC, and also referred to as the inference-observation confusion[1]) is a psychological term referring to a communication obstacle where one "judge[s] or decide[s] something without having all the facts; to reach unwarranted conclusions".[2][3] In other words, "when I fail to distinguish between what I observed first hand from what I have only inferred or assumed".[1] Because it involves making decisions without having enough information to be sure that one is right, this can give rise to bad or rash decisions. Subtypes[edit] Three commonly recognized subtypes are as follows:[4][5] Mind reading – Where there is a sense of access to special knowledge of the intentions or thoughts of others. Information[edit] Jumping to conclusions is a form of cognitive distortion. It is easy for interviewers to jump to conclusions, often resulting in a "costly hiring error due to false inference". Comedy[edit]

Gravity Gravity, or gravitation, is a natural phenomenon by which all things with mass or energy—including planets, stars, galaxies, and even light[1]—are brought toward (or gravitate toward) one another. On Earth, gravity gives weight to physical objects, and the Moon's gravity causes the ocean tides. The gravitational attraction of the original gaseous matter present in the Universe caused it to begin coalescing, forming stars – and for the stars to group together into galaxies – so gravity is responsible for many of the large scale structures in the Universe. Gravity has an infinite range, although its effects become increasingly weaker on farther objects. Gravity is the weakest of the four fundamental forces of physics, approximately 1038 times weaker than the strong force, 1036 times weaker than the electromagnetic force and 1029 times weaker than the weak force. History of gravitational theory Scientific revolution Newton's theory of gravitation Equivalence principle General relativity Tests

Irrelevant conclusion Irrelevant conclusion should not be confused with formal fallacy, an argument whose conclusion does not follow from its premises. Overview[edit] Ignoratio elenchi is one of the fallacies identified by Aristotle in his Organon. In a broader sense he asserted that all fallacies are a form of ignoratio elenchi.[3][4] Ignoratio Elenchi, according to Aristotle, is a fallacy which arises from "ignorance of the nature of refutation". ● Example 1: A and B are debating as to whether criticizing indirectly has any merit in general. A: There is no point in people ranting on social media about politics; the president is not going to read it anyway. B: But it is their social media. A: Well, I do not keep up with it anyway. ● Example 2: A and B are debating about the law. A: Does the law allow me to do that? B: The law should allow you to do that because this and that. B missed the point. Etymology[edit] The phrase ignoratio elenchi is from Latin, meaning 'an ignoring of a refutation'. See also[edit]

Argument In a typical deductive argument, the premises are meant to provide a guarantee of the truth of the conclusion, while in an inductive argument, they are thought to provide reasons supporting the conclusion's probable truth.[6] The standards for evaluating non-deductive arguments may rest on different or additional criteria than truth, for example, the persuasiveness of so-called "indispensability claims" in transcendental arguments,[7] the quality of hypotheses in retroduction, or even the disclosure of new possibilities for thinking and acting.[8] Formal and informal arguments[edit] Informal arguments as studied in informal logic, are presented in ordinary language and are intended for everyday discourse. Conversely, formal arguments are studied in formal logic (historically called symbolic logic, more commonly referred to as mathematical logic today) and are expressed in a formal language. Standard argument types[edit] Deductive arguments[edit] Validity[edit] For example: Soundness[edit]

Deductive Reasoning - The philosophical idea that underpins the style of research in which the investigator begins from a theoretical position and sets out to test it by gathering and analysing data. It is sometimes called the hypothetico-deductive method because, in experimental research, the researcher normally outlines a hypothesis based on the theory, and then uses empirical methods to see whether it is confirmed or not.

Deductive Reasoning - An approach to research where the researcher predicts a relationship between the independent and dependent variables, stating it as a hypothesis. The hypothesis is then tested to see if it is true or false. Comes under the logic of reasoning.