Why and How Do We Help? Amy Cuddy: Your body language shapes who you are. Uncertainty and Romantic Attraction. Asch's Conformity. Cognitive bias. Sharpen Your Snap Judgments. Diminish that Data The more info you have, the better, right? 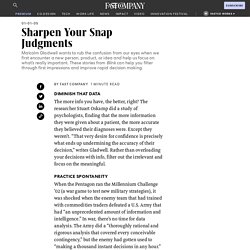 The researcher Stuart Oskamp did a study of psychologists, finding that the more information they were given about a patient, the more accurate they believed their diagnoses were. Except they weren't. "That very desire for confidence is precisely what ends up undermining the accuracy of their decision," writes Gladwell.

Rather than overloading your decisions with info, filter out the irrelevant and focus on the meaningful. Practice Spontaneity When the Pentagon ran the Millennium Challenge '02 (a war game to test new military strategies), it was shocked when the enemy team that had trained with commodities traders defeated a U.S. Check Your Vibes A study found that most doctors sued for malpractice didn't give their patients any lower quality medical information, but on average spent three minutes less with them and spoke in a domineering tone. Thin-Slice It. Cognitive Dissonance. C arkenord and Bullington (1993) suggest a simple exercise that helps students better understand the phenomenon of cognitive dissonance by experiencing it first-hand in class. 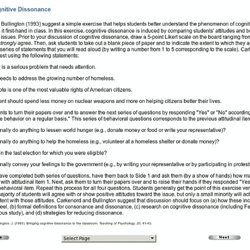 In this exercise, cognitive dissonance is induced by comparing students' attitudes and behaviors on a variety of social issues. Prior to your discussion of cognitive dissonance, draw a 5-point Likert scale on the board ranging from (1) strongly disagree to (5) strongly agree . Then, ask students to take out a blank piece of paper and to indicate the extent to which they agree or disagree with a series of statements that you will read aloud (by writing a number from 1 to 5 corresponding to the scale).

Carkenord and Bullington suggest using the following statements: 1. 2. 3. 4. Then, ask students to turn their papers over and to answer the next series of questions by responding "Yes" or "No" according to whether they "perform the behavior on a regular basis. " Leon Festinger, Henry Riecken, and Stanley Schachter (1956) When Prophecy Fails. Social Psych – G. 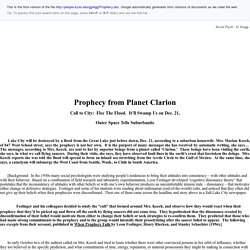 Gregg - 1 Prophecy from Planet Clarion Call to City: Flee The Flood. It’ll Swamp Us on Dec. 21, Outer Space Tells Suburbanite Lake City will be destroyed by a flood from the Great Lake just before dawn, Dec. 21, according to a suburban housewife. [Background: In the 1950s many social psychologists were studying people’s tendencies to bring their attitudes into consistency – with other attitudes and with their behavior. In early October two of the authors called on Mrs. The first contact between a prophet and the source of his revelation is likely to be marked by confusion and astonishment, not to say shock. [Fifteen years earlier she had attended a lecture on theosophy and began reading about the cosmos and occult.] About the same time that she began to receive messages from nonterrestrial sources, Mrs. As she struggled, she gradually became aware that other beings or intelligences were trying to “get through to” her. Mrs. In spite of her growing facility, Mrs. 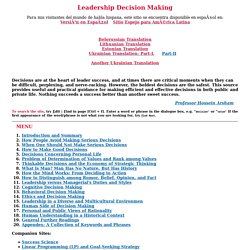 Thirty-five years ago an entrepreneurial leader, Robert Cowan, recognized a new opportunity and asked, "Why do business meetings have to be conducted in person? Why can't they connect through television images? " Immersion: The individual concentrates on the problem and becomes immersed in it. He or she will recall and collect information that seems relevant, dreaming up alternatives without refining or evaluating them.

Incubation: The person keeps the assembled information in mind for: a while. Insight: The problem-conquering solution flashes into the person's mind at an unexpected time, such as on the verge of sleep, during a shower, or while running. Verification and Application: The individual sets out to prove that the creative solution has merit. As with other types of personal development, leadership development requires considerable self-discipline. Inductive reasoning. Inductive Reasoning "Induction is a major kind of reasoning process in which a conclusion is drawn from particular cases. 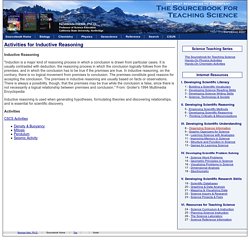 Related:  Amy Cuddy: Your body language shapes who you are   -  Dan Gilbert: Why we make bad decisions   -  Education   -  Enterprise