TV2 Denmark Documentary on HPV Vaccine Shows Lives of Young Women Ruined. Health Impact News Editor Comments TV2 Denmark has done something no mainstream media network in the United States will dare to do: look into the controversial HPV vaccine that many have claimed has ruined the lives of so many young women, and publish an investigative report. 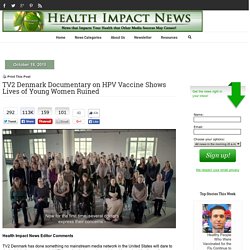 In December of 2013 Katie Couric did a show on the HPV Gardasil Vaccine where she dared to interview the mother of a young woman who died shortly after receiving the vaccine. Couric’s program was hardly pro-vaccine, as she gave both sides of the controversy, with a huge emphasis on the pharmaceutical side claiming the vaccine was safe, but she was viciously attacked by the mainstream media anyway and forced to apologize for even asking questions about the possible risks of the HPV vaccine. With such censorship so obvious in the U.S. mainstream media, it is refreshing to see the Danish media make this documentary available with English subtitles for the rest of the world to watch. Dr. Consider this chart from Denmark: Measles among vaccinated Quebec kids questioned - Health.

An unusual vaccine observation from a large measles outbreak in Quebec may raise some alarm among those who attend the annual meeting of the Infectious Diseases Society of America. 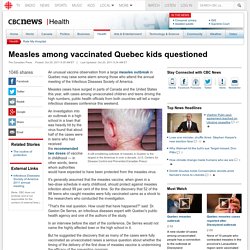 Measles cases have surged in parts of Canada and the United States this year, with cases among unvaccinated children and teens driving the high numbers, public health officials from both countries will tell a major infectious diseases conference this weekend. A still smoldering outbreak of measles in Quebec is the largest in the Americas in over a decade. (U.S. Centers for Disease Control and Prevention/Canadian Press) An investigation into an outbreak in a high school in a town that was heavily hit by the virus found that about half of the cases were in teens who had received the recommended two doses of vaccine in childhood — in other words, teens whom authorities would have expected to have been protected from the measles virus. "That's the real question. Researchers Prove That Measles Is Being Transmitted by the VACCINATED. A remarkable study reveals that a vaccinated individual not only can become infected with measles, but can spread it to others who are also vaccinated against it – doubly disproving two doses of MMR vaccine is “99% effective,” as widely claimed. 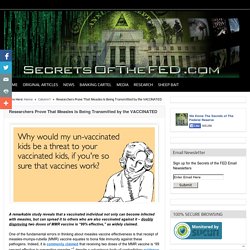 One of the fundamental errors in thinking about measles vaccine effectiveness is that receipt of measles-mumps-rubella (MMR) vaccine equates to bona fide immunity against these pathogens. Indeed, it is commonly claimed that receiving two doses of the MMR vaccine is “99 percent effective in preventing measles,”1 despite a voluminous body of contradictory evidence from epidemiology and clinical experience. This erroneous thinking has led the public, media and government alike to attribute the origin of measles outbreaks, such as the one recently reported at Disney, to the non-vaccinated, even though 18% of the measles cases occurred in those who had been vaccinated against it — hardly the vaccine’s claimed “99% effective.”

Did you follow that? Merck vaccine scientist admits presence of SV40 and AIDS in vaccines - Dr. Maurice Hilleman. Vaccines Did Not Save Us! Two Centuries of Official Statistics. Child Health Safety has compiled an excellent report on data the drug industry do not want you to see. 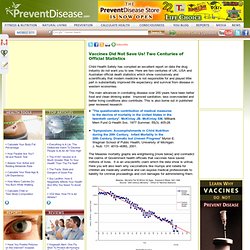 Here are two centuries of UK, USA and Australian official death statistics which show conclusively and scientifically that modern medicine is not responsible for and played little part in substantially improved life expectancy and survival from disease in western economies. The main advances in combating disease over 200 years have been better food and clean drinking water. Improved sanitation, less overcrowded and better living conditions also contribute. This is also borne out in published peer reviewed research: News/pdf/InfectiousDiseaseVaccines.pdf. Vaccine industry exposed for unproven assumptions and misrepresentations of data.

There are no safe vaccines. 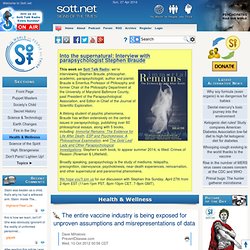 There never was and never will be with the current misrepresented data and unproven assumptions that have spanned over a century in the making. The fact is, every single vaccine is now being exposed for the lack of demonstrated evidence to actually prevent a single case of disease over a placebo. Think it's an exaggeration? Think again.

The reality of two centuries of mortality graphs, and disease declines and vaccine effectiveness vs. dangers is always in stark contradiction to the claims of government health officials. The questionable contributions of vaccines and other medical measures were highlighted with incredible accuracy in 1977 by John and Sonja McKinlay who brilliantly detailed how medical care is generally unrelated to improvements in the health of populations. Not much has changed. So what's different today about our knowledge on vaccines than it was thirty years ago?