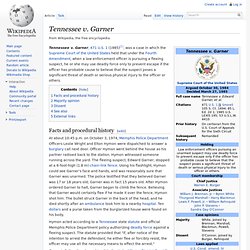 Garner, 471 U.S. 1 (1985)[1], was a case in which the Supreme Court of the United States held that under the Fourth Amendment, when a law enforcement officer is pursuing a fleeing suspect, he or she may use deadly force only to prevent escape if the officer has probable cause to believe that the suspect poses a significant threat of death or serious physical injury to the officer or others. Facts and procedural history[edit] Hymon acted according to a Tennessee state statute and official Memphis Police Department policy authorizing deadly force against a fleeing suspect.

The German Experiment That Placed Foster Children with Pedophiles. Two politicians from the Green Party, which has championed the rights of sexual minorities, accused the AfD of manipulating the victims. 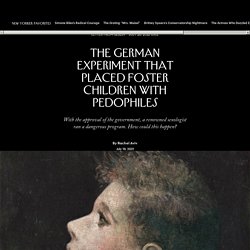 “What the AfD is trying to do, to instrumentalize this crime for its own purposes, is unacceptable,” a representative said. Schweer, the AfD adviser, tried to find a lawyer who could advocate for Marco in a civil lawsuit. “I stand up for a friend, the victim of the so-called Kentler experiment,” he wrote in an e-mail to a large Berlin law firm. Marco had already filed a criminal complaint, but the investigation was limited because Henkel had died in 2015. Timeline of Edward Snowden's revelations. The Irrationality of Giving Up This Much Liberty to Fight Terror - Conor Friedersdorf. When confronted by far deadlier threats, Americans are much less willing to cede freedom and privacy. 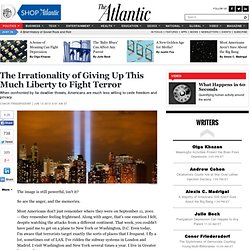 Reuters The image is still powerful, isn't it? So are the anger, and the memories. Most Americans don't just remember where they were on September 11, 2001 -- they remember feeling frightened. Along with anger, that's one emotion I felt, despite watching the attacks from a different continent. But like most people, I've never let fear of terrorism stop me from enjoying life's opportunities and pleasures. As individuals, Americans are generally good at denying al-Qaeda the pleasure of terrorizing us into submission. Of course we should dedicate significant resources and effort to stopping terrorism. U.S. filmmaker repeatedly detained at border. One of the more extreme government abuses of the post-9/11 era targets U.S. citizens re-entering their own country, and it has received far too little attention. 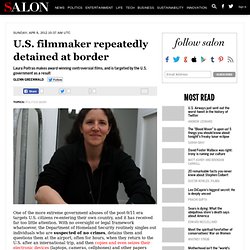 With no oversight or legal framework whatsoever, the Department of Homeland Security routinely singles out individuals who are suspected of no crimes, detains them and questions them at the airport, often for hours, when they return to the U.S. after an international trip, and then copies and even seizes their electronic devices (laptops, cameras, cellphones) and other papers (notebooks, journals, credit card receipts), forever storing their contents in government files. No search warrant is needed for any of this. No oversight exists. And there are no apparent constraints on what the U.S. Government can do with regard to whom it decides to target or why.

PPP_Release_National_ConspiracyTheories_040213. Poll: Nearly 8 in 10 Americans believe in angels. In this photo released by the Basilica of St. 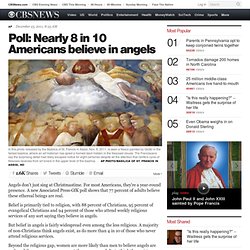 Francis in Assisi, Nov. 8, 2011, is seen a fresco painted by Giotto in the famed basilica, where an art historian has spied a horned devil hidden in the frescoed clouds. The Franciscans say the surprising detail had likely escaped notice for eight centuries despite all the attention that Giotto's cycle of frescoes receives from art lovers in the upper level of the basilica.

AP Photo/Basilica of St. Francis in Assisi, ho Angels don't just sing at Christmastime. Belief is primarily tied to religion, with 88 percent of Christians, 95 percent of evangelical Christians and 94 percent of those who attend weekly religious services of any sort saying they believe in angels. But belief in angels is fairly widespread even among the less religious. Beyond the religious gap, women are more likely than men to believe angels are real, and those over 30 are more apt than younger adults to think they exist.

Media. Money. Prison Industrial Complex. Scranton's Public Workers Now Paid Minimum Wage. The city of Scranton, Pa., sent out paychecks to its employees Friday, like it does every two weeks. 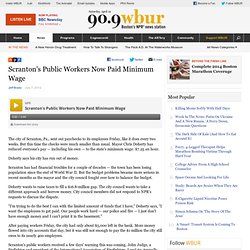 But this time the checks were much smaller than usual. Mayor Chris Doherty has reduced everyone's pay — including his own — to the state's minimum wage: $7.25 an hour. Doherty says his city has run out of money. Scranton has had financial troubles for a couple of decades — the town has been losing population since the end of World War II. But the budget problems became more serious in recent months as the mayor and the city council fought over how to balance the budget.

Doherty wants to raise taxes to fill a $16.8-million gap. "I'm trying to do the best I can with the limited amount of funds that I have," Doherty says, "I want the employees to get paid.