Dan Gilbert on our mistaken expectations 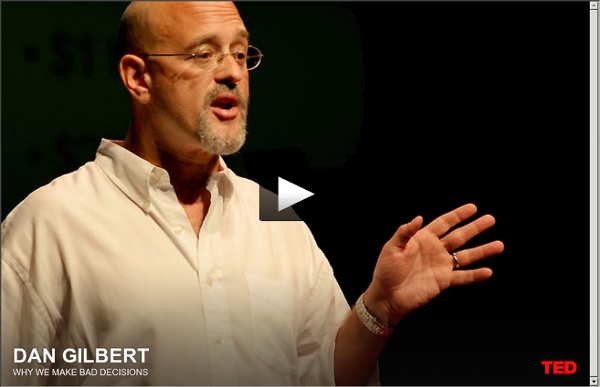 Brain Atlas - Introduction The central nervous system (CNS) consists of the brain and the spinal cord, immersed in the cerebrospinal fluid (CSF). Weighing about 3 pounds (1.4 kilograms), the brain consists of three main structures: the cerebrum, the cerebellum and the brainstem. Cerebrum - divided into two hemispheres (left and right), each consists of four lobes (frontal, parietal, occipital and temporal). The outer layer of the brain is known as the cerebral cortex or the ‘grey matter’.

Expanding the Science and Practice of Gratitude For too long, we’ve taken gratitude for granted. Yes, “thank you” is an essential, everyday part of family dinners, trips to the store, business deals, and political negotiations. That might be why so many people have dismissed gratitude as simple, obvious, and unworthy of serious attention. But that’s starting to change. Recently scientists have begun to chart a course of research aimed at understanding gratitude and the circumstances in which it flourishes or diminishes.

MSNBC - How to Think About the Mind How to Think About the MindNeuroscience shows that the 'soul' is the activity of the brain Sept. 27 issue - Every evening our eyes tell us that the sun sets, while we know that, in fact, the Earth is turning us away from it. Astronomy taught us centuries ago that common sense is not a reliable guide to reality. Today it is neuroscience that is forcing us to readjust our intuitions. People naturally believe in the Ghost in the Machine: that we have bodies made of matter and spirits made of an ethereal something.

The Big Five Personality Test Directions: The following statements concern your perception about yourself in a variety of situations. Your task is to indicate the strength of your agreement with each statement, utilizing a scale in which 1 denotes strong disagreement, 5 denotes strong agreement, and 2, 3, and 4 represent intermediate judgments. In the boxes after each statement, click a number from 1 to 5 from the following scale: Strongly disagreeDisagreeNeither disagree nor agreeAgreeStrongly agree There are no "right" or "wrong" answers, so select the number that most closely reflects you on each statement. Personality Traits List Personality Traits List In the field of psychology, there are five main dimensions of a personality that is used to describe a personality type. These five main dimensions are known as the Big Five factors or Five Factor Model. These main dimensions have been arrived at by empirical, data driven research. Though the initial model was proposed and advanced by Raymon Cristal and Ernest Tupes in 1961, it was only in 1990s that the refined five factor model was advanced by J M Digman.

Scientists discover previously unknown cleaning system in brain A previously unrecognized system that drains waste from the brain at a rapid clip has been discovered by neuroscientists at the University of Rochester Medical Center. The findings were published online August 15 in Science Translational Medicine. The highly organized system acts like a series of pipes that piggyback on the brain's blood vessels, sort of a shadow plumbing system that seems to serve much the same function in the brain as the lymph system does in the rest of the body – to drain away waste products. "Waste clearance is of central importance to every organ, and there have been long-standing questions about how the brain gets rid of its waste," said Maiken Nedergaard, M.D., D.M.Sc., senior author of the paper and co-director of the University's Center for Translational Neuromedicine.

Why genius and madness are connected Many of history's most celebrated creative geniuses were mentally ill, from renowned artists Vincent van Gogh and Frida Kahlo to literary giants Virginia Woolf and Edgar Allan Poe. Today, the fabled connection between genius and madness is no longer merely anecdotal. Mounting research shows these two extremes of the human mind really are linked — and scientists are beginning to understand why. A panel of experts discussed recent and ongoing research on the subject at an event held on May 31 in New York as part of the 5th annual World Science Festival. All three panelists suffer from mental illnesses themselves. 6 Insane Things Science Can Predict About You at Infancy #3. Smaller Babies Do Worse on Exams Getty

List of emotions The contrasting and categorisation of emotions describes how emotions are thought to relate to each other. Various recent proposals of such groupings are described in the following sections. Contrasting basic emotions[edit] FUTURE PSYCHOLOGICAL EVOLUTION DynaPsych Table of Contents Future Psychological Evolution John Stewart jes999@tpg.com.au ABSTRACT: Humans are able to construct mental representations and models of possible interactions with their environment. They can use these mental models to identify actions that will enable them to achieve their adaptive goals.

'Mind reading' brain scans reveal secrets of human vision Courtesy of Fei-Fei Li Researchers were able to determine that study participants were looking at this street scene even when the participants were only looking at the outline. Researchers call it mind reading. One at a time, they show a volunteer – who's resting in an MRI scanner – a series of photos of beaches, city streets, forests, highways, mountains and offices.

Neural balls and strikes: Where categories live in the brain Public release date: 15-Jan-2012 [ Print | E-mail Share ] [ Close Window ] Contact: Robert Mitchumrobert.mitchum@uchospitals.edu 773-484-9890University of Chicago Medical Center Hundreds of times during a baseball game, the home plate umpire must instantaneously categorize a fast-moving pitch as a ball or a strike. In new research from the University of Chicago, scientists have pinpointed an area in the brain where these kinds of visual categories are encoded.