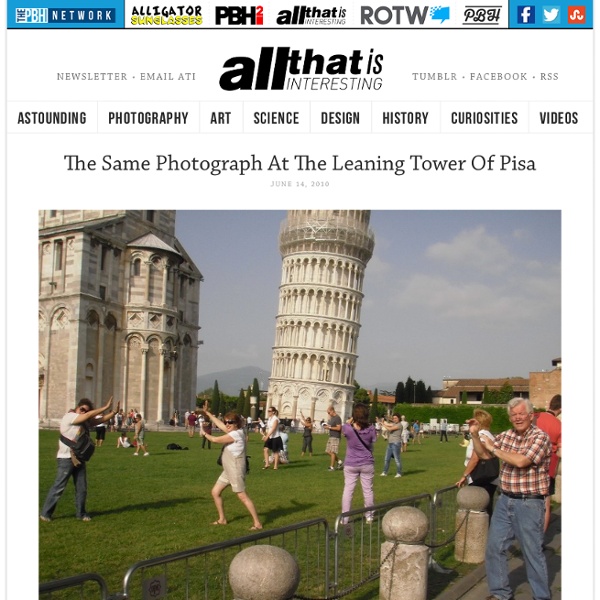 top prank pics ← Previous Post Next Post → This Weeks Top Prank Pics (20 Pics) jon January 10, 2012 48 For More Funny Prank Pics, Click Here. Other Stuff You Might Also Like» The 9 Most Unusual Models On The Planet The Greatest Resignation Letter Of All Time How Dead Rock & Roll Legends Would Look Today The 20 Most Horrifying Sports Faces The Most Awkward Baby Photos Ever Taken How Deaf People Think How Spam Came to Mean Junk Mail How to Remove Stripped Screws Origin of the Words Geek and Nerd 10 Interesting Celebrity Facts 10 Interesting Human Body Facts 8 Interesting Facts About Businesses Quick Facts Rage Comics This Day in History 48 Comments » Awesome Pictures 30 Amazing Conceptual Photographs Photography is always about capturing the meaning, significance and essence of a moment in time, however, conceptual photography takes this idea to the extreme, by capturing a thought, idea, or message to the viewer and communicating it in a clever and interesting method. We’ve gathered up 30 awe-inspiring conceptual photographs that will make you take a moment to look a little bit closer and try to decipher the message of each photograph. If you love these photography roundups, check out our other posts: Thanks! As always, if you enjoy these posts, please help share them with your friends via your favorite social network. Have an inspired day! 1 by Avi Abrams Love by Jorge Gazzanno Black Sheep by Spin360 Kiss by Nicmaos It’s just a Game by Ibrahim AlRabeh Bienvenido al Paraiso by Xabier M. What’s All The Eggcietment About by Ariel Bo Bariel Anorexia by Santy Ago Reborn by A Madestra Suicide Teddy Abduction by Luis da Cuhna Thibaud Cartigny A Creative Mess by highverbalfan 32-P1 by Zephyrance Lou Mr.

TATTOOS Abandoned Six Flags New Orleans Hurricane Katrina killed this clown. According to the photographer, “An abandoned Six Flags amusement park, someone spray painted ‘Six Flags 2012 coming soon’ on the wall above the downed head. But they were clownin.’ Welcome to Zombie Land kids! Chained dreams of fun at Six Flags New Orleans, abandoned Jazzland – that’s what Six Flags opened as “Jazzland” in 2000. Some photographers can see past the lifeless amusement park’s decay and desolation, showing us that there is still a chance the place could be cheery and not cheerless. Like a Bad Dream. Just in case you don’t know the scoop on what Hurricane Katrina did to New Orleans and Six Flags, this photo is of New Orleans, LA, on Sept. 14, 2005. Unlike the bleak amusement-less park above, some photographers can still see and share with us the echo of magic in the abandoned theme park Six Flags – even 6 years later in 2011. Once upon a time, Six Flags was filled with children’s laughter – but now it’s sad, silent, and surreal.

Stunning Self-Portraits Like Valerie Chiang or Kalie Garrett, Alex Stoddard is one of those talented teenage photographers who knows how to express themselves. His self-portraits are all incredibly unique and after viewing them you're left wondering where he's going to take you next. What I enjoy most is that you can almost feel his passion come through. His commitment to not only executing on an idea but doing it well, is apparent to anyone who sees his photos. I got in touch with Alex to ask him a few questions, including how his style evolved while taking on the 365 project. What have you learned from your 365 project? Your photos are all beautifully artistic. I see that you're friends with Rosie Hardy. How has Flickr helped you develop your style? Are there any quotes you live by? Thanks for the interview, Alex. Check out more of Alex's incredible photos on his Flickr page.

A Splash of Color ...from Critique Club... Hi Rackat...ain't I lucky..they assigned your photo to me..ha FIRST IMPRESSION: Horrible shot...what were you thinking???? COMPOSITION: Totally off. It would have worked much better if it were upside down...and reversed horizontaly. TECHNICAL: Focus is toooo sharp. ARTISTIC: Completely boring to look at. OVERALL: I am very disappointed in you, Rackat. Best of luck in the future. Cheers...zadore. ...and now the serious part :) I don't have to repeat what everyone has already mentioned about this photo.