TO UNDERSTAND IS TO PERCEIVE PATTERNS 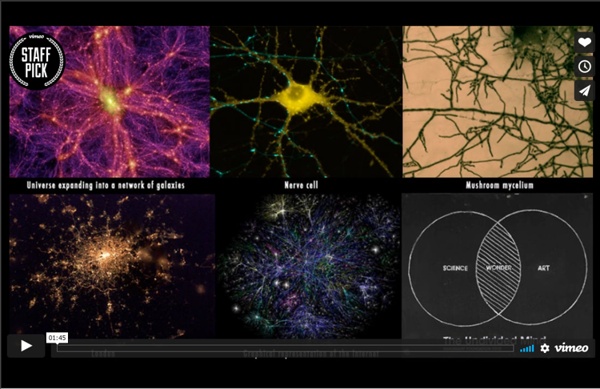 A Glance at the Brain’s Circuit Diagram A new method facilitates the mapping of connections between neurons. The human brain accomplishes its remarkable feats through the interplay of an unimaginable number of neurons that are interconnected in complex networks. A team of scientists from the Max Planck Institute for Dynamics and Self-Organization, the University of Göttingen and the Bernstein Center for Computational Neuroscience Göttingen has now developed a method for decoding neural circuit diagrams. Using measurements of total neuronal activity, they can determine the probability that two neurons are connected with each other. The human brain consists of around 80 billion neurons, none of which lives or functions in isolation.

Macro photos of snowflakes show impossibly perfect designs One of the true wonders of the world are snowflakes, tiny designs made of ice that are so individually unique, so detailed, and so spectacular it's hard to comprehend that they happen naturally and aren't pulled from the depths of our own imaginations. Photographer Alexey Kljatov has a special talent for capturing the brief life of these beautiful ice creations. He features many of his snowflake photos on Flickr. Kljatov says, "I capture snowflakes at open balcony of my house, mostly on glass surface, lighted by LED flashlight from opposite side of glass, and sometimes in natural light, using dark woolen fabrics as background." Here is some of his impressive work: Alexey Kljatov/CC BY-NC 3.0

Your Brain Isn't a Computer — It's a Quantum Field The irrationality of how we think has long plagued psychology. When someone asks us how we are, we usually respond with "fine" or "good." But if someone followed up about a specific event — "How did you feel about the big meeting with your boss today?" — suddenly, we refine our "good" or "fine" responses on a spectrum from awful to excellent.

Who is the Man with the Name that Rhymes? It's been a while since another post. There are many topics that I have cached that I'd like to write on. If it weren't for the troubling aspect of so many things eating at my free time, you'd see more posts on here. I'm not sure there are many readers on here anyway, I've notice the traffic has slowed down to very little these days. Exercise Plus Fasting May Boost Brain's Neurons Forget what you've heard about "brain food"...turns out, the best food for your brain may be none at all. New research on intermittent fasting and exercise show some surprising brain benefits of depriving yourself of calories -- at least occasionally. "We have evidence that exercise and probably intermittent fasting increase the number of mitochondria in neurons," said Mark Mattson, a neuroscientist at the National Institute on Aging in Baltimore. So far, Mattson and other researchers have studied the phenomenon in animals, and are beginning to understand how intermittent fasting in rats and mice can enhance learning and memory, and how it can decrease the risk of those brain functions degenerating.

25 Stunning Photographs Of Sacred Geometry And Fractals In Nature These wonderfully symmetrical plants show the fractal nature of math, physics and the universe. Could this be evidence of sacred geometry? “Look deep into nature, and then you will understand everything better.” -Albert Einstein Time on the Brain: How You Are Always Living In the Past, and Other Quirks of Perception I always knew we humans have a rather tenuous grip on the concept of time, but I never realized quite how tenuous it was until a couple of weeks ago, when I attended a conference on the nature of time organized by the Foundational Questions Institute. This meeting, even more than FQXi’s previous efforts, was a mashup of different disciplines: fundamental physics, philosophy, neuroscience, complexity theory. Crossing academic disciplines may be overrated, as physicist-blogger Sabine Hossenfelder has pointed out, but it sure is fun. Like Sabine, I spend my days thinking about planets, dark matter, black holes—they have become mundane to me. But brains—now there’s something exotic.

Study showing that humans have some psychic powers caps Daryl Bem's career It took eight years and nine experiments with more 1,000 participants, but the results offer evidence that humans have some ability to anticipate the future. "Of the various forms of ESP or psi, as we call it, precognition has always most intrigued me because it's the most magical," said Daryl Bem, professor of psychology emeritus, whose study will be published in the American Psychological Association's Journal of Personality and Social Psychology sometime next year. "It most violates our notion of how the physical world works.

How Thinking Works: 10 Brilliant Cognitive Psychology Studies Everyone Should Know How experts think, the power of framing, the miracle of attention, the weird world of cognitive biases and more… Fifty years ago there was a revolution in psychology which changed the way we think about the mind. The ‘cognitive revolution’ inspired psychologists to start thinking of the mind as a kind of organic computer, rather than as an impenetrable black box which would never be understood.

I want to meet this guy. Can you imagine an evening spent across a hi-top, toasting beers and talking philosophy. I would assume my mind would be blown at nearly every turn of the conversation. I think his videos are outlined but not scripted. People like this make me shake my head in wonder. The ability to spin and twirl logic, what-ifs and emotion. As artist he is as much as anything. by featherking Sep 9

Is this guy seriously unscripted when he does these videos?? Or do they just make it look that way? I love the way he's able to ebb and flow and pause and push with his voice- it's crazy. by megela Sep 7