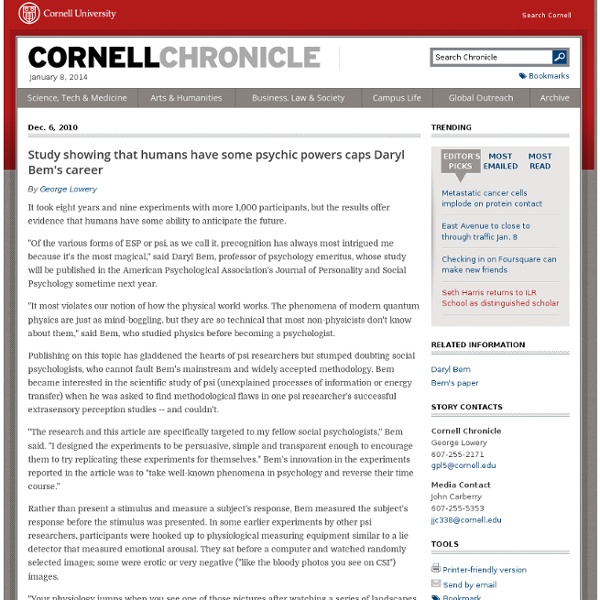 It took eight years and nine experiments with more 1,000 participants, but the results offer evidence that humans have some ability to anticipate the future. "Of the various forms of ESP or psi, as we call it, precognition has always most intrigued me because it's the most magical," said Daryl Bem, professor of psychology emeritus, whose study will be published in the American Psychological Association's Journal of Personality and Social Psychology sometime next year. "It most violates our notion of how the physical world works. The phenomena of modern quantum physics are just as mind-boggling, but they are so technical that most non-physicists don't know about them," said Bem, who studied physics before becoming a psychologist. Publishing on this topic has gladdened the hearts of psi researchers but stumped doubting social psychologists, who cannot fault Bem's mainstream and widely accepted methodology. All but one of the nine experiments confirmed the hypothesis that psi exists.

Science and Nonduality In this article standup philosopher Tim Freke articulates the nature of ‘paralogical’ thinking, which is the foundation of the philosophy and practices he shares to guide people to a ‘deep awake’ state. The need for paralogical thinking arises from an important insight. Life is profoundly paradoxical. I’ve already mentioned in passing the paradox that on the surface of life we live in a world of separate things, but at the depths all is one. At first such spiritual paradoxes can sound like mystical mumbo jumbo.

Do Single Women Seek Attached Men? Researchers have debated for years whether men or women are likelier to engage in “mate poaching.” Some surveys indicated that men had a stronger tendency to go after other people’s partners, but was that just because men were more likely to admit engaging in this behavior? Now there’s experimental evidence that single women are particularly drawn to other people’s partners, according to a report in the Journal of Experimental Social Psychology by two social psychologists, Melissa Burkley and Jessica Parker of Oklahoma State University.

Why Do Some People Learn Faster? The physicist Niels Bohr once defined an expert as “a person who has made all the mistakes that can be made in a very narrow field.” Bohr’s quip summarizes one of the essential lessons of learning, which is that people learn how to get it right by getting it wrong again and again. Education isn’t magic. Our brains are wired so we can better hear ourselves speak, new study shows Like the mute button on the TV remote control, our brains filter out unwanted noise so we can focus on what we’re listening to. But when it comes to following our own speech, a new brain study from the University of California, Berkeley, shows that instead of one homogenous mute button, we have a network of volume settings that can selectively silence and amplify the sounds we make and hear. Activity in the auditory cortex when we speak and listen is amplified in some regions of the brain and muted in others.

How to Trick Your Brain for Happiness This month, we feature videos of a Greater Good presentation by Rick Hanson, the best-selling author and trailblazing psychologist. In this excerpt from his talk, Dr. Hanson explains how we can take advantage of the brain’s natural “plasticity”—it’s ability to change shape over time. gobyg There’s this great line by Ani Tenzin Palmo, an English woman who spent 12 years in a cave in Tibet: “We do not know what a thought is, yet we’re thinking them all the time.” Who is the Man with the Name that Rhymes? It's been a while since another post. There are many topics that I have cached that I'd like to write on. If it weren't for the troubling aspect of so many things eating at my free time, you'd see more posts on here. I'm not sure there are many readers on here anyway, I've notice the traffic has slowed down to very little these days. Partly because Google hasn't been indexing the site correctly which I fixed not too long ago. I'm sure the sporadic updates are another reason.

Jung's Archetypes The Archetypal Patterns The Nature of the Archetypes Dreams and myths are constellations of archetypal images. They are not free compositions by an artist who plans them for artistic or informational effects. Dreams and myths happen to human beings. Synthetic Skin From Spider Silk Heals Wounds Photo by I'll Never Grow Up via Flickr CC Researchers have been looking for better alternatives for providing skin grafts to wounds, and it turns out they need look no further than the animal kingdom. Spider silk is legendary for its strength, as well as its possible healing properties. Tissue engineer Hanna Wendt at Medical School Hannover in Germany honed in on this and found that by creating an artificial skin spun from spider silk, we could have an ideal answer for helping heal wounds. Growing Skin On Spider SilkThe findings were published in the July 26th issue of PLoS ONE.

cognitive psychology - How valid is Lumosity's Brain Performance Index and what normative information is available General thoughts on brain training: Lumosity is a commercial tool that aims to improve brain functioning. In general, I am sceptical of the potential for "brain training programs" to improve cognitive functioning in a generalised way (e.g., see this Nature discussion). Practice is powerful, but tends to be domain specific. Another World (2014) (trailer) ANOTHER WORLD is a feature documentary about the journey of mankind to discover who we truly are, challenging the modern view of the world and reconsidering the world view and value systems of ancient societies such as the indigenous Americans. It is a quest through science and consciousness, individual and planetary, exploring our relationships with ourselves, the world around us and the universe as a whole. It demonstrates how connected we really all are, as best expressed in the Mayan greeting In Lak'ech, which means “I am another yourself.” It also demonstrates just how unnatural the sense of separation that characterizes much of modern thought really is as opposed to the understanding of unity and oneness found in many ancient traditions. Italian director and producer Thomas Torelli (producer of Zero: An Investigation into 9/11) has just finished working on his new feature documentary which is called “Another World” (Un altro mondo), which he wrote and directed.

A Brief History of Stockholm Syndrome Time and again during the 18 harrowing years she allegedly spent in captivity, Jaycee Lee Dugard must have had the chance to cry for help. She assisted her alleged abductor, Phillip Garrido, with his home business, sorting out orders by phone or e-mail. She occasionally greeted customers alone at the door. She even went out in public. But she apparently never made a run for it, returning each day instead to a shed in the backyard of the man who allegedly kidnapped and raped her. "Jaycee has strong feelings with this guy," her stepfather Carl Probyn — who saw... Phase-shift Plasma Turbine Author: Moacir L. Ferreira Jr. 1. Presentation