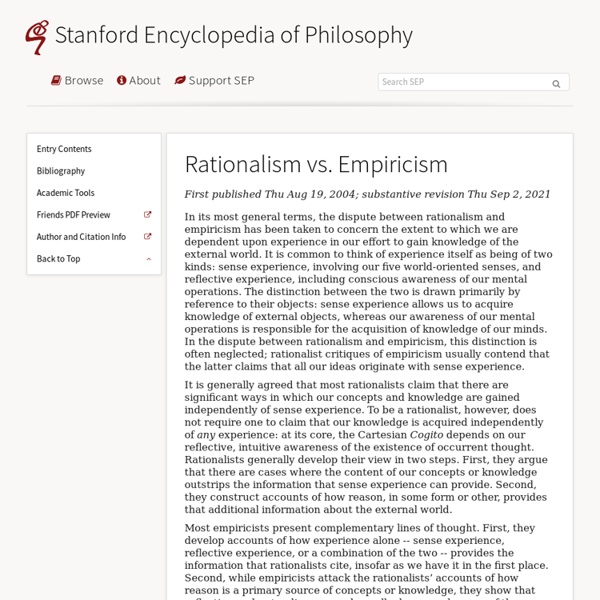 1. Introduction The dispute between rationalism and empiricism takes place within epistemology, the branch of philosophy devoted to studying the nature, sources and limits of knowledge. The defining questions of epistemology include the following. What is the nature of propositional knowledge, knowledge that a particular proposition about the world is true?To know a proposition, we must believe it and it must be true, but something more is required, something that distinguishes knowledge from a lucky guess. The disagreement between rationalists and empiricists primarily concerns the second question, regarding the sources of our concepts and knowledge. 1.1 Rationalism To be a rationalist is to adopt at least one of three claims. The Intuition/Deduction Thesis: Some propositions in a particular subject area, S, are knowable by us by intuition alone; still others are knowable by being deduced from intuited propositions. Intuition is a form of rational insight. 1.2 Empiricism 2. 3. 4.

Aristotle & Science Aristotle was born in Stagira in north Greece, the son of Nichomachus, the court physician to the Macedonian royal family. He was trained first in medicine, and then in 367 he was sent to Athens to study philosophy with Plato. He stayed at Plato's Academy until about 347 -- the picture at the top of this page, taken from Raphael's fresco The School of Athens, shows Aristotle and Plato (Aristotle is on the. right). Though a brilliant pupil, Aristotle opposed some of Plato's teachings, and when Plato died, Aristotle was not appointed head of the Academy. Sense Perception, use in cinematography "How do we make sense of the complex visual world around us?" That opening question served as the launching pad for an unprecedented two-night Academy event, "Movies in Your Brain: The Science of Cinematic Perception," which brought together filmmakers and cognitive scientists to explore the way viewers process images, events and stories experienced on the silver screen. Bill Kroyer, an Academy Governor representing the Short Films and Feature Animation Branch, welcomed the audience at both evenings of the Sci-Tech Council event, held on July 29 and 30 at the Academy's Linwood Dunn Theater. The host throughout was Tim J.

Pragmatic ethics Pragmatic ethics was discussed by John Dewey (pictured) Pragmatic ethics is a theory of normative philosophical ethics. Ethical pragmatists, such as John Dewey, believe that some societies have progressed morally in much the way they have attained progress in science. Logic in Argumentative Writing Summary: This resource covers using logic within writing—logical vocabulary, logical fallacies, and other types of logos-based reasoning. Contributors:Ryan Weber, Allen BrizeeLast Edited: 2013-03-11 10:08:50 Fallacies are common errors in reasoning that will undermine the logic of your argument.

Karl Marx 1. Marx's Life and Works Karl Marx was born in Trier, in the German Rhineland, in 1818. A Priori versus Empirical Reasoning "In times of change learners inherit the earth; while the learned find themselves beautifully equipped to deal with a world that no longer exists." Eric Hoffer A Priori: from Latin, literally "from the former." Reasoning that starts from accepted first principles or facts requiring no proof or foundation, being a self-evident assumption to the true believer Empirical:

Pareidolia: Why we see faces in hills, the Moon and toasties People have long seen faces in the Moon, in oddly-shaped vegetables and even burnt toast, but a Berlin-based group is scouring the planet via satellite imagery for human-like features. What's behind our desire to see faces in our surroundings, asks Lauren Everitt. Most people have never heard of pareidolia. But nearly everyone has experienced it. Anyone who has looked at the Moon and spotted two eyes, a nose and a mouth has felt the pull of pareidolia. It's "the imagined perception of a pattern or meaning where it does not actually exist", according to the World English Dictionary.

Postmodernism 1. Precursors The philosophical modernism at issue in postmodernism begins with Kant's “Copernican revolution,” that is, his assumption that we cannot know things in themselves and that objects of knowledge must conform to our faculties of representation (Kant 1787). A priori The term a priori is used in philosophy to indicate deductive reasoning. The term is Latin, meaning “from what comes before”, refering to that which comes before experience. Something that is known a priori can safely be considered to be a true statement, assuming that the logic (or deductive reasoning) used to arrive at that conclusion is conducted using valid arguments.

Diners believe a meal is tastier the more they have paid for it, say researchers - News - Food + Drink People who eat expensive food perceive it to be tastier than the same meal offered at a lower price, the Cornell University study found. The researchers concluded that taste perception and feelings of overeating and guilt can be manipulated by price alone. The New York University study examined the eating habits of 139 people enjoying an Italian buffet in an upstate restaurant. The price of the food was set by the researchers at either $4 (£2.40) or $8 (£4.70) for the all-you-can-eat meal. The people who paid $8 for the food enjoyed their meal 11 per cent more than those who ate the “cheaper” buffet, although both ate the same amount of food. Participants, who ate from the lesser priced buffet, did not enjoy their meal as much and reported frequent feelings of overeating and guilt about loading up their plates.

Philosophy and the Hippy Dream - Hippyland Hippies from A to Zby Skip Stone Hippy Philosophy and the Hippy Dream We are stardust, we are golden, and we've got to get ourselves back to the garden. Joni Mitchell/CS&N (Woodstock) Kant, Immanuel: Metaphysics [Internet Encyclopedia of Philosophy] Immanuel Kant (1724-1804) is one of the most influential philosophers in the history of Western philosophy. His contributions to metaphysics, epistemology, ethics, and aesthetics have had a profound impact on almost every philosophical movement that followed him. This article focuses on his metaphysics and epistemology in one of his most important works, The Critique of Pure Reason. A large part of Kant’s work addresses the question “What can we know?” The answer, if it can be stated simply, is that our knowledge is constrained to mathematics and the science of the natural, empirical world.

That picture of the map of different tastes on your tongue is completely wrong, say scientists - Science - News Researchers at Columbia University in the US, found that every one of the thousands of sensors on the tongue can sense the full range of sweet, salty, bitter, sour, and umami (the savoury taste of glutamate). Taste buds each have 50 to 100 receptors attuned to each category, which have a matching partner in the brain that receives signals. Prof Charles Zuker, a lead author of the study, told BBC News: “The cells were beautifully tuned to discrete individual taste qualities, so you have a very nice match between the nature of the cells in your tongue and the quality they represent [in the brain].” Scientists hope that the findings, published in Nature, could be used to help reverse the loss of taste sensation in old age. The human tongue is popularly thought to have distinct zones for discerning sweet, bitter, sour, salty and savoury tastes, with the so-called “tongue map”, often seen in primary school textbooks.