6 hostage negotiation techniques that will get you what you want 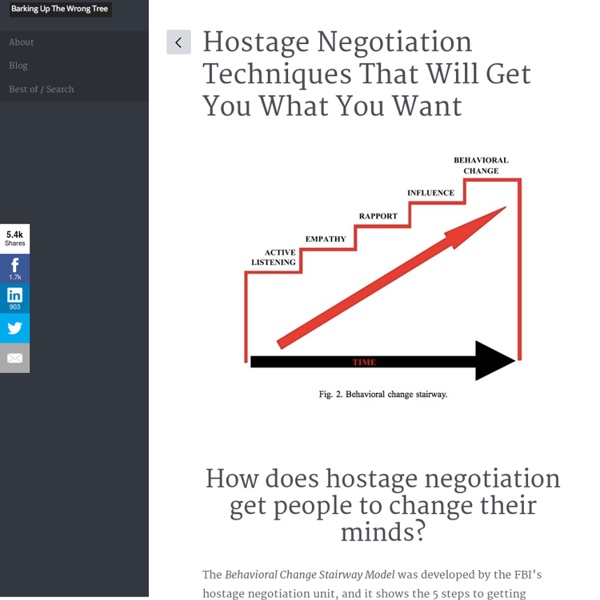 How does hostage negotiation get people to change their minds? The Behavioral Change Stairway Model was developed by the FBI’s hostage negotiation unit, and it shows the 5 steps to getting someone else to see your point of view and change what they’re doing. It’s not something that only works with barricaded criminals wielding assault rifles — it applies to most any form of disagreement. There are five steps: Active Listening: Listen to their side and make them aware you’re listening.Empathy: You get an understanding of where they’re coming from and how they feel.Rapport: Empathy is what you feel. Rapport is when they feel it back. The problem is, you’re probably screwing it up. What you’re doing wrong In all likelihood you usually skip the first three steps. And that never works. Saying “Here’s why I’m right and you’re wrong” might be effective if people were fundamentally rational. But they’re not. From my interview with former head of FBI international hostage negotiation, Chris Voss: 1. 2.

Yes! 50 Scientifically Proven Ways to Be Persuasive Noah Goldstein’s, Steve Martin’s (no, not that Steve Martin‘s) and Robert Cialdini’s Yes! 50 Scientifically Proven Ways to Be Persuasive is a pop psych book, where a bunch of research in psychology is distilled into one readable volume. 50 scientifically proven ways constitute 50 chapters of the book, longest of which take 7 pages. The authors take the position that persuasion is a science, not art, hence with the right approach anybody can become the master in the skill of persuasion.

Robert Cialdini explains the six ways to influence people - Interview: Dr. Robert Cialdini Dr. Robert Cialdini is the authority on the study of persuasion. His classic book, “Influence” has sold millions of copies and is widely regarded as the go-to text on the subject. What makes the book so special is it’s not just a collection of academic studies on college students.

How To Stop Being Lazy And Get More Done - 5 Expert Tips Before we commence with the festivities, I wanted to thank everyone for helping my first book become a Wall Street Journal bestseller. To check it out, click here. Some days the to-do list seems bottomless. Just looking at it is exhausting. We all want to know how to stop being lazy and get more done. Negotiation Skills Introduction: Management function techniques will never be complete without the manager and even various other employees being able to negotiate effectively. Any organization runs well based on the skills of their employees. From communication skills to negotiation skills, every organization would need to hone these skills in their workers to ensure the efficient running of a business organization. You need to understand that these negotiation skills are not very difficult to grasp and will only take time and some careful moves with the other party for you to be able to close a good deal, thereby increasing employee productivity to a great extent.

Tough Choices: The Science Behind Making The Right Call Our lives are filled with one decision after another. Many are trivial but every now and then, a biggie comes along, one where you just know that you’re about to irreversibly shape your own future. The bad news is our decision-making is hampered by the fog of human irrationality. Neuroscientists Discover Daily Meditation Reduces Pain By 40-57% (Double The Relief Of Morphine) A new study being published tomorrow (April 6, 2011) in the Journal of Neuroscience proves that meditation has profound pain-relieving effects in the brain. “This is the first study to show that only a little over an hour of meditation training can dramatically reduce both the experience of pain and pain-related brain activation,” said Fadel Zeidan, Ph.D., lead author of the study and post-doctoral research fellow at Wake Forest Baptist Medical Center. “We found a big effect – about a 40 percent reduction in pain intensity and a 57 percent reduction in pain unpleasantness.

Cialdini's Six Principles of Influence - Communication Skills Training from MindTools Convincing Others to Say "Yes" (Also known as the Six Weapons of Influence) How do you influence others? © iStockphoto/blackred You've come up with a fantastic idea for a new product. Now you need to convince everyone to support it. Study a person character using his/her body Language in almost any situation Here are some great techniques to Read Body Language to Reveal the Underlying Truth in Almost Any Situation. You've likely heard that body language accounts for up to 55% of how we communicate, but reading non-verbal cues isn't just about broad strokes. The same gesture can indicate a number of different things depending on context. In this post, we're going to take a look at three common situations in which non-verbal cues are especially important—detecting lies, going on a date, and interviewing for a job—then explain how to interpret body language more accurately so that you can read between the lines when a person's words aren't necessarily conveying the way that they honestly feel. We lie a lot. When having a conversation with a stranger, chances are we'll lie in the first ten minutes.

Growing Up Poor Changes Brain Connectivity and Depression Risk The US federal poverty level for a family of four is $24,250 a year. Key brain structures show weaker connections in poor children, a new study finds. Brain scans of 105 children aged between 7 and 12 showed weaker connections in the hippocampus and amygdala, among other differences. How to get what you want: top negotiators on the tricks of their trade The divorce lawyer Ayesha Vardag won the landmark ruling in 2010 that German heiress Katrin Radmacher’s prenuptial agreement was legally binding, protecting her £106m fortune. She also recently won the right for Pauline Chai, wife of Laura Ashley tycoon Khoo Kay Peng, to have her divorce case heard in the UK, paving the way for what could be one of the biggest divorce payouts in history.Growing up, it was just my mother and me. She was busy and stressed, so from an early age I took on responsibilities. Later, I would always be the one in the group to sort out difficult situations, either by being stroppy and making a fuss, or by brokering a deal. As a student at Cambridge, I successfully took up the cause to get mixed bedsit sharing for students at Queens’ College.

Six Habits of Highly Empathic People If you think you’re hearing the word “empathy” everywhere, you’re right. It’s now on the lips of scientists and business leaders, education experts and political activists. But there is a vital question that few people ask: How can I expand my own empathic potential? Empathy is not just a way to extend the boundaries of your moral universe. Musician Plays Sax During Brain Tumor Surgery - NBC News The staff in the operating room burst into applause as Dan Fabbio tooted out a melody on his saxophone. It may not have been his best performance but the notes were, to make a deliberate pun, music to the ears of Dr. Webster Pilcher, the neurosurgeon who had just been peeling away layers of Fabbio’s brain. “He played it really flawlessly.

Jedi Mind Tricks: 17 Lesser Known Ways to Persuade People Want to know how to persuade people online and get what you want? The power of influence is usually all that separates the successful from everyone else. These are some tactics, discovered through psychological research, that you have probably not yet heard about, but have the potential to increase your persuasive abilities. I’m not going to cover reciprocity, scarcity or social proof and all those widely known persuasion principles. You already know all about those (in case you don’t, stop everything and read this book by Cialdini). Related: How Nike’s Making Persuasive Product Pages