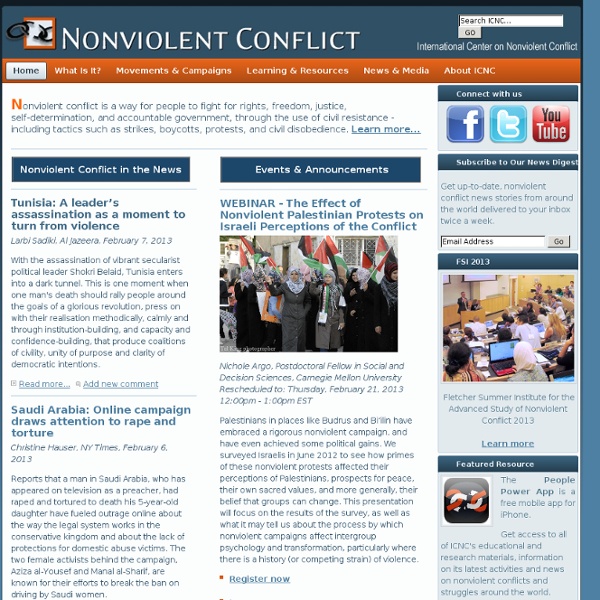 Listen Project Bringing Down A Dictator Bringing Down A Dictator is a 56-minute documentary film by Steve York about the nonviolent defeat of Serbian leader Slobodan Milosevic. It focuses on the contributions of the student-led Otpor movement. The film originally aired on national PBS in March 2002. Other awards include: Bringing Down A Dictator was broadcast several times in the former Republic of Georgia in the fall of 2003 and was credited with helping the citizens there organize their nonviolent protest[2] against the electoral fraud linked to Eduard Shevardnadze, in what was called the Rose Revolution.[3] In a February 9, 2011 news piece on the Al-Jazeera-English channel, members of the youth leaders of the Egyptian Revolution of 2011 are seen watching Bringing Down A Dictator during an organizational meeting.[4] Screenings[edit] References[edit] Reviews[edit] The New York Times, March 30, 2002 Peace Magazine Articles/Interviews[edit]

The Urban EpiCenter - About Us The Center for Nonviolent Communication | Center for Nonviolent Communication Crisis-hit Baltic states mark 20th anniversary of human chain | Europe | Deutsche Welle | 22.08.2009 Their hands stretching across forests and fields, standing along highways and country roads, as many as 2 million Estonians, Latvians and Lithuanians joined in a 671-kilometer (417-mile) human chain 20 years ago, looking forward to a better future. But this year's celebration of the Baltic Way, which showed the world the Baltic countries' desire for autonomy apart from the Soviet Union, is looking backward in an attempt to recapture that hope in difficult economic times. The commemorations include exhibits and academic conferences, but the most hailed event is Heartbeats for the Baltics, a relay run along the Baltic Way route. About 13,500 people will run in one-kilometer stretches, but organizers say anyone can join the relay along the way for any length. The first runners left the Estonian capital, Tallinn, for the Latvian capital of Riga on Saturday morning. Demonstrators along the 1989 Baltic Way The end of Communism Putting on the running shoes Fresh courage needed

The Singing Revolution The Singing Revolution is a documentary film created by James Tusty and Maureen Castle Tusty[1] about the nonviolent Singing Revolution in Estonia in which hundreds of thousands of Estonians gathered publicly between 1986 and 1991, in an effort to end decades of Soviet occupation. The revolutionary songs they created anchored Estonia’s non-violent struggle for freedom.[2] Purpose[edit] Drawn by James' Estonian heritage, filmmakers James and Maureen Tusty traveled to Estonia in 1999 to teach filmmaking courses. Film content[edit] Historical background[edit] The power of a peaceful resistance[edit] Between 1986 and 1991, while there was violent turmoil and struggle for independence from the Soviet Union in the other Baltic states, Estonians courageously and peacefully demanded that the Soviets recognize their country’s right to statehood and self-governance. Reception[edit] References[edit] External links[edit]