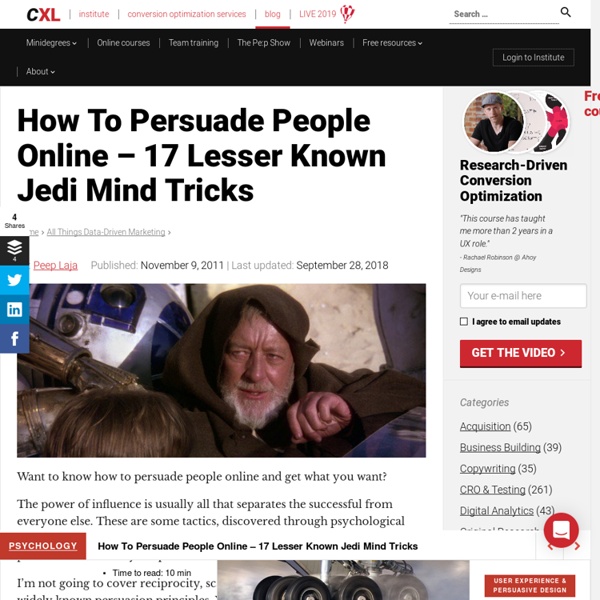 Want to know how to persuade people online and get what you want? The power of influence is usually all that separates the successful from everyone else. These are some tactics, discovered through psychological research, that you have probably not yet heard about, but have the potential to increase your persuasive abilities. I’m not going to cover reciprocity, scarcity or social proof and all those widely known persuasion principles. You already know all about those (in case you don’t, stop everything and read this book by Cialdini). Related: How Nike’s Making Persuasive Product Pages 1. The best way to persuade audiences that are not inclined to agree with you, is to talk fast. Want to boost persuasive power? Don Moore from Carnegie Mellon’s Center for Behavioral Decision Research has published research showing that confidence even trumps past accuracy in earning the trust of others. People naturally associate confidence with expertise. 2. Light swearing, that is. Image credit 3. 4. 5. 6.

The making of an action hero body - Entertainment - Movies When I was hired to train an actor for an action film, the studio executives would express how important it was to transform their body so they looked like an action hero. That's why I made the decision to utilize the same method of dieting and training I used to win many of my champion body building competitions. Matt Damon and Kevin Spacey were extremely excited to work with me, which made my job a lot easier than it had been with some of my other celebrity clients. I have the actors do weight training in the morning and cardio at night. WEIGHT TRAINING SESSION(* — increase weight each set) Monday – Abs/Biceps/Triceps Abdominal Crunches - 3x50 Hanging Leg Raises – 3x30 Hyper Extensions – 3x25 Seated Dumbbell Curls – 3x15/12/10 * Standing Barbell Curls – 3x15/12/10 * Standing Cable Curls – 3x15/12/10 * Tricep Cable Pushdowns – 3x15/12/10 * Lying Barbell Tricep Extensions – 3x15/12/10 * Dumbbell Kickbacks – 3x15/12/10 * Wednesday – Rest Day

10 of the world's biggest unsolved mysteries: Voynich Manuscript Voynich Manuscript Named after the Polish-American antiquarian bookseller Wilfrid M. Voynich, who acquired it in 1912, the Voynich Manuscript is a detailed 240-page book written in a language or script that is completely unknown. Its pages are also filled with colorful drawings of strange diagrams, odd events and plants that do not seem to match any known species, adding to the intrigue of the document and the difficulty of deciphering it. The original author of the manuscript remains unknown, but carbon dating has revealed that its pages were made sometime between 1404 and 1438. Theories abound about the origin and nature of the manuscript. One thing most theorists agree on is that the book is unlikely to be a hoax, given the amount of time, money and detail that would have been required to make it.

40 Photo-Illustrated Questions to Refocus Your Mind Asking the right questions is the answer… It’s not the answers you get from others that will help you, but the questions you ask of yourself. Here are 40 thought-provoking questions to help you refresh and refocus your thinking: Please share your thoughts with us in the comments section below. if you’re interested in reading even more inspiring, thought-provoking questions.Title photo by: Helga Weber For all other photo credits please refer to ThoughtQuestions.com Related 40 Questions Everyone is Afraid to Ask Judge a man by his questions rather than his answers. April 13, 2012 In "Aspirations" 40 Questions that Will Quiet Your Mind Judge a person by their questions, rather than their answers … because asking the right questions is the answer. August 5, 2015 In "Happiness" 25 Photo-Illustrated Reminders to Help You Find Happiness Happiness is the highest level of success.

a bit about sarah wilson Sarah Wilson is an author, tv host, blogger and wellness coach whose journalism career has spanned 20 years across television, radio, magazines, newspapers and online. She’s the former editor of Cosmopolitan magazine and was the host of the first series of MasterChef Australia, the highest rating show in Australian TV history. She appears regularly as a commentator on a range of programs including Channel 7′s Sunday Night, The Morning Show, Sunrise and Weekend Sunrise, Ten Network’s Good News Week and The Project, Nine’s 60 Minutes and A Current Affair. Sarah is an adept social commentator, following a career that’s spanned politics, health advocacy, restaurant reviewing, opinion writing and trend forecasting. She’s also a qualified Health Coach with the Institute for Integrative Nutrition in New York. Sarah’s 8-Week Program has seen over 280 000 people quit sugar. Sarah is the author of the Australian best-seller I Quit Sugar, due for release in the UK and the USA early 2014. Television

Best 101 Entrepreneurship Quotes Ever · 14 Clicks I’m a big fan of quotes. I could read them all day long. Some quotes can shift your entire mindset on something while others are just nice to bring up in conversations. I’ve spent the last two years (off and on) compiling 101 of my favorite entrepreneurship quotes around success, failure, leadership, wisdom, humor, money, practicality, motivation, and a smattering of entrepreneurial proverbs. Success Quotes Failure Quotes “Failure defeats losers, failure inspires winners.” Leadership Quotes “Leaders don’t force people to follow, they invite them on a journey.” Wisdom Quotes “The whole problem with the world is that fools and fanatics are always so certain of themselves, but wiser people so full of doubts.” Humorous Quotes “I think it’s wrong that only one company makes the game Monopoly.” Money Quotes “Formal education will make you a living. Practical Quotes

The Dalai Lama's 18 Rules For Living - StumbleUpon May 6, 2011 | 42 Comments » | Topics: Life, List At the start of the new millennium the Dalai Lama apparently issued eighteen rules for living. Since word travels slowly in the digital age these have only just reached me. Here they are. Take into account that great love and great achievements involve great risk. When you lose, don’t lose the lesson. via OwenKelly Hot Stories From Around The Web Other Awesome Stories Drive: The Surprising Truth About What Motivates Us July 22, 2011 by Akira Hirai Daniel Pink’s book, Drive, explores some misconceptions about what drives human behaviors. For example, one commonly held belief is that if you provide larger monetary incentives, people will perform better. This turns out to be true for simple, mechanical tasks, but false when applied to complex tasks that require conceptual reasoning. For the latter, better outcomes are achieved by providing autonomy, providing people with the opportunity to master the subject matter, and creating a sense of purpose. This brilliantly animated video summarizes some of Dan’s thinking. Other articles by Akira Hirai. Filed under: Economics, Strategy About Cayenne Consulting.