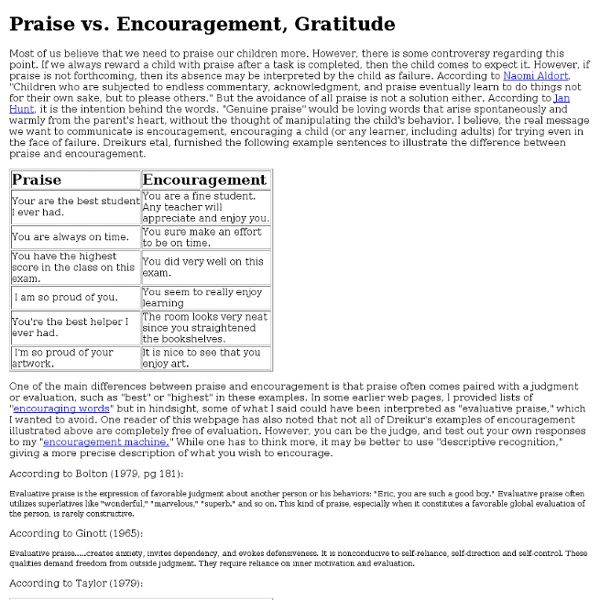 Most of us believe that we need to praise our children more. However, there is some controversy regarding this point. If we always reward a child with praise after a task is completed, then the child comes to expect it. However, if praise is not forthcoming, then its absence may be interpreted by the child as failure. According to Naomi Aldort, "Children who are subjected to endless commentary, acknowledgment, and praise eventually learn to do things not for their own sake, but to please others." But the avoidance of all praise is not a solution either. One of the main differences between praise and encouragement is that praise often comes paired with a judgment or evaluation, such as "best" or "highest" in these examples. According to Bolton (1979, pg 181): Evaluative praise is the expression of favorable judgment about another person or his behaviors: "Eric, you are such a good boy." According to Ginott (1965): According to Taylor (1979): "Mr. "Bravo! "Splendid! Sam: It's scary. Mr. Mr. Related:  New Learning Skills

How being called smart can actually make you stupid | Neurobonkers A few months ago I posted a piece which has become my most popular blog post by quite a landslide. The post covered various techniques for learning and looked at the empirical evidence for and against their efficacy based on recent research. This post is my follow up, in which I look at the case for one tip for learning that it seems really could have a big impact. A growing body of evidence from the last two decades suggests that our attitude towards our own potential for intelligence has a considerable impact on our lives, furthermore we are incredibly vulnerable to having this attitude or "mindset" moulded for better or worse, by how people praise us in a way that is both shocking and problematic. Stanford psychology professor Carol Dweck has presented a range of startlingly fascinating findings on the topic which have been broadly supported by further research. References: Blackwell L.S., Trzesniewski K.H. & Dweck C.S. (2007). Kamins M.L. & Dweck C.S. (1999).

How 30 Minutes a Day Can Increase Your Intelligence If you ask me, where humans go wrong is with their lack of patience. That, and their recent acquired taste for instant gratification. The reality is that things take time. That said, it’s actually pretty easy to improve yourself. Because most people don’t bother. The majority of people don’t do a single thing to improve themselves. So I’ve come up with a new theory: The Half Hour Theory. I love it because it’s actually pretty easy to integrate into your life. This could take the form of half an hour’s reading every day. You may even want to improve the speed of your reading so you can learn faster. This theory could even rely on you taking a half an hour every day spending time on the Internet, researching into something that really interests you. The point is that by dedicating a small amount of time every day to something that will expand your intelligence or improve your life in some way, you will (after a while) notice a large result. Here’s how to implement The Half Hour Theory:

The Power of Process: What Young Mozart Teaches Us About the Secret of Cultivating Genius by Maria Popova On the “powerful blend of instruction, encouragement, and constant practice.” “The trick to creativity … is to identify your own peculiar talent and then to settle down to work with it for a good long time,” observed Denise Shekerjian in reflecting on her insightful interviews with MacArthur “genius” grantees. “Success is the product of the severest kind of mental and physical application,” attested Thomas Edison. “It is the man who carefully advances step by step, with his mind becoming wider and wider … who is bound to succeed in the greatest degree,” Alexander Graham Bell proclaimed. And yet our culture continues to perpetuate the notion that genius is a “God”-given blessing. Anonymous portrait of the child Mozart, possibly by Pietro Antonio Lorenzoni; painted in 1763 on commission from Leopold Mozart (public domain) Wolfgang Amadeus Mozart [was] alleged to be an instant master performer at age three and a brilliant composer at age five. Donating = Loving Share on Tumblr

How The Memory Works In Learning How The Memory Works In Learning By Dr. Judy Willis, M.D., M.Ed. Teachers are the caretakers of the development of students’ highest brain during the years of its most extensive changes. As such, they have the privilege and opportunity to influence the quality and quantity of neuronal and connective pathways so all children leave school with their brains optimized for future success. This introduction to the basics of the neuroscience of learning includes information that should be included in all teacher education programs. Teaching Grows Brain Cells IQ is not fixed at birth and brain development and intelligence are “plastic” in that internal and environmental stimuli constantly change the structure and function of neurons and their connections. It was once believed that brain cell growth stops after age twenty. High Stress Restricts Brain Processing to the Survival State Memory is Constructed and Stored by Patterning Memory is Sustained by Use The Future References Ashby, C.

Formula for success in learning If you have found this place in the vast cyberspace of the web, you are probably not the one to convince that knowledge is power, and that solutions to most problems facing humanity could be found if we were armed with more understanding of how the world works. While knowledge is power, information can be overpowering. An increasing proportion of the population suffers from Information Fatigue Syndrome, i.e. from stress related to being overwhelmed with an unmanageable glut of information. This text introduces you to simple steps toward managing information and toward rock-solid knowledge. No cheap miracles. I have been working on the problem of effective learning for 16 years now since, as a student of molecular biology, I first understood how I could greatly change the quality of all my actions were I able to improve the recall of what I studied for exams (and not only). You may find the first three points obvious. This is the shortest path to empowering knowledge: Further reading

Secrets of the Creative Brain As a psychiatrist and neuroscientist who studies creativity, I’ve had the pleasure of working with many gifted and high-profile subjects over the years, but Kurt Vonnegut—dear, funny, eccentric, lovable, tormented Kurt Vonnegut—will always be one of my favorites. Kurt was a faculty member at the Iowa Writers’ Workshop in the 1960s, and participated in the first big study I did as a member of the university’s psychiatry department. I was examining the anecdotal link between creativity and mental illness, and Kurt was an excellent case study. He was intermittently depressed, but that was only the beginning. His mother had suffered from depression and committed suicide on Mother’s Day, when Kurt was 21 and home on military leave during World War II. His son, Mark, was originally diagnosed with schizophrenia but may actually have bipolar disorder. While mental illness clearly runs in the Vonnegut family, so, I found, does creativity. “Doing good science is … like having good sex.

How your brain likes to be treated at revision time If you're a student, you rely on one brain function above all others: memory. These days, we understand more about the structure of memory than we ever have before, so we can find the best techniques for training your brain to hang on to as much information as possible. The process depends on the brain's neuroplasticity, its ability to reorganise itself throughout your life by breaking and forming new connections between its billions of cells. How does it work? Information is transmitted by brain cells called neurons. Your hippocampus is forced to store many new patterns every day. So what's the best way to revise? Forget about initial letters Teachers often urge students to make up mnemonics – sentences based on the initial letters of items you're trying to remember. The mnemonic is providing you with a cue but, if you haven't memorised the names, the information you want to recall is not there. Repeat yourself Pathways between neurons can be strengthened over time. Take regular breaks

The Science of “Chunking,” Working Memory, and How Pattern Recognition Fuels Creativity by Maria Popova “Generating interesting connections between disparate subjects is what makes art so fascinating to create and to view… We are forced to contemplate a new, higher pattern that binds lower ones together.” It seems to be the season for fascinating meditations on consciousness, exploring such questions as what happens while we sleep, how complex cognition evolved, and why the world exists. Joining them and prior explorations of what it means to be human is The Ravenous Brain: How the New Science of Consciousness Explains Our Insatiable Search for Meaning (public library) by Cambridge neuroscientist Daniel Bor in which, among other things, he sheds light on how our species’ penchant for pattern-recognition is essential to consciousness and our entire experience of life. To illustrate the power of chunking, Bor gives an astounding example of how one man was able to use this mental mechanism in greatly expanding the capacity of his working memory. Donating = Loving Share on Tumblr

10 Paradoxical Traits Of Creative People Editor's Note: This is one of the most-read leadership articles of 2013. Click here to see the full list. I frequently find myself thinking about whether I am an artist or an entrepreneur. I am simply trying my best to create my own unique path. It is safe to say that more and more entrepreneurs are artists, and artists of all kinds are entrepreneurs. And the trend is only on the rise as all things (art, science, technology, business, culture, spirituality) are increasingly converging. Creativity is the common theme that drives both entrepreneurs and artists alike. Over this past Labor Day weekend, I found myself reading excerpts from distinguished professor of psychology and management Mihaly Csikszentmihalyi’s (pronounced me-HIGH chick-sent-me-HIGH-ee) seminal book Creativity: The Work and Lives of 91 Eminent People (HarperCollins, 1996). He writes: Mihaly describes ten traits often contradictory in nature, that are frequently present in creative people. 1. 2. 3. 5. 6. 7. 8. 10.

What schools need: Vigor instead of rigor - The Answer Sheet This was written by Joanne Yatvin, a vet­eran public school educator, author and past president of the National Council of Teachers of English. She is now teaching part-time at Portland State University. A version of this was originally published in the Atlanta Journal Constitution. By Joanne Yatvin Though my years in the classroom are long past, at heart I am still a cranky old English teacher who bristles at some of the neologisms that have crept into public language. Even so, I remain politely quiet when others commit such grammatical transgressions. Part of my reaction is emotional, having so often heard “rigor” paired with “mortis.” Now, more than ever, “rigor” is being used to promote the idea that American students need advanced course work, complex texts, stricter grading, and longer school days and years in order to be ready for college or the workplace. Since I believe it is time for a better word and a better concept to drive American education, I recommend “vigor.”