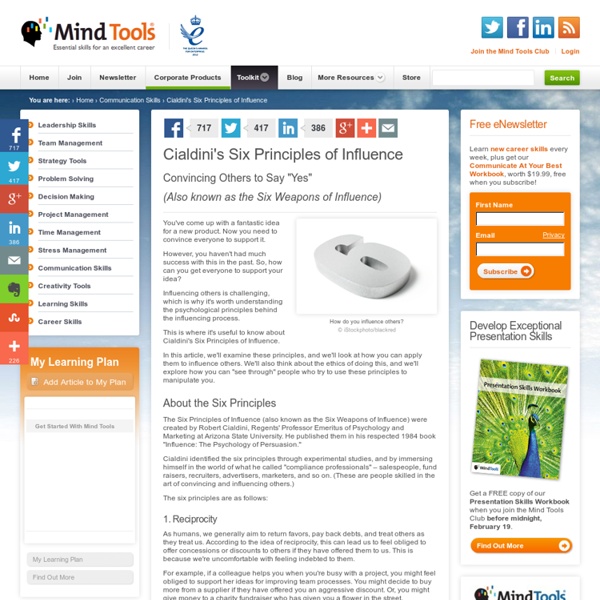 Convincing Others to Say "Yes" (Also known as the Six Weapons of Influence) How do you influence others? © iStockphoto/blackred You've come up with a fantastic idea for a new product. Now you need to convince everyone to support it. However, you haven't had much success with this in the past. Influencing others is challenging, which is why it's worth understanding the psychological principles behind the influencing process. This is where it's useful to know about Cialdini's Six Principles of Influence. In this article, we'll examine these principles, and we'll look at how you can apply them to influence others. About the Six Principles The Six Principles of Influence (also known as the Six Weapons of Influence) were created by Robert Cialdini, Regents' Professor Emeritus of Psychology and Marketing at Arizona State University. The six principles are as follows: 1. As humans, we generally aim to return favors, pay back debts, and treat others as they treat us. 2. 3. 4. 5. 6. Warning: Reciprocity

How to Criticize with Kindness: Philosopher Daniel Dennett on the Four Steps to Arguing Intelligently By Maria Popova “In disputes upon moral or scientific points,” Arthur Martine counseled in his magnificent 1866 guide to the art of conversation, “let your aim be to come at truth, not to conquer your opponent. So you never shall be at a loss in losing the argument, and gaining a new discovery.”

How to get what you want: top negotiators on the tricks of their trade The divorce lawyer Ayesha Vardag won the landmark ruling in 2010 that German heiress Katrin Radmacher’s prenuptial agreement was legally binding, protecting her £106m fortune. She also recently won the right for Pauline Chai, wife of Laura Ashley tycoon Khoo Kay Peng, to have her divorce case heard in the UK, paving the way for what could be one of the biggest divorce payouts in history.Growing up, it was just my mother and me.

Culture Explanations > Culture Culture is what happens when people get together. It tells us how to behave and agree. Intellectually-honest and intellectually-dishonest debate tactics – John T. Reed Copyright by John T. Reed This Web site is, in part, a debate between me and others with whom I take various issues. I welcome intellectually-honest debate. It is one of my favorite ways to test my theories and learn. Jedi Mind Tricks: 17 Lesser Known Ways to Persuade People Want to know how to persuade people online and get what you want? The power of influence is usually all that separates the successful from everyone else. These are some tactics, discovered through psychological research, that you have probably not yet heard about, but have the potential to increase your persuasive abilities.

How To Get People To Like You: 7 Ways From An FBI Behavior Expert Before we commence with the festivities, I wanted to thank everyone for helping my first book become a Wall Street Journal bestseller. To check it out, click here. Meeting new people can be awkward. What should you say? How can you make a good impression? The REID 9 STEPS OF INTERROGATION, IN BRIEF Most police detectives and interrogators in are trained in the following method of interrogation. Key points to look at here, the suspect really not allowed to talk much until step 8. Another key point with this technique is that it is not concerned with voluntariness of the statement until the police are recording the statement at the end of Step 9. The REID 9 STEPS OF INTERROGATION, IN BRIEF

It’s Time To Get Real About Political Correctness Typical anti political correctness meme from the PC Watch Blog It has become cool to act as if ‘political correctness’ is some kind of cultural oppression, and to elevate those who challenge it as subversive, radical, fresh-thinkers. This is part of the attractiveness of parties like UKIP, presenting themselves as a slap in the face to the mainstream. But it is actually the defense, not the dismantling of political correctness that is a radical act in modern Britain, and here is why.

Unit 2- Preparing for Business. Section 4.2- Negotiating What is Negotiation? What do these two scenerios have in common? A third grader swaps a peanut butter sandwich for a granola bar and fruit yogurt at lunchWorld leaders work out the complicated details of a peace settlement Both situations involve negotiation. Negotiation is a process in which two or more parties reach an agreement or solve a problem through communication. Dale Carnegie's Top 10 Tips for Improving Your Social Skills Image by kalandrakas. “The ideas I stand for are not mine. I borrowed them from Socrates. I swiped them from Chesterfield. I stole them from Jesus. And I put them in a book.

Is All the Truth We Need in the Data? by Jag Bhalla Is all the truth we need found in the numbers? Can the stats always chart a better course? Although it seems savvy to defer to “the data,” the devil is in the details. 1. “Eliminating all police bias,” calculates Sendhil Mullainathan (The New York Times) wouldn’t materially reduce police killings of African-Americans. Negotiation Skills Introduction: Management function techniques will never be complete without the manager and even various other employees being able to negotiate effectively. Any organization runs well based on the skills of their employees. From communication skills to negotiation skills, every organization would need to hone these skills in their workers to ensure the efficient running of a business organization. You need to understand that these negotiation skills are not very difficult to grasp and will only take time and some careful moves with the other party for you to be able to close a good deal, thereby increasing employee productivity to a great extent. Stages of Negotiation

The Four Color Personality Test - BlueHarvest.net Forum Here's something for the old fossils in the forum. (I.e. those of us who have put our classroom days behind us.) Four Color Personality tests are used by companies the world over in order to create an ideal and productive working environment for its employees. EAT BUGS: Monetary incentives distort our perceptions of what's good for us / Boing Boing There are lots of transactions that we're either prohibited from making (selling kidneys), or that are strictly regulated by statute (parental surrogacy). Naturally, these rules are hotly debated, especially among economists, who generally assume that markets of informed buyers and sellers produce outcomes that make everyone better off. In a Job Market paper, Stanford's Sandro Ambuehl describes a series of experiments that investigated the way in which incentives affect our ability to predict whether something is the best course of action for us.