How to Practice Nonviolent Communication (with Illustrations) 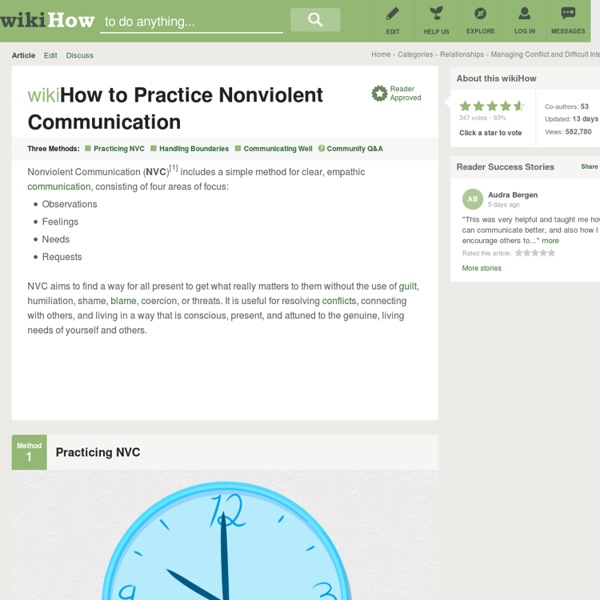 Reader Approved Three Methods:Practicing NVCHandling BoundariesCommunicating WellCommunity Q&A Nonviolent Communication (NVC)[1] includes a simple method for clear, empathic communication, consisting of four areas of focus: ObservationsFeelingsNeedsRequests NVC aims to find a way for all present to get what really matters to them without the use of guilt, humiliation, shame, blame, coercion, or threats. Steps Practicing NVC 1State the observations that are leading you to feel the need to say something. Handling Boundaries Nonviolent Communication is an idealized style of communication, and it will not work in every single situation. 1Make sure a person is open to nonviolent communication. Communicating Well 1Decide upon the solution together, if possible. Community Q&A Add New Question My husband does not always like to hear my opinion and thinks I am arguing. Ask a Question Sentence templates Sometimes, a memorized sentence template can help structure what you need to say: Video Tips Warnings Related:  Marshall Rosenberg • Nonviolent communication

The subtle violence of nonviolent language. These thoughts are occasioned by a training video (1) by Marshall Rosenberg, a 200-minute condensation of a full-day workshop given in San Francisco by his Center for Nonviolent Communication. On the Center's web site (2) can be seen the variety of audiences the Center has reached since 1984, in public workshops and invited sessions with prison populations and warring factions in the world's most intractable regions. That history is also seen in Rosenberg's presentation, in frequent anecdotes that are humbling as well as inspiring, testimony to an extraordinary career of teaching, even in desperate settings, a language of the heart. The essentials are easy to relate. Communication suffers if evaluation and judgment are confused with observation; if diagnosis of another person's inner state stands in the way of listening and seeing; if feelings and analyses, needs, wants, and strategies, requests and demands are not carefully distinguished. What's going on? To be human Thought Feeling

Hamburg course - Compassionate Communication Hamburg With the help of Nonviolent Communication (NVC) we’re going to learn to come closer to ourselves, listening carefully to what we’re thinking, feeling and needing. First we connect with the first layer, the way we’ve been educated to think: what’s right and wrong with the others/with ourselves, what we think we deserve, how we should behave in society, in family… This is where most of the violence on our planet comes from: a way of thinking made to obey authority – a language that tries to change other people using punishments, blame, guilt, shame or rewards. When caught up with becoming either the winner or the loser, it’s very challenging to experience compassion and feel happy. Connecting with this way of thinking is essential to get deeper into a more intimate space: the need space. This is a very personal quest, and for me the most important thing of my life. Frédéric has an intuitive openess and natural understanding that comes without any judgement.

Anger and Domination Systems| Northwest Compassionate Communications The following is a slightly edited transcript of part of a workshop on anger led by Dr. Rosenberg in England in May of 1999. Dr. Marshall: For me the subject of anger is very much a political issue. He gets really annoyed and he keeps changing houses because he doesn't like dealing with the fire alarm. By systems I mean governments, organizations, institutions that regulate human affairs. Domination systems require: 1. Now anger is the result, it's a fire alarm that tells us we are thinking in a way that supports domination systems; you are thinking in a way that contributes to the oppressive world order and you are part of it. So I don't want to get rid of it in that sense I don't want to be like the man who keeps moving his house because of the alarm. We have been trained to be nice dead people or bullies. How human beings develop obviously is going to affect our understanding about the nature of human beings, what we think is the nature of human beings. Marshall: The Orang Asilie.

Making Life Work. For You. For Everyone. No Exceptions. In this 6-month, 3-part telecourse, Miki Kashtan shows with astonishing clarity how, with dedication to practice and support from others, you can begin to participate in creating the world so many of us long for, a world that honors and seeks to meet the needs of everyone, that welcomes each person’s truth, that rests on faith that solutions can be found to the most challenging problems facing us, individually and collectively. Your participation starts with your willingness to risk opening to yourself in a new way: to your deepest longings, to the hearts of those who are frighteningly “other,” to the uncertainty of life without the absolutes of “right” and “wrong,” “good” and “bad.” The more people who join you in taking the first step, the nearer this world becomes. If you can say “yes” to any of the points below, then this course is definitely for you: Fridays, May 24 and 31, June 14 and 28 12:00-2:00pm PDT - My Time Zone? This class’s carefully designed practices are aimed at:

Domination Systems Domination systems as revealed by language Marshall Rosenberg describes a domination system as follows: "...By systems I mean governments, organizations, institutions that regulate human affairs. Domination systems require: 1 Suppression of self 2 Moralistic judgments 3 Amtssprache (This expression was used by Nazi officials to describe a bureaucratic language that denies choice, with words like: should, have to, ought.) 4 The crucial concept of deserve" The above quote was taken from an edited transcript of a 1999 workshop Rosenberg gave on anger entitled "Anger and Domination Systems." Let me explain what Rosenberg means by these 4 characteristics of domination systems as revealed in the language we use: 1. For the majority of us, the reason why we find it so hard to express our feelings and needs is because we are educated by our society to ignore them so we can become some kind of interchangeable part in a vast money making machine, where feelings and needs are not important. 2. 3. 4. Death

Jenseits von richtig und falsch liegt ein Ort. June | 2013 | Voluntary Visions The Language of Choice, as Juxtaposed to the Ever-Present Language of Obligation by Darrell Becker Glossary empathy (n.) – the ability to understand and share the feelings of another. 1903, from German Einfühlung (from ein “in” + Fühlung “feeling”), coined 1858 by German philosopher Rudolf Lotze (1817-1881) as a translation of Greek empatheia “passion, state of emotion,” from en “in” + pathos “feeling”. choice (n.) – an act of selecting or making a decision when faced with two or more possibilities. mid-14c., “that which is choice,” from choice (adj.) blended with earlier chois (n.) obligation (n.) – the condition of being morally or legally bound to do something. 1300, from Old French obligacion “obligation, duty, responsibility” (early 13c.) and directly from Latin obligationem (nominative obligatio) “an engaging or pledging,” literally “a binding” (but rarely used in this sense), noun of action from past participle stem of obligare. Introduction “If it’s not practical, it’s not Wisdom.”

The Power of Focusing, The Power of NVC II: Healing Alienating Spring 1985, Sunday night, and Marshall Rosenberg, in Chicago for a workshop at our home, unexpectedly drops by for Changes. As usual, we split into a couple of subgroups for Listening or Focusing, and joins mine. An "old timer", S -- truly oblivious to the needs of others and to his own processing -- offers to listen. We follow this to its end -- S says what he comes to say, what he's said every time he's come for years and with no change, none at all. erupts: "Well, I'm not fine! Me, stunned: "Huh?" : "If that'd been me, I'd be mad as hell!" I check, and by golly, I am mad as hell. : "And I'm guessing that S is pretty mad, too!" By golly, S is mad, too. Marshall listens to S, but in a much different way, and S gets to some honesty -- not to change, but to a touch of reality, connecting with what's alive in him. During an earlier Changes, Jane had spent the entire two hours Listening to S, determined to get through. I frown. And,