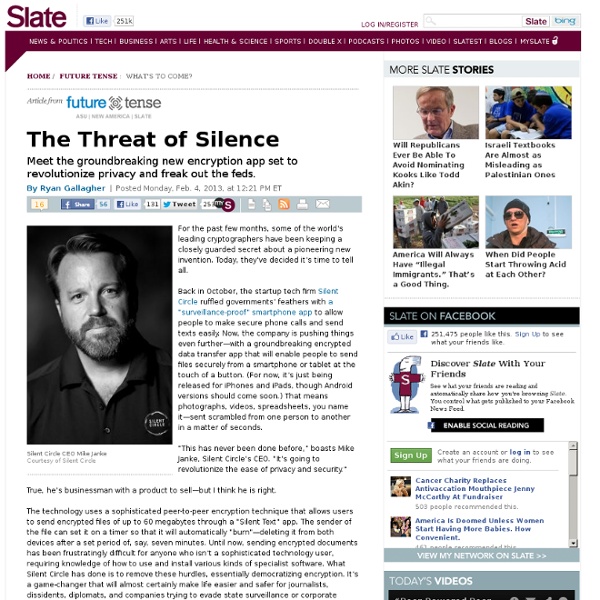 Courtesy of Silent Circle For the past few months, some of the world’s leading cryptographers have been keeping a closely guarded secret about a pioneering new invention. Today, they’ve decided it’s time to tell all. Ryan Gallagher is a journalist who reports on surveillance, security, and civil liberties. Follow Back in October, the startup tech firm Silent Circle ruffled governments’ feathers with a “surveillance-proof” smartphone app to allow people to make secure phone calls and send texts easily. “This has never been done before,” boasts Mike Janke, Silent Circle’s CEO. True, he’s a businessman with a product to sell—but I think he is right. The technology uses a sophisticated peer-to-peer encryption technique that allows users to send encrypted files of up to 60 megabytes through a “Silent Text” app. By design, Silent Circle’s server infrastructure stores minimal information about its users. The cryptographers behind this innovation may be the only ones who could have pulled it off. Related:  Computer Applications astonishing

World's oldest and stickiest lab study ready for drop of excitement | Science | The Observer In terms of output, Queensland University's pitch drop study – the world's oldest laboratory experiment – has been stunningly low. Only eight drops have emerged from the lump of pitch installed in the university's physics building foyer in 1927. Watching paint dry looks exhilarating by comparison. But excitement is now rising over the experiment, which was set up to calculate the viscosity of the world's stickiest substance, pitch, which has been found to be at least 230 billion times more viscous than water. "No one has actually seen a drop emerge, so it is getting quite nervy round here," said Mainstone. The fact that pitch – which is so brittle it can be smashed with a hammer – behaves like a fluid is the most surprising aspect of the experiment, added Mainstone.

Quantum Network Experiment Could Change The Way We Communicate : Tech Apr 09, 2013 02:07 PM EDT The theory that entangled particles, once separated, are still capable of reflecting each other instantly is a phenomenon even Albert Einstein seemed unsettled by, famously calling it, when done at a distance, "spooky." Decades after the great scientist's death, however, researchers are ready to put it into action at a distance that's never been seen before - 250 miles. As explained in a proposal published by the Institute of Physics and the New Physics Journal, researchers explain how, with only a few small changes to the International Space Station (ISS), they would be able to test the theory of quantum entanglement over a distance nearly three times that done so far. Already equipped on the ISS is the NghtPod - a Nikon camera with a 400 mm lens pointed at earth through a window in the Cupola Module. The second would consist of using the ISS as a relay point in order to send a secret encryption key far above the planet's surface.

Spike puts laser measurement hardware on the back of a smartphone Through the Spike smartphone app, users are able to capture, measure, 3D model and share any object up to 200 yards (183 m) away with what the company says is laser accuracy Image Gallery (10 images) Traditionally, the technology that goes into laser hardware for surveying and 3D modeling has been the plaything of architects, surveyors and engineers. But now, with a view to expanding into the consumer market, Virginia-based IkeGPS wants to bring this functionality to the mainstream. And what better way to do it than sticking it on the back of a smartphone? View all Spike builds on the company's established GIS (geographic information systems) tools, which were used by the UN in the wake of natural disasters such as Hurricane Katrina and the 2010 earthquake in Haiti. Users take a photo of the object they wish to measure through the Spike companion app on their smartphone (the team has nearly completed an Android app and has an iOS app in development). Source: ikeGPS About the Author

Touchable Holograms To Our Faithful Current.com Users: Current's run has ended after eight exciting years on air and online. The Current TV staff has appreciated your interest, support, participation and unflagging loyalty over the years. Your contributions helped make Current.com a vibrant place for discussing thousands of interesting stories, and your continued viewership motivated us to keep innovating and find new ways to reflect the voice of the people. We now welcome the on-air and digital presence of Al Jazeera America, a new news network committed to reporting on and investigating real stories affecting the lives of everyday Americans in every corner of the country. You can keep up with what's new on Al Jazeera America and see this new brand of journalism for yourself at Thank you for inspiring and challenging us. – The Current TV Staff

The wireless network with a mile-wide range that the “internet of things” could be built on - Quartz Robotics engineer Taylor Alexander needed to lift a nuclear cooling tower off its foundation using 19 high-strength steel cables, and the Android app that was supposed to accomplish it, for which he’d just paid a developer $20,000, was essentially worthless. Undaunted and on deadline—the tower needed a new foundation, and delays meant millions of dollars in losses—he re-wrote the app himself. That’s when he discovered just how hard it is to connect to sensors via the standard long-distance industrial wireless protocol, known as Zigbee. It took him months of hacking just to create a system that could send him a single number—which represented the strain on each of the cables—from the sensors he was using. Surely, he thought, there must be a better way. The result is an in-the-works project called Flutter. Flutter’s range is 3,200 feet in open air, but multiple Flutters can also cover even larger areas in a “mesh” network.

Wireless world record: Researchers transfer data at 100Gbps through the air One of the major obstacles for delivering faster Internet to the home is the sheer amount of work and money it takes to lay the cable. Now, researchers are coming up with a workaround that transmits the data wirelessly. The latest effort, from researchers at Germany's Karlsruhe Institute of Technology, has set a new world record for wireless data transmission. They've managed to hit 100 gigabits per second while transmitting data over 20 meters, using a frequency of 237.5 GHz. “For rural areas in particular, this technology represents an inexpensive and flexible alternative to optical fiber networks, whose extension can often not be justified from an economic point of view,” Professor Ingmar Kallfass said, according to TGDaily. TGDaily also notes that the researchers hit 100 Gbps using a single data stream. As exciting as it sounds, don't expect a big bump in home Internet speeds anytime soon.

Sproutling smart baby monitor learns and predicts baby behavior Babies don't come with instruction manuals, so the saying goes. But technology is promising to lend new parents a helping hand in the form of Sproutling, a smart baby monitor that keeps parents abreast of baby’s physical status, conditions in the baby’s room, and learns from baby's past behavior to provide specialized suggestions to sleep-deprived parents. View all The Sproutling system consists of three components; a breathable, washable band made from medical-grade, hypoallergenic silicone that the baby wears around his or her ankle; a dish that wirelessly recharges the wearable band and also monitors the room’s environmental conditions; and the Sproutling app, which collates all the data into useable observations and push notifications. All three are brought together via a home Wi-Fi network. The Sproutling team stresses that the system is not a thermometer, heart monitor, or a medical device, and thus does not need FDA approval at this time. Source: Sproutling Share

Why Don't You Try This?: Scientists Use Sound Waves To Levitate, Manipulate Matter A team of researchers in Switzerland have developed a way of levitating and transporting small objects using nothing but sound. Using ultrasonic waves – that is, sound waves whose frequency is too high for humans to hear – scientists at the Swiss Federal Institute of Technology in Zurich have made water droplets, instant coffee crystals, styrofoam flakes, and a toothpick, among other objects, hang in midair, move along a plane, and interact with each other. It is the first time that scientists have been able to use sound to simultaneously levitate several objects next to each other and move them around. Research published in the Proceedings of the National Academy of Sciences describes how objects placed between two horizontal surfaces, the bottom one emitting high-pitched sound waves and the top one reflecting the waves back, can be levitated and manipulated. As anyone with a subwoofer and a teenager knows, sound waves exert pressure. Full Article Related:

Are we all PSYCHIC? Scientists believe that animals - including humans - have a collective consciousness Behaviours found to spread throughout species seemingly telepathicallyThese behaviours were adopted among groups that had never metThis led scientists to believe they're spread via a collective consciousnessBlue tits and macaques among species that share behaviours this wayReport in 2010 claimed to have proved humans have similar psychic skills However, these claims have been dismissed some scientists in more recent reports By Victoria Woollaston Published: 14:58 GMT, 19 November 2013 | Updated: 16:03 GMT, 19 November 2013 Some may call it coincidence, while others call it a sixth sense but why do people think about someone right before they call, for example, or ‘have a feeling’ something is about to happen before it does? It may be due to something called collective consciousness - a term used by certain scientists to describe the practice of humans, and animals, sharing behaviours and ideas with each other telepathically. A similar practice was more recently observed among blue tits.

Latest supercomputers run truer simulations of extreme weather High-resolution simulations of the global climate can now perform much closer to actual observations, and they perform far better at reproducing extreme weather events, a new Berkeley Lab study has found. Lead author Michael Wehner heralds this news as evidence of a golden age in climate modeling, as not only did the simulation closer match reality but it also took a fraction as long to complete as it would have in recent history – just three months compared to several years. "These kinds of calculations have gone from basically intractable to heroic to now doable," Wehner said. "I've literally waited my entire career to be able to do these simulations." The researchers used a CRAY XE-6 supercomputer at the National Energy Research Supercomputing Center to conduct their analysis for the period 1979 to 2005 at three spatial resolutions – 25 km (15.5 mi), 100 km (62 mi), and 200 km (124 mi) – and then compared the results to both each other and to real-world observations. Share