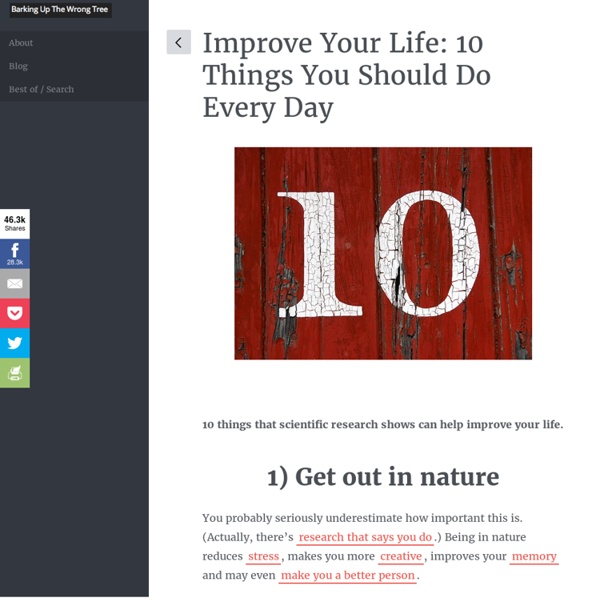 10 things that scientific research shows can help improve your life. 1) Get out in nature You probably seriously underestimate how important this is. (Actually, there’s research that says you do.) Being in nature reduces stress, makes you more creative, improves your memory and may even make you a better person. 2) Exercise We all know how important this is, but few people do it consistently. 3) Spend time with friends and family Harvard happiness expert Daniel Gilbert identified this as one of the biggest sources of happiness in our lives. 4) Express gratitude It will make you happier. It will improve your relationships. It can make you a better person. It can make life better for everyone around you. 5) Meditate Meditation can increase happiness, meaning in life, social support and attention span while reducing anger, anxiety, depression and fatigue. 6) Get enough sleep You can’t cheat yourself on sleep and not have it affect you. Naps are great too. 7) Challenge yourself 8) Laugh 9) Touch someone

How Trigger Warnings Are Hurting Mental Health on Campus Something strange is happening at America’s colleges and universities. A movement is arising, undirected and driven largely by students, to scrub campuses clean of words, ideas, and subjects that might cause discomfort or give offense. Last December, Jeannie Suk wrote in an online article for The New Yorker about law students asking her fellow professors at Harvard not to teach rape law—or, in one case, even use the word violate (as in “that violates the law”) lest it cause students distress. In February, Laura Kipnis, a professor at Northwestern University, wrote an essay in The Chronicle of Higher Education describing a new campus politics of sexual paranoia—and was then subjected to a long investigation after students who were offended by the article and by a tweet she’d sent filed Title IX complaints against her.

7 Ways You Can Easily Increase Your Willpower In general, people have an overly positive vision of themselves and their abilities. But what’s the one thing surveys show most everyone will admit they have a problem with? Self-control. And who is most likely to give in to temptation? A Message to the People-Pleasers: You are not Helping Anyone. What would you say takes up the vast majority of our time—mental space and energy? Work? Parenting? Bill-paying? Maybe it’s anxiety, personal relationships or money stress? It’s likely none of those things. Video - Hot Blooded WarmUp Workout - Atlanta Holistic Health Prevent injury and lessen fatigue. Warming up seems like it can be a waste of time but it is very important to the health of your body chemistry and your muscles and bone. Warming up is a signal to your body that activity is on its way and is increasing it is a good way to get your metabolism to wake up. Short burst without a warm up When your body cores doesn’t get a chance to thoroughly warm up before entering continuous exercise it thinks it is going it to a “fight or flight” mode and doesn’t work to burn calories efficiently.

Happy Thoughts: Here are the things proven to make you happier: Time to round up the research on living a happy life to see what we can use. First, yeah, a good chunk of happiness is controlled by your genes but there’s a lot you can do to make yourself happier. Many of these techniques have been repeatedly tested and even worked with the clinically depressed. Gratitude, Gratitude, Gratitude I can’t emphasize this one enough. Showing gratitude for the good things you have is the most powerful happiness boosting activity there is. How To Motivate Yourself: 3 Steps Backed By Science You make goals… but then you procrastinate. You write a to-do list… but then you don’t follow through. And this happens again and again and again. Seriously, what’s the problem? Why are we so good at thinking of what to do but so terrible at actually doing those things? The problem is you’re skipping an essential step.

23 Body Language Tricks That Make You Instantly Likeable You send people signals all day, without paying attention to them. The way you move your eyes, the way you shake a hand and so on. There are things you can do to send subconscious signals using body language that make people like you better, or at least give you the benefit of the doubt. Whenever I discuss techniques like these there are always one or two people who feel uncomfortable with ‘influencing’ someone with psychological tricks.

Adductor Stretch for Inner Thigh Muscles The inner and outer thigh muscles are often forgot about when performing stretches, however these muscles are often the cause of a lot of injury problems. Sports such as football and those require lateral (side) movements can often cause the adductor (inner thigh muscles) to be overstretched. Performing the simple toe grab inner thigh stretch will help to relieve the tension build up within the muscle region. The biggest muscle in the body (Gluteus maximus) i.e. the muscle in the buttock, performs a number of function, and as such is often overworked and tense. Tension in the glut muscles, can cause a very common complaint such as sciatica, as the muscle tension places pressure on the sciatic nerve. What are the four things that kill relationships? John Gottman can listen to a couple for 5 minutes and determine, with 91% accuracy, whether they’ll divorce. He was featured in Malcolm Gladwell’s book Blink. Gottman’s researched marriage for over 40 years and couples that attend his workshops have half the relapse rate that standard therapy provides. His book The Seven Principles for Making Marriage Work is excellent and rich with information. In it he debunks a lot of myths about marriage, explains why marriages go bad and what can be done about it. The Four Horsemen

Random Acts of Kindness Start A Kindness Journal Or Blog "No act of kindness, however small, is ever wasted." -Aesop Volunteer At A Food Bank There are many ways to help your local food bank. 17 Books To Read If You Want To Become A Billionaire Success is magnetic. As a species, we’re constantly studying how it happens, why it happens, who has achieved it for themselves, and how we can obtain it. One thing is for sure: money is an echo of value. Those who bring great products, services, businesses, and ideas into the world are rewarded (at least somewhere along the way) with financial gain.