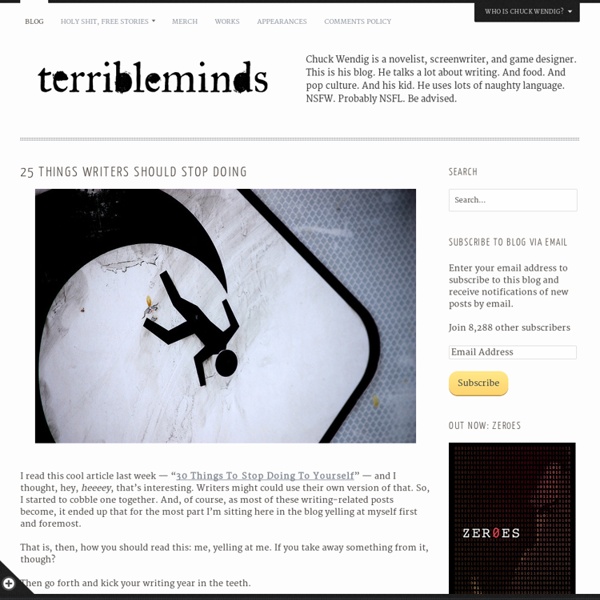 I read this cool article last week — “30 Things To Stop Doing To Yourself” — and I thought, hey, heeeey, that’s interesting. Writers might could use their own version of that. So, I started to cobble one together. And, of course, as most of these writing-related posts become, it ended up that for the most part I’m sitting here in the blog yelling at myself first and foremost. That is, then, how you should read this: me, yelling at me. If you take away something from it, though? Then go forth and kick your writing year in the teeth. Onto the list. 1. Right here is your story. 2. Momentum is everything. 3. You have a voice. 4. Worry is some useless shit. 5. The rise of self-publishing has seen a comparative surge forward in quantity. 6. I said “stop hurrying,” not “stand still and fall asleep.” 7. It’s not going to get any easier, and why should it? 8. 9. The mind is the writer’s best weapon. 10. 11. 12. Writers are often ashamed at who they are and what they do. 13. Yeah, yeah, yeah. 14.

How to Write a Novel– Part 1: Plan & Outline Course Syllabus edX: UBCx – CW1.1x. Instructors: Nancy Lee and Annabel Lyon University of British Columbia Creative Writing Program Writing Quickly: A Secret Strategy I wrote a blog post about a month back in which I gave a couple of tips for writing quickly. This is not a repetition of that post, but rather an expansion. You see, when I wrote that post I mentioned this thing I hadn't tried, but I'd heard a lot about called Write or Die. In short, Write or Die is an app meant to strip out all other distractions and get you writing.

100 Exquisite Adjectives By Mark Nichol Adjectives — descriptive words that modify nouns — often come under fire for their cluttering quality, but often it’s quality, not quantity, that is the issue. Plenty of tired adjectives are available to spoil a good sentence, but when you find just the right word for the job, enrichment ensues. Practice precision when you select words. Here’s a list of adjectives: hero's journey "A Practical Guide to Joseph Cambell’s The Hero with a Thousand Faces" by Christopher Vogler © 1985 “There are only two or three human stories, and they go on repeating themselves as fiercely as if they had never happened before.” In the long run, one of the most influential books of the 20th century may turn out to be Joseph Campbell’s THE HERO WITH A THOUSAND FACES.

Eight Secrets Which Writers Won’t Tell You Image from Flickr by Lazurite This is not particularly relevant to the post, but I’m getting an awful lot of comments telling me, often a little snarkily, “it’s ‘THAT’ not ‘WHICH’”. The “don’t use which for restrictive clauses” rule comes (as far as I can tell) from Strunk and White. Plenty of authors, including Austen, have used “which” exactly as I use it in the title.

Creative Writing This Specialization covers elements of three major creative writing genres: short story, narrative essay, and memoir. You will master the techniques that good writers use to compose a bracing story, populated with memorable characters in an interesting setting, written in a fresh descriptive style. You will analyze and constructively evaluate peer writing. 25 Things Writers Should Start Doing Consider this, if you will, a sequel to the gone-viral post, “25 Things Writers Should Stop Doing (Right Fucking Now)” — sort of a mirrored-reflection be-a-fountain-not-a-drain version. Now, a warning, just in the rare instance you don’t come to this site all that often: Here There Be Bad Words.

36 Writing Essays by Chuck Palahniuk 1: Establishing Your Authority Chuck teaches two principal methods for building a narrative voice your readers will believe in. Discover the Heart Method and the Head Method and how to employ each to greatest effect. 2: Developing a Theme

Cult Films Directors with Cult Status: Ed Wood Oft-maligned Ed Wood has generally been regarded as the worst Hollywood film-maker of all time - and therefore has a number of classic cult films in his filmography. His directorial debut film was titled Glen or Glenda? (1953) (aka I Changed My Sex, I Led Two Lives, The Transvestite, or He or She) - about cross-dressing, with Wood starring as a transvestite struggling with his addiction to angora, and Bela Lugosi as the narrator. The comically-awful Bride of the Monster (1955) displayed the following teaser on its posters: "The Screen's Master of the Weird in his Newest and Most Daring Shocker!" guest blogger - Sasha from The Guilded Bee: Here's another DIY project from our sweet friend, Sasha - from the The Gilded Bee. Be sure to check out her awesome shop full of handmade packaging lovelies. Thanks for being here with us Sasha! I'm delighted to share my book tutorial with you today:

Free 3-Week Flash Fiction Class No matter what writing skills you have right now… And even if you’ve never written a word of fiction in your life… “In Just 3 Weeks, You Will Know How To Write Good Story Beginnings, Compelling Middles, and Both “Opposites” and “Dramatic Irony” Twist Endings…For FREE.” And you’ll have fun learning how to do it. Odds are pretty good you’ve never read anything by me, in spite of the fact that I now have more than thirty novels in print, millions of copies in a dozen languages, and have a career that started with my first sale in 1991, and is still going strong.