If You Want To Be a Rebel, Be Kind, by Nipun Mehta. Pancho Ramos Stierle The police had declared Monday, November 14th of 2011, as the day of the raid on the Occupy Oakland encampment. 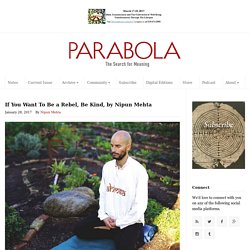 Thoreau on How to Use Civil Disobedience to Advance Justice. We're Taught From Birth to Obey Authority—But What Should We Do If the Authority Is Wrong? 5 Acts of Creative Disruption. The shadow of corporate domination has never felt so powerful—but neither has the ingenuity of resistance. 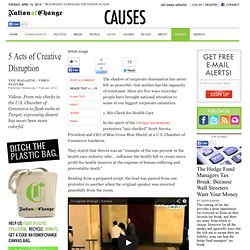 Here are five ways everyday people have brought national attention to some of our biggest corporate calamities. 1. Mic Check for Health Care In the spirit of the Occupy movement, protesters "mic checked" Scott Serota, President and CEO of Blue Cross Blue Shield, at a U.S. It’s Raining Money in Seattle. Love Bombs! Pictures to make you think.... Daniel Spaulding's Photos. Occupy Sandy: Why Activists Are Working with NYC Mayor, Police. Two hundred people were lined up at a hurricane relief center in a park in Brooklyn’s Red Hook neighborhood on Sunday morning when three volunteers hoisted the banners of two enemy camps that had come together in an uneasy collaboration: the Occupy movement and the office of New York City Mayor Michael Bloomberg. 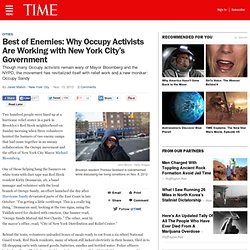 One of those helping hang the banners on white tents with duct tape was Red Hook resident Kirby Desmarais, 26, a band manager and volunteer with the local branch of Occupy Sandy, an effort launched the day after Hurricane Sandy devastated parts of the East Coast in late October. Occupy Sandy Efforts Highlight Need for Solidarity, Not Charity. Share Hurricane Sandy, the unprecedented superstorm that ravaged the Caribbean and the East Coast of the United States, left large swaths of New York City destroyed and ultimately killed 109 people in the US alone. 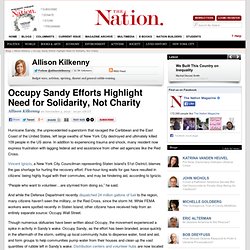 In addition to experiencing trauma and shock, many resident now express frustration with lagging federal aid and assistance from other aid agencies like the Red Cross. Vincent Ignizio, a New York City Councilman representing Staten Island’s 51st District, blames the gas shortage for hurting the recovery effort. Occupy the hood. In The Era Of Big Boxes, A Day For The Little Guy. CHAGRIN FALLS, Ohio -- It began quietly, as an email to 40 friends. 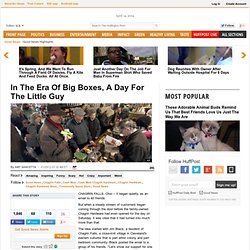 But when a steady stream of customers began coming through the door before the family-owned Chagrin Hardware had even opened for the day on Saturday, it was clear that it had turned into much more than that. The idea started with Jim Black, a resident of Chagrin Falls, a close-knit village in Cleveland's eastern suburbs that is part artist colony and part bedroom community. Black posted the email to a group of his friends. Keep Wall Street Occupied (Part 1) Movement "I DON'T PAY" is spreading across Europe (english subs) Vermin Supreme: When I'm President Everyone Gets A Free Pony. Colbert Super PAC Ad - Attack In B Minor For Strings - The Colbert Report - 2012-15-01. Colbert Super PAC Ad - Undaunted Non-Coordination - The Colbert Report - 2011-07-11. Blow the Whistle on Congress. Cthulhu Dagon 2012.

Republican Test. Again with the pots! Louder this time! 8pm EST! #potsinprogress. This Guy Took Out a Gigantic Loan to Destroy the Financial System. In 2008, anticapitalist campaigner Enric Durán borrowed €492,000 ($642,306) from 39 different financial entities with absolutely no hope or intention of paying it back. 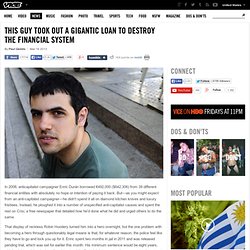 But—as you might expect from an anti-capitalist campaigner—he didn't spend it all on diamond kitchen knives and luxury frisbees. Instead, he ploughed it into a number of unspecified anti-capitalist causes and spent the rest on Crisi, a free newspaper that detailed how he'd done what he did and urged others to do the same. That display of reckless Robin Hoodery turned him into a hero overnight, but the one problem with becoming a hero through questionably legal means is that, for whatever reason, the police feel like they have to go and lock you up for it. Enric spent two months in jail in 2011 and was released pending trial, which was set for earlier this month. 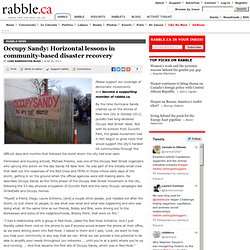 By the time Hurricane Sandy crashed up on the shores of New York City in October 2012, pundits had long-declared Occupy Wall Street 'dead.' But with its eviction from Zuccotti Park, the global movement had in fact begun to grow roots that would support the city's hardest hit communities through the difficult days and months that followed the worst storm the city had ever seen. Occupy Together Field Manual - Occupation Community Interdependence and Sustainability Information. Rising Up Without Burning Out. Civil Disobedience Training. Blockadingforbegineers.pdf (application/pdf Object) Cell Phone Guide for Occupy Wall Street Protesters (and Everyone Else) Occupy Wall Street has called for a global day of action on October 15, and protesters are mobilizing all over the world. In the United States, the Occupy Wall Street movement has already spawned sizeable protests in New York, Washington DC, Boston, Seattle, San Francisco, Oakland, Austin, and other cities.

Several of these movements have faced opposition from their local police departments, including mass arrests. Protesters of all political persuasions are increasingly documenting their protests -- and encounters with the police -- using electronic devices like cameras and cell phones. The following tips apply to protesters in the United States who are concerned about protecting their electronic devices when questioned, detained, or arrested by police. These are general guidelines; individuals with specific concerns should talk to an attorney. Know Your Rights: What To Do If You're Stopped By Police, Immigration Agents or the FBI. OWS J29: Pepper Spray Remedy: Maalox. Occupy 2.0: The Great Turning by Michael Nagler. Michael Nagler on building a movement to build a new reality. posted Apr 05, 2012. 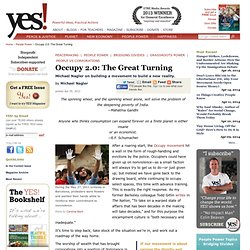 Scilla Elworthy: Fighting with non-violence. Part 3: Norman Finkelstein on What Gandhi Says About Nonviolence, Resistance and Courage. 198 Methods of Nonviolent Action. Albert Einstein Institution. Learn about nonviolent conflict and civil resistance. The Ruckus Society : Nationwide Capacity-Building for Occupy Together. Press Room Contact Us Get Updates Home » About Us Search. 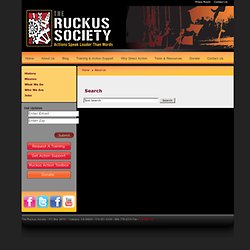 Occupy! Now What? « MADE IN AMERICA. One can sympathize with the central message of the Occupy movement that economic inequality and injustice have gone too far (a message recently reaffirmed by the Congressional Budget Office’s report on inequality, the Census Bureau’s new report on poverty, and the Justice Department’s criminal complaints against financial operators) and still have the foreboding that things will not turn out well. 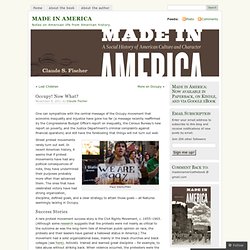 Paul Stein/Flikr Street protest movements rarely turn out well. In recent American history, it seems that if protest movements have had any political consequences of note, they have undermined their purposes probably more often than advanced them. The ones that have celebrated victory have had strong organization, discipline, defined goals, and a clear strategy to attain those goals – all features seemingly lacking in Occupy. Success Stories A rare protest movement success story is the Civil Rights Movement, c. 1955-1965.

For the Fracture of Good Order. “Our apologies, good friends, for the fracture of good order, the burning of paper instead of children….” These were Father Daniel Berrigan’s words when he was on trial in 1969 for a draft board raid in Catonsville, Maryland. He and eight others had entered the draft board office during business hours, removed draft files (against some resistance from the staff) and then burned them out front with homemade napalm. At the time, there were many who construed this as an act of violence and, given the denunciations of property destruction emerging out of Oakland today, there are many in our current day who would undoubtedly agree. But Berrigan and many of the others who carried out draft board raids were principled pacifists and did not understand the destruction of draft files as an act of violence.

How To Occupy. Encampment organization clip. Walk Through Zuccotti Park OWS NYC 10/02/11. Tent City University – one of the most remarkable aspects of Occupy London. When, as now seems likely, the Occupy London protesters are forced to pack up their tents outside St Paul's Cathedral the capital will be losing more than one of its newer and less likely tourist attractions.