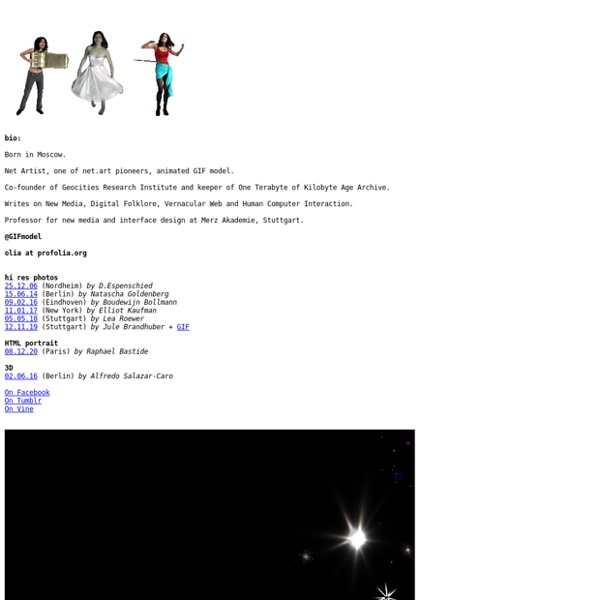 On the 22nd of April 2013 Olia Lialinabacked her first ever cake, for somebody very special. Still fun to be a GIF But when retired I want to be a JPEG Tiled In the background of your profile Olia Lialina is a frequent Internet Cafe visitor bio: Born in Moscow. Net Artist, one of net.art pioneers. Related:  olia lialina

NECHVATAL 2 home base © Joseph Nechvatal 93 Blvd Raspail F - 75006 Paris e-mail: jnech@thing.net Disclaimer We cannot assume any liability for the content of external pages. Solely the operators of those linked pages are responsible for their content. We make every reasonable effort to ensure that the content of this Web site is kept up to date, and that it is accurate and complete. Registered trademarks and proprietary names, and copyrighted text and images, are not generally indicated as such on our Web pages. Haftungshinweis: Trotz sorgfältiger inhaltlicher Kontrolle übernehmen wir keine Haftung für die Inhalte externer Links (§ 5 TDG).

eagereyes – Visualization and Visual Communication Olia Lialina Olia Lialina (born in Moscow) is a pioneer Internet artist and theorist as well as an experimental film and video critic and curator. Lialina studied film criticism and journalism at Moscow State University, then followed with art residencies at C3 (Budapest,) and Villa Walderta (Munich,).[1] She founded Art Teleportacia, a web gallery of her work, which also features links to remakes of her most famous work "My boyfriend came back from the war" [2] and was one of the organizers and later, director of Cine Fantom, an experimental cinema club in Moscow co-founded in 1995 by Lialina with Gleb Aleinikov, Andrej Silvestrov, Boris Ukhananov, Inna Kolosova and others. In 2012 Lialina coined the term Turing Complete User in an essay of the same name.[6] The piece was well received internationally and got reviews by Bruce Sterling [7] and Cory Doctorow [8] among others. Works[edit] Olia Lialina created the netart work My Boyfriend Came Back From The War. References[edit] Further reading[edit]

agnès de cayeux mailto:adc@agnesdecayeux.fr Alissa figure féminine, persistante Justagurl23 récit inspiré de YT Level7 récits mobiles In my room installation en réseau, chambre de lectures, livre et film I'm just married écrans connectés 12 notes écrans connectés kavko What Killed The Infographic? A few years ago, the Internet was awash in groundbreaking data visualizations. There was Aaron Koblin's deeply influential map of flight patterns around the U.S. Periscopic's exhaustive, haunting portrait of gun violence in the United States. Jer Thorp and John Underkoffler's Minority Report-like interface for exploring the galaxy. Today, you'd be lucky to find a cheap knockoff in a world dominated by crappy promotional infographics churned out for viral attention. Nicholas Felton, the data viz guru who once designed Facebook's Timeline, now builds apps. Infographics, it seems, are a dying breed. Data Viz Has Gone Corporate Years ago, the hardest part of a data visualization designer's job was explaining what he did and why it was worthwhile. The upshot is that some of the best data visualization work is going unseen, as Fortune 500 companies hire data visualization designers for NDA work or snatch them up for full-time work. Tableau is a bit like Excel. So Where Is This All Going?

Olia Lialina, 'Summer' (2013) Summer (2013). Olia Lialina. Screenshot of animation comprising individual GIF images displayed across multiple websites. In a 2006 interview with Valeska Buehrer, artist Olia Lialina observed that her early web-based works, particularly My Boyfriend Came Back from the War, have been irrevocably changed by the accelerating speed of the internet. Though the work is still as it was: same files, same address, links -- it is now more like a documentation of itself. It wasn't that Lialina was inspired at the time by the creative possibilities of the slow-to-load early web (she recalls being as frustrated as any user); it was that the work functioned within a specific technological context. Lialina's increasing awareness of the interplay between technological context and artwork is at the forefront of her latest work, Summer (2013). In other words: MTAA, Simple Net Art Diagram, c. 1997.