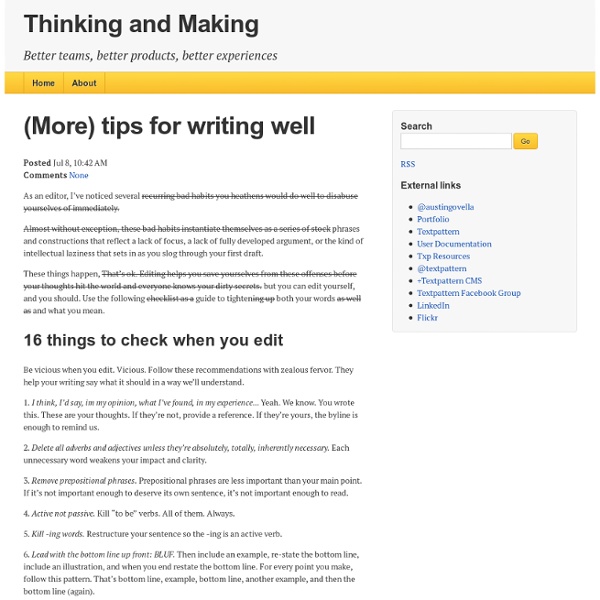 Published Wed, Jul 8, 2009 by Austin Govella. Updated Wed, Jul 8, 2009. As an editor, I’ve noticed several recurring bad habits you heathens would do well to disabuse yourselves of immediately. Almost without exception, these bad habits instantiate themselves as a series of stock phrases and constructions that reflect a lack of focus, a lack of fully developed argument, or the kind of intellectual laziness that sets in as you slog through your first draft. These things happen, That’s ok. Editing helps you save yourselves from these offenses before your thoughts hit the world and everyone knows your dirty secrets. but you can edit yourself, and you should. 16 things to check when you edit Be vicious when you edit. 1. 2. 3. 4. 5. 6. 7. 8. 9. 10. 11. 12. 13. 14. 15. 16. After you edit… The finished piece should be so tight, terse, concise, and clear that it’s boring. Boring. Then sand off the rough edges. Write like you talk.

#54 – Writing Hacks, Part 1: Starting By Scott Berkun, Aug. 28 2006 (#54) Writing is easy, it’s quality that’s hard. Any idiot who knows 5 words can write a sentence (e.g. 20 Common Grammar Mistakes That (Almost) Everyone Makes I’ve edited a monthly magazine for more than six years, and it’s a job that’s come with more frustration than reward. If there’s one thing I am grateful for — and it sure isn’t the pay — it’s that my work has allowed endless time to hone my craft to Louis Skolnick levels of grammar geekery. As someone who slings red ink for a living, let me tell you: grammar is an ultra-micro component in the larger picture; it lies somewhere in the final steps of the editing trail; and as such it’s an overrated quasi-irrelevancy in the creative process, perpetuated into importance primarily by bitter nerds who accumulate tweed jackets and crippling inferiority complexes.

25 Insights on Becoming a Better Writer When George Plimpton asked Ernest Hemingway what the best training for an aspiring writer would be in a 1954 interview, Hem replied, “Let’s say that he should go out and hang himself because he finds that writing well is impossibly difficult. Then he should be cut down without mercy and forced by his own self to write as well as he can for the rest of his life. At least he will have the story of the hanging to commence with.” Today, writing well is more important than ever. Poem Starters and Creative Writing Ideas Enter your e-mail to get the e-book for FREE. We'll also keep you informed about interesting website news. "I have searched the web and used different worksheets, but none have come close to your worksheets and descriptions of (what to do and what not to do). Both courses I have taken have with Creative Writing Now have been amazing. Each time I have learned something new. The one thing I love, you take everything apart and give examples." - Katlen Skye

25 Things You Should Know About Character Previous iterations of the “25 Things” series: 25 Things Every Writer Should Know 25 Things You Should Know About Storytelling And now… Here you’ll find the many things I believe — at this moment! How to write a book – the short honest truth Every author I know gets asked the same question: How do you write a book? It’s a simple question, but it causes unexpected problems. On the one hand, it’s nice to have people interested in something I do. If I told people I fixed toasters for a living, I doubt I’d get many inquires. Characterisation How to write convincing characters Characterisation - the task of building characters - isn't easy. But if you're struggling to build characters with real life and vigour, here is our very own patented technique. If you haven't yet started your book, then work on the exercise below before you start. If you have started, but think that maybe you started prematurely, then back up, do the exercise and then look back over your existing work.

Spice Up Your Writing With Dialogue by Judy Cullins Does your chapter sound like a report? Does it go on and on with past tense sentences that tell, rather than show? To spice up your self help, non-fiction or fiction book and even promotional writing, you need to use much more dialogue. Why? Because dialogue presents your story through your characters' hearts and minds. The Best 100 Opening Lines From Books Chosen by: Clare Balding “It was the best of times, it was the worst of times, it was the age of wisdom, it was the age of foolishness, it was the epoch of belief, it was the epoch of incredulity, it was the season of Light, it was the season of Darkness, it was the spring of hope, it was the winter of despair, we had everything before us, we had nothing before us, we were all going direct to Heaven, we were all going direct the other way.” A Tale Of Two Cities, Charles Dickens

25 Things Every Writer Should Know An alternate title for this post might be, “Things I Think About Writing,” which is to say, these are random snidbits (snippets + tidbits) of beliefs I hold about what it takes to be a writer. I hesitate to say that any of this is exactly Zen (oh how often we as a culture misuse the term “Zen” — like, “Whoa, that tapestry is so cool, it’s really Zen“), but it certainly favors a sharper, shorter style than the blathering wordsplosions I tend to rely on in my day-to-day writing posts. Anyway. Peruse these. Absorb them into your body. George Orwell’s 5 Rules for Effective Writing In our society, the study of language and literature is the domain of poets, novelists, and literary critics. Language is considered a decorative art, fit for entertainment and culture, but practically useless in comparison to the concrete sciences. Just look at the value of a college degree in English versus one in computer science or accounting. But is this an accurate assessment of value? Language is the primary conductor between your brain and the minds of your audience.

Getting NaNoWriMo Done: How to Write a Novel in 30 Days With November 1st almost upon us, NaNoWriMo is set to begin. There are plenty of tools to help budding novelists achieve the goal of 50,000 words in 30 days, but what about the reasons behind committing to such a daunting task in the first place? Surely, many of those taking on the challenge have other priorities that they have to deal with – myself included – so adding on the pressure of pushing through those commitments and the occasional bout of writer’s block is going to take herculean effort, right? Well, yes…and no. Just as there are many people who have yet to give NaNoWriMo a try, there are many who have – and have met the challenge while maintaining a modicum of their regular lives (and sanity) in the process.

Character Chart for Fiction Writers - EpiGuide.com If you're a fiction writer -- whether you're working on a novel, short story, screenplay, television series, play, web series, webserial, or blog-based fiction -- your characters should come alive for your reader or audience. The highly detailed chart below will help writers develop fictional characters who are believable, captivating, and unique. Print this page to complete the form for each main character you create. IMPORTANT: Note that all fields are optional and should be used simply as a guide; character charts should inspire you to think about your character in new ways, rather than constrain your writing. Fill in only as much info as you choose. Have fun getting to know your character! How to Write a Script: 29 steps Steps Part 1 of 5: Learning Scripting Conventions 1Have a title page. Your script will need a title page. This will include the title and your name, but it will also include your contact information and your agent's information (if you have an agent). Ad 2Use the correct font, margins and breaks.