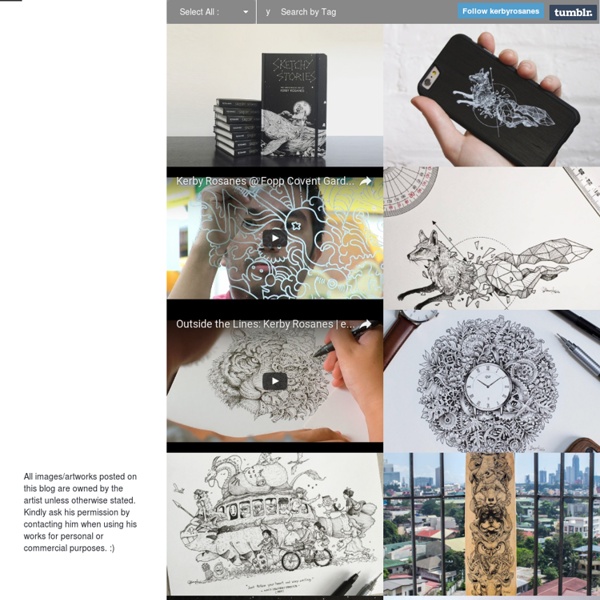 Doodled Family Tree Months ago, a very interesting commissioned project landed on my email. The work was extra special not just because the final piece was really huge but it is something very “ memorable ”. The client was looking for some unique art display in their lounge that they see something new every time they look at it. The work is a “ doodled family tree ”, commissioned for the Sawyer family in United Kingdom. It is basically a big doodle artwork resembling a tree profile stuffed with various things that symbolizes some memories of the family.

We are all homeless: The "WE ARE ALL HOMELESS" Project - an introduction This project began in 1993 when I started buying and collecting signs from the homeless. (More on that in the description of the art show HOME?) Over the past few years I have developed art work using the signs, which became focused while I was pursuing an MFA in Arts & Technology at UTDallas. In the Fall 2009 semester we were challenged to develop an art project that would be interventionist in nature, meaning that it would cause some interruption in our daily lives, which resulted in the development of WE ARE ALL HOMELESS. It began as a series of "flash mob happenings," where a few dozen people holding up authentic homeless signs converged on an intersection or other public location (2009-2010).

pose library for figure & gesture drawing practice You can upload images that you would like to draw using quickposes ! Share your work at the official Quickposes thread on conceptart.org. Procedure ikeduende.com Tamayo on Ikebana Ikebana is not just about flower arranging. Through the act of ikebana, you become involved in the process of terminating the life of a botanical creature, of discovering the beauty, mystery and power of plants, and the variety of possible outcomes is simply enormous! By creating a momentary art piece, ikebana instills in us a positive attitude, a fortitude and an ability to concentrate deeply. This is one way to enrich our lifestyle.

Creative Illustrations by Veronique Meignaud Veronique Meignaud (b.1984) is a french illustrator living in Montreal since 2010. In 2004, after 2 years of formal training at the Emile Cohl Art School in Lyon (France), she started working in the video game industry as a conceptual artist. She has also worked for several publishers and a little for the fashion industry.

david hockney: me draw on iPad oct 11, 2011 david hockney: me draw on iPad copenhagen’s louisiana museum exhibited david hockney’s digital paintings in ‘me draw on iPad’ presented at the louisiana museum of modern art in copenhagen, ‘me draw on iPad‘ is an exhibition of the digital paintings created by british artist david hockney using the iPhone and iPad with the ‘brushes’ app. the installation includes 20 touch iPods and 20 iPads mounted along the walls, on each of which several paintings are exhibited on a sequential loop. a large-format triptych slide show directed by hockney displays additional works, while several projections showcase footage of hockney’s process and a start-to-finish animation playback of several pieces. over the course of the exhibition, hockney occasionally sent new iPad drawings via e-mail to be added to the show, illustrating an interesting potential that the digital medium offers for museum exhibition.

30 New Examples Of Fantastic Photo Manipulation Photo manipulation is an art evolving collaboration between photography and Photoshop. Because the manipulation of a photo gives a realistic view of an unreal picture, you have to have creative ideas when making touch. 30 New Examples Of Fantastic Photo Manipulation Snow Drawings, Rabbit Ears Pass, CO, Sunday Jan. 29, 2012 This large-scale Snow Drawing piece was created with the generous assistance of 5 volunteers from Steambaot Springs and Hayden, Colorado. The photos were taken during a flyover in local pilot Jack Dysart’s Cessna aircraft. All images on this blog © Sonja Hinrichsen – reproduction of images only with permission contact: sonja[at]s-hinrichsen.net

Beautiful Illustrations by Goro Fujita Goro Fujita is a Visual Development Artist and Animator born in Japan, currently living and working in Redwood City. His artworks are fascinating. If you guys love digital cartoon illustrations, make sure to scroll through the best of Goro below. Enjoy! More Images Author Outsider art The term outsider art was coined by art critic Roger Cardinal in 1972 as an English synonym for art brut (French: [aʁ bʁyt], "raw art" or "rough art"), a label created by French artist Jean Dubuffet to describe art created outside the boundaries of official culture; Dubuffet focused particularly on art by those on the outside of the established art scene, such as psychiatric hospital patients and children.[1][2] While Dubuffet's term is quite specific, the English term "outsider art" is often applied more broadly, to include certain self-taught or naïve art makers who were never institutionalized. Typically, those labeled as outsider artists have little or no contact with the mainstream art world or art institutions. In many cases, their work is discovered only after their deaths.

Japanese Illustrator Marumiyan Japanese illustrator Marumiyan began to draw in his youth under the influence of his father. His works are composed of many different colours and shapes. Spread your love! nanoART 2015 - Nanosciences Purpose of the Contest The contest supports the atmosphere of discovery and wonder that nanoscience and nanotechnology research represent. The first objective of this competition is for participants to have fun. The second objective is to promote the public interest and acceptance of nanos: people new to the subject really begin to understand it when they see compelling pictures. Many of the illustrations, models and nanoscopic images produced in researching nanoscale science are very artistic in nature, transcending basic illustration.