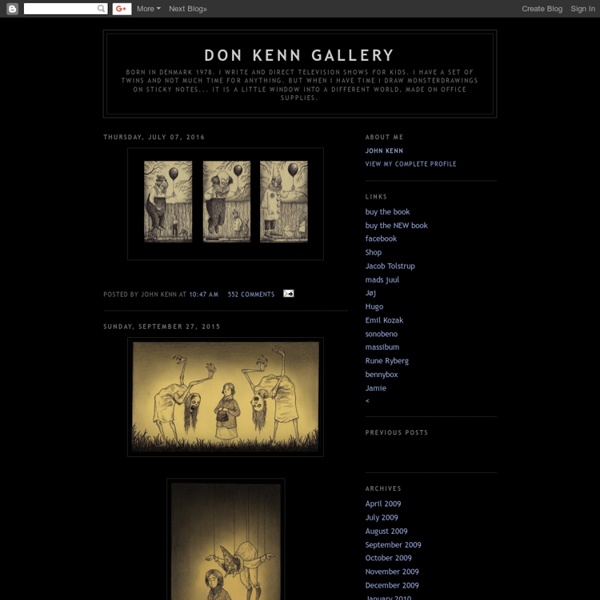 lei-melendres on deviantART Celebrating the Art of the Doodle: 20 Awesome Doodles & Escape Into Life - StumbleUpon Faith Georgia Jabson Rodrigues molossus aka rooibas Jim Bradshaw Matt Lyon jdfy333 Sam Morrison Penny Raile Mariann Johansen Ellis celiaaa Roy Snippy Snippy Don Moyer Artimess Filippo Daniel Dors Sherrie Thai Dave Bollinger eklektick jdyf333 Check out the essay, “Beyond the Doodle,” by David Maclagan Przemek Blejzyk on Behance Marco Mazzoni “The Encyclopedia of Impossible Animals”, fantastic coloured pencil and ink drawings from Marco Mazzoni’s sketchbook. marcomazzoni.tumblr.com takato yamamoto rogner5th on deviantART Intricately Patterned Animal Illustrations It would be hard to tell from these strikingly detailed animals but artist Iain Macarthur got his start drawing cartoon characters. Now he carries his sketchbook on the bus, to the cafe and everywhere else as he includes more realism and in this case pattern in his illustrations. See more of his animals (and even some cartoons) at iainmacarthur.carbonmade.com. See Also INCREDIBLE 3D ILLUSTRATIONS JUMP OUT OF THE SKETCHBOOK Via: hypemuch.com Known in some circles as the most amazing man in the universe, he once saved an entire family of muskrats from a sinking, fire engulfed steamboat while recovering from two broken arms relating to a botched no-chute wingsuit landing in North Korea. Promoted Content

Gerald Parel Art Mess The Art of Jeremy Fish When I opened few weeks back a National Geographic, I found an amazing shot of this animal. Because of its appearance and what I read about it next, I decided to make my own “water bear”Water Bear - aka “Tardigrade” - is an amazing micro-animal. One of the real superhero on earth.According to Wikipedia, “Tardigrades can withstand temperatures from just above absolute zero to well above the boiling point of water, pressures about six times greater than those found in the deepest ocean trenches, ionizing radiation at doses hundreds of times higher than the lethal dose for a human, and the vacuum of outer space. They can go without food or water for more than 10 years, drying out to the point where they are 3% or less water, only to rehydrate, forage, and reproduce”.Softs : Cinema 4D, Vray, Zbrush, Photoshop

Explosions of Color from a Chinese Artist Hua Tunan is a rising artist in China. Combining the traditional elements of Chinese art and culture with a modern twist, Hua brings about beautiful explosions on the canvas. Based out of Foshan, Hua (also known as 画图男) does performance and street art in addition to his paintings. His work has gathered the attention of companies such as Volvo, who flew him out to Zurich to do graffiti art on one of their blank cars for a performance. ↬ neochaEDGE