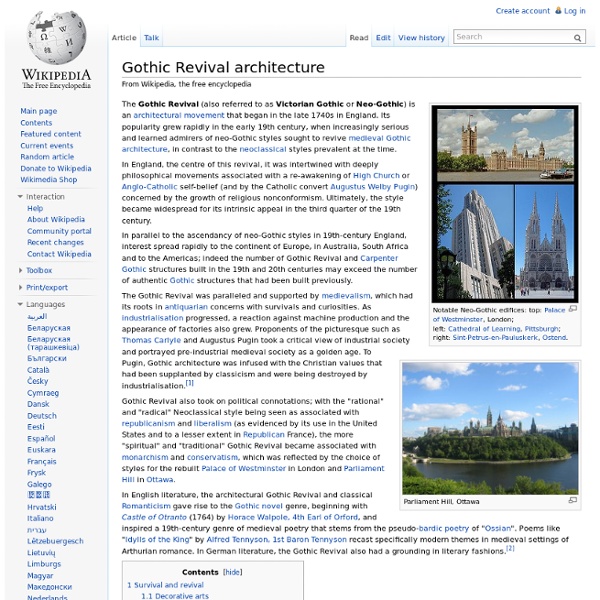 Gothic Revival (also referred to as Victorian Gothic, Neo-Gothic or Jigsaw Gothic, and when used for school, college, and university buildings as Collegiate Gothic) is an architectural movement that began in the late 1740s in England. Its popularity grew rapidly in the early 19th century, when increasingly serious and learned admirers of neo-Gothic styles sought to revive medieval Gothic architecture, in contrast to the neoclassical styles prevalent at the time. Gothic Revival architecture often has certain features,derived from the original Gothic architecture style, including decorative patterns, finals, scalloping, lancet windows, hood moldings and label stops. Relation to other cultural movements[edit] The Gothic Revival was paralleled and supported by "medievalism", which had its roots in "antiquarian' concerns with survivals and curiosities. Survival and revival[edit] A younger generation, taking Gothic architecture more seriously, provided the readership for J.

Interactive Architecture - Design and Modern Architecture Henry Holland (architect) Henry Holland (20 July 1745[1] – 17 June 1806) was an architect to the English nobility. Born in Fulham, London, his father also Henry ran a building firm[2] and he built several of Capability Brown's buildings, although Henry would have learnt a lot from his father about the practicalities of construction it was under Brown that he would learn about architectural design, they formed a partnership in 1771. He married Brown's daughter Bridget on 11 February 1773 at St George's, Hanover Square.[3] In 1772 Sir John Soane[4] joined Holland's practice in order to further his education, Soane left in 1778 to study in Rome. Holland paid a visit to Paris in 1787[5] this is thought to have been in connection with his design of the interiors at Carlton House, from this moment on his interior work owed less to the Adam style and more to contemporary French taste. Holland was a founder member in 1791 of the Architects' Club,[6] which included Thomas Hardwick as a signtory. Claremont House, c.1771

Edible Geography Dan Hogman | Architecture, Photography and Cooking/Sailing/Paragliding Tips. architecture: Green Living Things to consider when choosing green building materials If you are looking to play your part to sustain the environment, there are many eco-friendly materials available in the market. However, no matter what they say or profess to be made of, you take the final discretion whether the products are green or not. Many goods are sold as green products; however, upon reading the reviews from people, you understand that those were only false promises. Read more... Categories: Architecture Tags: account, building materials, choosing, consider, engineering, environment, featured, goods, Green, material, products, Top Does green construction really help in improving the environment The Green construction aims at efficient use of resources to create healthier and energy efficient homes. Read more... Categories: Architecture Tags: buildings, Construction, disposal, energy consumption, featured, higher perceived, improving, reduction, the environment, Top Read more... Read more... Read more...

Azusa Street Revival The Azusa Street Revival was a historic Pentecostal revival meeting that took place in Los Angeles, California and is the origin of the Pentecostal movement.[1] It was led by William J. Seymour, an African American preacher. It began with a meeting on April 9, 1906, and continued until roughly 1915. Background[edit] Los Angeles[edit] In 1905, William J. North Bonnie Brae Street[edit] Seymour and his wife, Jennie. Seymour and his small group of new followers soon relocated to the home of Richard and Ruth Asberry at 214 North Bonnie Brae Street.[6] White families from local holiness churches began to attend as well. The Asberry home on 214 North Bonnie Brae Street. News of the events at North Bonnie Brae St. quickly circulated among the African American, Latino and White residents of the city, and for several nights, various speakers would preach to the crowds of curious and interested onlookers from the front porch of the Asberry home. They shouted three days and three nights. Beliefs[edit]