Sensibilities - Myths and Legends of Russia: the Illustrations 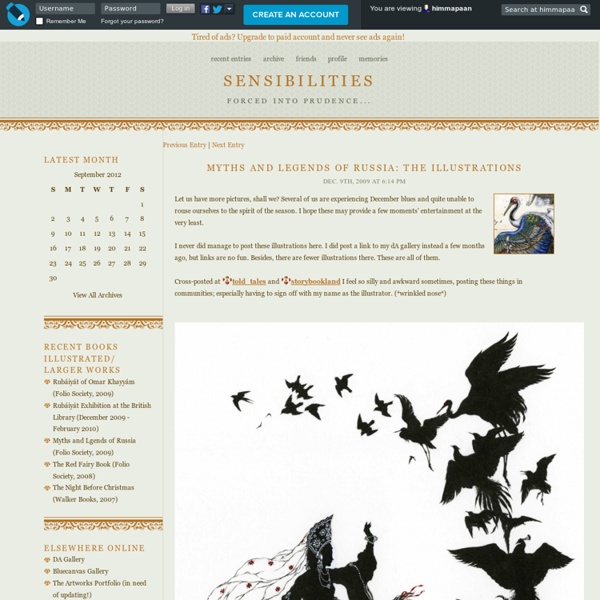 Let us have more pictures, shall we? Several of us are experiencing December blues and quite unable to rouse ourselves to the spirit of the season. I hope these may provide a few moments' entertainment at the very least. I never did manage to post these illustrations here. Cross-posted at told_tales and storybookland I feel so silly and awkward sometimes, posting these things in communities; especially having to sign off with my name as the illustrator. 'She waved her right hand, and lakes and woods appeared; she waved her left hand, and various birds began to fly about'Illustration for The Frog Princess. 'I'm Rumbling Thunder! 'Ivashko too walked and walked, and met the three-headed dragon'Illustration for The Three Kingdoms. ‘The fox is carrying me away … Cat Cotonaevich, rescue me!’ Unlike that tale, however, in which Chanticleer manages to outwit the fox in the end, this one does not end happily for the cock. This is one of two of the earliest illustrations which I completed.

Apocalyptic Sculptures by Kris Kuksi Kris Kuksi is a 36-year-old sculptor from Missouri, USA. His sculptures are created out of discarded toys, old mechanical parts and other tossed away items. The sheer amount of detail within is work is truly incredible. According to Kuksi’s artist statement, his work is “feeling that he has always belonged to the ‘Old World’. In any case, Kuksi’s mindblowingly detailed toy sculptures remind us that trash and discarded materials can be refashioned into nearly anything we want. The Definitive Hyper Realistic Pokemon Collection Not too long ago, I saw a post of several pictures in which Pokemon were depicated in a “hyper realistic” manner. This is nothing new, but I couldn’t help but want more. I had to, as I do with many things, take it to the extreme. I needed a comprehensive, definitive page to always look back on; and what better place than our very own Triggerplug. The first artist up to bat is Arvalis from Deviant art. Second Artist on the list is Nauvasca, in comparison to Arvalis, her works may seem less eye catching, but I still find them to be a treasure. Next to bat is an artist known as JollyPiik. Like this: Like Loading...

somefield escape into life Video: H.R. Giger x Pioneer ::: Pink Tentacle 19 Mar 2010 + Video A monster designed by H.R. Giger starred in a 1985 Japanese commercial for the Zone home entertainment system by Pioneer. The biomechanical beast -- which was also featured in a series of print ads that ran at the same time -- appears to be based on illustrations Giger made for underground filmmaker Alejandro Jodorowsky's screen adaptation of "Dune," which never made it to production. H.R. H.R. [Images via The Dark Portal of Art]

The Awesome Environments Of Zhichao Cai Art director Zhichao Cai (aka Trylea) uses no tricks or photocomping in his amazing, ridiculously vertical compositions, featuring incredibly pushes perspectives, impossible architecture and a plethora of detail to scour for in his incredible digital painted illustrations. As an art director at the Hangzhou, China based Gamecox, his emphasis is on creating striking worlds via his knack for environment painting, which he's really damn good at. Zhichao uses personal narratives to give thematic direction to his pieces, including crafting lore including projects like his personal set of paintings titled Legend Of Yunzhong, featuring five kingdoms based off of 5 elemental powers (All after the break).

Guess What You Will Get if You Connect This Dots - Lazy Palace September 27, 2010 / Fun / 2 comments This was popular once, even now children like to connect dots and see what kind of the picture will they got. This is how it looks like when you give a dot art to someone who is a little bit older with a little bit of dirty mind. It is interesting to see what a simple picture makes someone to think of. i had some laugh, thought it would be nice to share with you this.

sylvia The Fantastic Imagination of Illustrator Simón Prades Simón Prades, born in 1985 into a german/spanish family, is living in Saarbrücken, Germany. Since finishing University with a diploma in Graphic Design, he is working as a freelance illustrator for clients in Editorial, Advertising and Film while teaching drawing and illustration at the university of applied siences in Trier, Germany. More stuff you’ll like www.inspiration-now.com