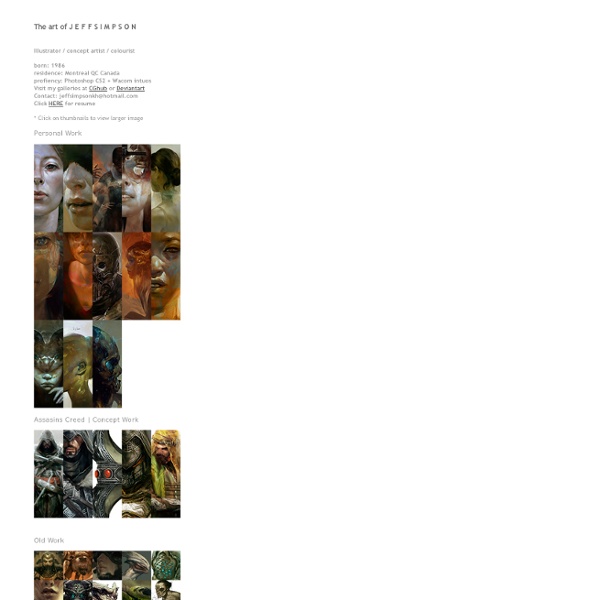 Jenny Saville JENNY SAVILLE The Mothers, 2011 Oil on canvas 106 5/16 x 86 5/8 inches (270 x 220 cm) Jenny Saville was born in Cambridge, England in 1970. In 1990, midway through her BA course at the Glasgow School of Art, Jenny Saville exhibited in Contemporary '90 at the Royal College of Art. In 1992 she completed her degree as well as showing in Edinburgh and in Critics Choice at the Cooling Gallery, London. Following the success of her show at the Saatchi Gallery in 1994, which generated a great deal of publicity for her work (the images were ubiquitous that year), Saville went on to take part in the exhibition American Passion, which toured from the McLellan Gallery, Glasgow, to the Royal College of Art and the Yale Center for British Art in New Haven, Connecticut.

Greg Broadmore - Home Welcome to the website of artist, writer and friend to robots, Greg Broadmore. During the day he works as an illustrator, writer and conceptual designer for Weta Workshop and has designed for the motion pictures: District 9, King Kong, The Lion, the Witch and the Wardrobe, and Black Sheep amongst many, many others. Through Weta Workshop, he is the creator and designer of Dr. Massive Black : Illustration 1 2 3 4 5 6 7 8 9 10 Next Page Martin Wittig Well, I am finally back from my Greece/ Russia trip. I had an AWESOME time!!! Greece was just plain beautiful, and Russia was exciting as well. Yuta Onoda elephant art Here are some examples of elephants used in movies that you never even knew were there. The Bantha wich appeared in the first Star Wars movie, A New Hope, was played by an female Asian elephant in a large custom made costume. However, during shooting the elephant would frequently take off the costume because it wasn't accustom to the extra warmth generated from wearing it in the California heat. The same elephant was used as reference by ILM when they were working out the locomotion of the Imperial walkers.

Jerome Lagarrigue 70% EtOH An older Eren and Jean I drew a while back, I am still pretty fond of it. (Sorry for cross post!) thank you everyone for your overwhelming support for Nameless & the Scientist book 1! Snakes, Hawks &Tigers by Horimouja Snake, Hebi They are said to have supernatural abilities, such as protection against illness, disaster, bad fortune and like the dragon can bring rain. Snakes have the ability to transform themselves into human forms, usually that of a vengeful, jealous or wronged woman. One of the best stories of this transformation is in the tragic story of Kiyoshime and the priest Anchin. Not all Snake myths are bad, many shop owners have the image, of a snake, coiled around a mallet hanging near the entrance, this is to bring good fortune and prosperity.

Sketch Of The Day The recording of yesterday’s livestream is now on youtube if you missed it. Check out my channel to see previous recordings as well :) I won’t be doing a normal stream next weekend due to the Ludum Dare game jam, which I’ll be participating in. I may end up streaming some of my work during the jam, but we’ll see how it goes! I am now live on justin.tv, doing some painting and talking to the chat! Come say hello and hang out for a while :)