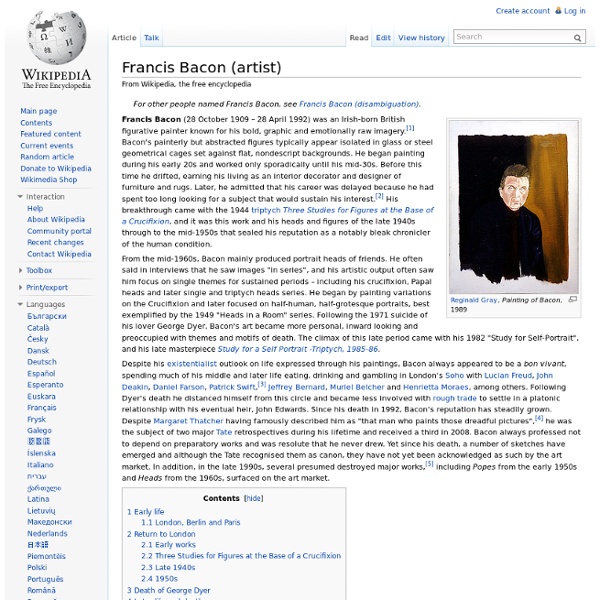 Francis Bacon in his studio Francis Bacon (28 October 1909 – 28 April 1992) was an Irish-born British figurative painter known for his bold, graphic and emotionally raw imagery.[1] His painterly but abstracted figures typically appear isolated in glass or steel geometrical cages set against flat, nondescript backgrounds. Bacon began painting during his early 20s and worked only sporadically until his mid-30s. Unsure of his ability as a painter, he drifted and earned his living as an interior decorator and designer of furniture and rugs. He often said in interviews that he saw images "in series", and his artistic output typically focused on a single subject or format for sustained periods. During his lifetime, Bacon was equally reviled and acclaimed. Bacon's birthplace at 63 Lower Baggot Street, Dublin He had an older brother, Harley, five years his senior,[11] two younger sisters, Ianthe and Winifred, and a younger brother, Edward. On 1 June 1940 Bacon's father died.

Digital Artist and Animator | Roy Nottage Satsumabug&#039;s art blog Arts: Green Living Recycle plastic for environment, Richmond Arts Center shows the way For long plastic bags and bottles have been our great friends in daily life, mindless of all the hazardous effect that plastic has on environment. But, the thought of a life without plastic seems to be grueling, as there is no other cheaper way to get out of the mire. Also, discarding plastic waste in open is extra perilous for the environment. The kids at the Visual Arts Center of Richmond have shown us the way to a cleaner environment. In today’s world, the job that we are best at handling is spoiling the sacred, serene environment. Source: Bottlebug Enjoyed this post? Categories: Uncategorized Tags: