Nenuno creative - digital design blog with a touch of creativity! 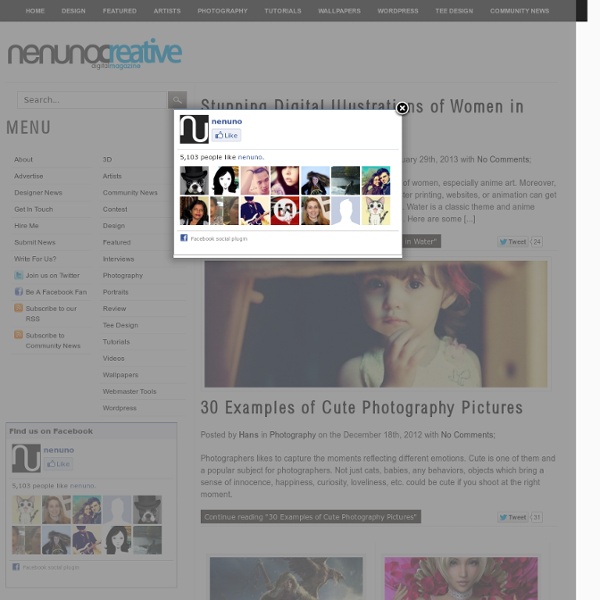 Anthony Gormley Early life[edit] The youngest of seven children born to a German mother and an Irish father,[1] Gormley grew up in a wealthy Roman Catholic[2] family living in Dewsbury Moor, West Yorkshire.[1] He attended Ampleforth College, a Benedictine boarding school in Yorkshire,[1] before reading archaeology, anthropology and the history of art at Trinity College, Cambridge, from 1968 to 1971.[1] He travelled to India and Sri Lanka to learn more about Buddhism between 1971 and 1974.[1] After attending Saint Martin's School of Art and Goldsmiths in London from 1974, he completed his studies with a postgraduate course in sculpture at the Slade School of Fine Art, University College, London, between 1977 and 1979. Career[edit] Gormley's career began with a solo exhibition at the Whitechapel Art Gallery in 1981. Almost all his work takes the human body as its subject, with his own body used in many works as the basis for metal casts. Recognition[edit] Art market[edit] Major works[edit] References[edit]

Pietà (Michelangelo) Detail of Mary The structure is pyramidal, and the vertex coincides with Mary's head. The statue widens progressively down the drapery of Mary's dress, to the base, the rock of Golgotha. The marks of the Crucifixion are limited to very small nail marks and an indication of the wound in Jesus' side. The Madonna is represented as being very young for the mother of a 33 year old son, which is not uncommon in depictions of her at the time of the Passion of Christ. Do you not know that chaste women stay fresh much more than those who are not chaste? Another explanation suggests that Michelangelo's treatment of the subject was influenced by his passion for Dante's Divina Commedia: so well-acquainted was he with the work that when he went to Bologna he paid for hospitality by reciting verses from it. While there was a precedent for painted depictions of Mary grieving over the dead Christ in Florentine art, the subject appears to have been novel to Italian sculpture. Pope-Hennessy, John (1996).

Neo Gothic Gothic Revival (also referred to as Victorian Gothic, Neo-Gothic or Jigsaw Gothic, and when used for school, college, and university buildings as Collegiate Gothic) is an architectural movement that began in the late 1740s in England. Its popularity grew rapidly in the early 19th century, when increasingly serious and learned admirers of neo-Gothic styles sought to revive medieval Gothic architecture, in contrast to the neoclassical styles prevalent at the time. Gothic Revival architecture often has certain features,derived from the original Gothic architecture style, including decorative patterns, finals, scalloping, lancet windows, hood moldings and label stops. Relation to other cultural movements[edit] The Gothic Revival was paralleled and supported by "medievalism", which had its roots in "antiquarian' concerns with survivals and curiosities. Survival and revival[edit] A younger generation, taking Gothic architecture more seriously, provided the readership for J.

Monster-Munch The History of Visual Communication This website, which contains the material of the course VA312, taught at Sabanci University, Istanbul, Turkey; attempts to walk you through the long and diverse history of a particular aspect of human endeavour: The translation of ideas, stories and concepts that are largely textual and/or word based into a visual format, i.e. visual communication. Wikipedia defines visual communication as: The primary tool by which man has visualised ideas is through the usage of writing and, by extension, type: Writing/type is the visual manifestation of the spoken word. I shall loosely be following P.B. I am very proud of my heritage as a graphic designer.

Arts On Earth - Best Pics of Nature, Environment and Technology Sweet Station Zemer Peled Peled was born and raised in a Kibbutz in the northern part of Israel. After completing a BA (Hons) at the Bezalel Academy of Art and Design in Jerusalem she graduated with an MA (Hons) from the Royal College of Art. Peter Harris ” In the decade that I’ve painted the urban landscape, one name is consistently mentioned when people first encounter my work: Edward Hopper. Philippe Tyberghien ” I am a Franco/Belgian artist who works in photography and makes them look like old paintings (old or less). Mi Ju ” My work is an improvisation in liminality: between dream and concretized, ancient and contemporary, Korea and the West, ephemeral and eternal, the uncensored and codified. Christophe Jacrot Christophe Jacrot is a French director and photographer who has developed an art project on the bad weather in major cities. Henn Kim Go check out the online portfolio of the wonderfully talented Henn Kim. Ken Lavey Tim Hawkinson Tadas Cerniauskas Carrie Ann Baade

Christopher Kim &quot; The world in my eyes as I see it. LUCK – AN NYC Marriage Proposal’s back! After 9 long months of this video being private. I guess it got overwhelming popular that they password … Grace & Jay Engaged Teaser! Grace & Jay Engaged Teaser! A picture we took on Saturday with one of my couples Grace and Jay for their engagement photos! Jen+Joe Engaged! Jen+Joe Engaged! Jen & Joe I say it now, as I always believed, Trust is everything and it will always show in the pictures. Marc + Eiffel Save the Date Session Marc + Eiffel Save the Date Session Long time friend and wedding photography mentor asked me to shoot his engagement/save the date photos. Save the Date Save the Date So this post is dedicated to my new friend Hanna who helped/assisted me with lighting last night with her friends Jen & Joe’s engagement shoot … Paul Carlin Trash the Dress Paul Carlin Trash the Dress Paul and Carlin commissioned me to do a trash the dress shoot for them to add to their wedding pictures. Photo of the day Photo of the day I’m awesome like them

Alex Mathers Illustration RINZE VAN BRUG - PHOTOGRAPHY Amazing Pictures, Photography, Travel and Tourism Markus Lanser Website - Tutorials - Cinema 4D - Low Poly Human Body Modeling Modeling a Human Body is one of the most interesting Tasks in 3D Modeling. But it's also one of the most difficult Things to do if you also want to get a detailed Head. This Tutorial is not about Creating a highly detailed Human that you can put in a Real-Life Scene. This is rather about Creating a Human in an easy and fast Way. It's about giving you a Start on the Basics for Human Body Modeling. We're gonna use a Picture as a Pattern to create one Half of the Body, then use a Symmetry Object to add the other Half of the Body and put everything into a Hypernurbs Object. At first we need a Picture of a Human, preferably a Drawing. The Picture should consist of a Front and a Side View of the Body. In Cinema 4D, create 2 new Materials. Now create two Polygons. Now You need to turn the Polygon with the Side Picture to H=90°. Until we can use our Pattern to work from, we need to move the Front a little Bit that it's Center matches the Origin of our Coordinate System. Continue to Part 2

Art Tutorial The second bit of advice a beginning artist usually gets is “draw from life”. And it is excellent advice! After all, if you can't draw what is right in front of you, you certainly won't be able to draw what you see in your imagination either. But the advice is a bit short, and will usually leave the artist behind unsure of what to do next. Materials? Figure 1.1. So... a ream of the cheapest copier paper you can find, or in a pinch, the inside of a pizza box. The most important thing to keep in mind is to start with the largest shapes, and gradually work down to the small details. The best way to explain this is by example. The first step is to block in the large shapes. Figure 1.3. Now pause and check if everything is still correct. The proportions are okay: the line through the eyes is supposed to be a bit below halfway (say, at 5/8ths) the lines of the ear tips and the chin. Figure 1.4. Eyeballing diagonal lines through your figure is called “caliper vision” by [Ryd]. Figure 1.5.