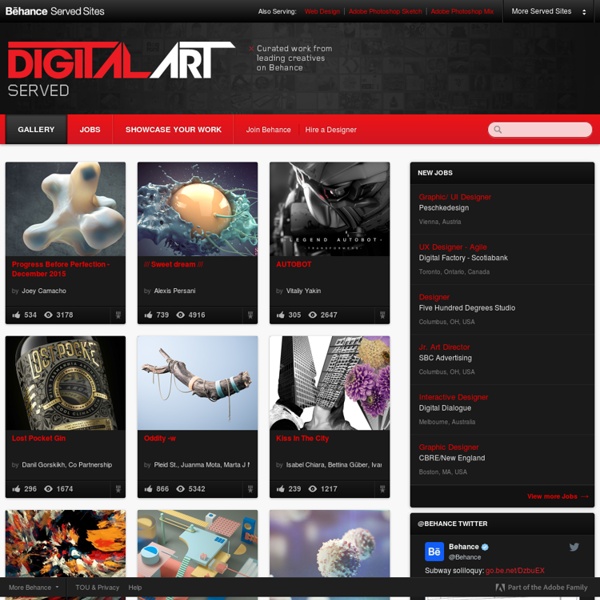 Michael Tittel: Behavior This week we are sharing work submitted to Lenscratch… It does not happen often, but every now and then I will catch someone sneaking a candid of me in public. It is the photographer in me that relates to the strides taken for the perfect image, and because of this I always pretend I cannot see them. TUTORIAL: Cleaning up drawings on lined paper Removing blue lines from your drawings Skill Level: Easy What you need: Your image, scanned in & ready Photoshop CS (other versions should be similar) Welcome to the first tutorial

Jonathan M. Foerster — At Least We Dream Indianapolis, IN I have found comfort and serenity in escapism through different mediums ever since I can remember. Always to be a recluse, quiet and in the constant realms of my head. These realms build upon love, fear, death, life and lust that I cannot render through words. My interpretations are of only mere sketches to what I cannot describe inside me. Graphix1 - Part 12 In searching for these outstanding photographs, I came to the conclusion that photographing mountains is not as easy as it may first appear – I honestly thought I would struggle to decide which great photos to leave out of this list – instead, it took an age to source these beautiful images. A Google search for the reasons returned an article by Darwin Wiggett, who states: “Of all the landscapes I have photographed, mountains remain one of the most difficult to capture well.” The reason for this, according to Wiggett is that light is the only tool for capturing a shot of a mountain, and to get a great shot you have to consider the three main categories of light: Light Quality, Light Direction and Light Temperature.

Brittney Lee Designer, Illustrator and Animator Brittney Lee creates the kind of charming and effervescent characters that can leap to life in a very wide variety of applications; from traditional animation, CG animation, book and stationary illustration to stunning fine art cut paper sculptures. Lee's design, draftsmanship and color acumen are particularly evident when her characters are found inhabiting an environment that she has created especially for them. Tendrils of hair play off gracefully winding vines, cascades of water dance around lush curvilinear vegetation, warm sunlight bathes elegant Parisian courtyards. Despite the skillful simplicity her design, the viewer is tempted to linger, not wishing to leave Lee's enchanting worlds too soon. You can witness Brittney Lee's amazing five year artistic evolution on her blog.

Showcase Elsewhere by Von | New solo show at KK Outlet Gallery, London | 1.5.14 — 31.5.14 I'm very pleased to announce my forthcoming solo show "Elsewhere" at London's KK Outlet Gallery in Shoreditch. The show will consist of all new work and have both originals and prints available for sale. Four collaborative exhibition posters have been created especially for the show with some of my favourite designers — Hort, Non-Format, David Pearson and Darren Firth (whose poster is above). Leading up to the show these will be released as hand pulled screen prints in a strict edition of 20. 40+ Cartoon Character Illustration Tutorials Advertisement Everybody likes cartoon characters. They make us happy and keep our mind tension-free. Contemporary Photography I made this series with the desire to build a set of symbolic portraits inspired by my background of double cultures. I'm French with Middle Eastern origins. I worked by using the pictorial tradition of still lives. I chose to put forward characters where the nature and objects they carry come from different rites and customs. The photographs can be grouped into three metaphorical categories:

Disney's "Tangled" Character Design Development. Once "Rapunzel", then "Rapunzel Unbraided", and now "Tangled", Disney's 50th animated Feature film, set for release November 28th, has gone through many changes throughout it's years in development. One thing that hasn't changed much, though, is the artistic influence of two artists in particular. One was the French Rococo painter Jean-Honorer Fragonard, specifically one of his best known works; “The Swing” which inspired the lush fairy tale world that Rapunzel inhabits. The second is animation legend Glen Keane, who was the original driving force behind the film. Glen's masterfully solid, appealing, expressive and passionate animation and drawings are admired across the globe. He is currently being honored with a gallery exhibit in Paris and is touring with a retrospective of Disney Art in Australia.

3D Interpretations of Real People, by Michael O. – with Exclusive Interview Today, PxlEyes has the great pleasure of interviewing a professional digital artist: Michael O. He has given an exclusive interview for us and our readers, which will inspire many other artists. Along the way, we also present a showcase of his brilliant work. He has the unique talent of making ultra-realistic 3D interpretations of people. Features « Paper Journal Features Martin Kollar – Nothing Special Pierre Le Hors Curtis Hamilton: Taken as Given