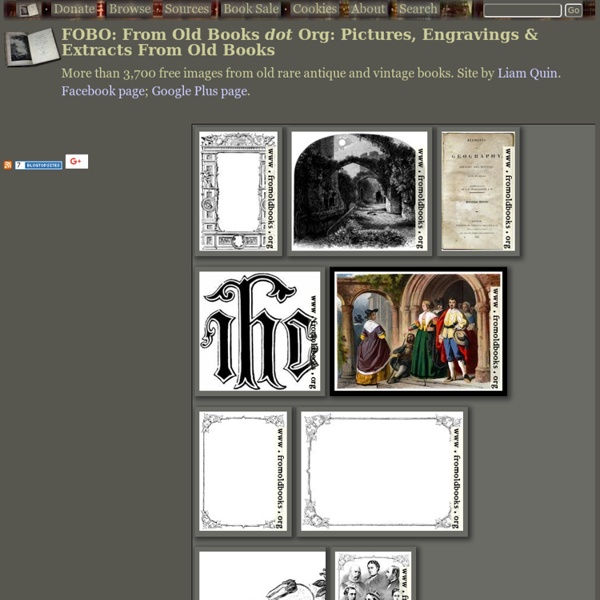 Patterns Download Download Download High-Res Public Domain Children’s Images — Public Domain High Resolution Images “Imagine yourselves, my dear readers, seated on a wild winter night in a Silesian hut in the Riesengebirge, several thousand feet higher than the surrounding valleys, with snow, fathoms deep, everywhere. The wild storm rages through the desolate mountains. Within, however, everything is warm and comfortable, and as the matrons and maidens busily spin, in fancy, you can listen with pleasure to their tales of the mighty Mountain Lord.” How’s that for a set up?

Secret Belgian Binding Instructions The Secret Belgian Binding These instructions show you how to bind a book with an interesting pattern of weaving which laces the front and back covers to the spine. Included is the sewing of the text block (a set of four signatures) which is attached to the inside spine of the cover. Mandaic alphabet and language The Mandaic alphabet appears to be based on the Aramaic alphabet and first appeared sometime during the 2nd century AD. The Mandaic name for the alphabet is Abagada or Abaga, after the first few letters. The Mandaeans believe that all the letters of their alphabet have magical properties, and impart mysteries (raze). Notable features 40+ Various High Quality Free Paper Patterns and Textures Resources September 2, 2010 Paper will never leave our lives, no matter how digitized we get. Its potential for beauty is celebrated in many designs today, whether in textures, layers, or other additional effects. These following paper textures and patterns range from the simple to the exquisite, from the crumpled and colored to the wrinkled, faded and nostalgic. Download as many of them as you wish, and we hope you are able to use them in some beautiful paper-inspired designs! Crumpled Paper Texture for Layers

Theban alphabet The origins of the Theban alphabet are lost in the mists of time. It is often called "The Runes of Honorius" after its reputed inventor, Honorius of Thebes. It is also known as the 'Witch's Alphabet'. Passing the River Font The Passing the River or Passage du Fleuve alphabet is derived from the Hebrew alphabet and was created by Heinrich Cornelius Agrippa during the 16th Century. Notable features Type of writing system: abjad Direction of writing: left to right in horizontal lines

Collection of Over 850 Great Free Photoshop Styles To Download Posted on by bmackler in Photoshop, Resources Layer Styles are one of the often forgotten “extras” of Photoshop that can really help streamline your work flow. Sitting there waiting for you to use them.