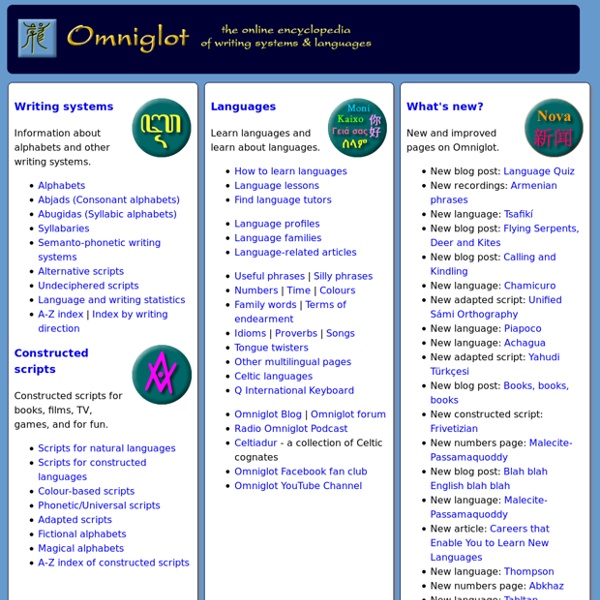 Avestan alphabet and language The Avestan alphabet was created in the 3rd and 4th centuries AD for writing the hymns of Zarathustra (a.k.a Zoroaster), the Avesta. Many of the letters are derived from the old Pahlavi alphabet of Persia, which itself was derived from the Aramaic alphabet. Greek influence, in the form of the full representation of vowel sounds, is also present. These Maps Divide the World into Four Income Groups The Global Finance Magazine recently released an article comparing countries by income across the world for 2015, sourcing data from the World Bank. Gross National Income (GNI) per capita is the final income earned by a country’s residents divided by the total population. Countries are divided into 4 different groups: Group 1 - Low income: $1,045 or less Group 2 - Lower middle income: $1,046 to $4,125 Group 3 - Upper middle income: $4,126 to $12,745 Group 4 - High income: $12,746 or more Based on the data of 204 countries, below is a breakdown of the number of countries that fall within each of the 4 income groups listed above. Group 1 - Low income: 17% Group 2 - Lower middle income: 25% Group 3 - Upper middle income: 26% Group 4 - High income: 32%

Orok people - WikiVisually Etymology[edit] The name Orok is believed to derive from the exonym Oro given by a Tungusic group meaning "a domestic reindeer". The Orok self-designation endonym is Ul'ta, probably from the root Ula (meaning "domestic reindeer" in Orok). Another self-designation is Nani.[2] Occasionally, the Oroks, as well as the Orochs and Udege, are erroneously called Orochons.

Easy Way Language Centre's map reveals how words have evolved across the continents The map was created by Brazil-based Easy Way Language Centre and shows the official languages of countriesType a word in any language into Word Map to hear it being translated globally in these official languagesAs the words are mapped globally, lines connect all the countries with a common languageThese lines in turn reveal how language has spread with migration and colonisation Clicking a word reveals more about that particular language, and how many countries share the translation By Victoria Woollaston for MailOnline Published: 10:29 GMT, 30 January 2015 | Updated: 12:51 GMT, 30 January 2015 There are said to be around 6,500 spoken languages around the world.

18 Great Sites to Learn a New Language Advertisement In Hitchhiker’s Guide To The Galaxy, interstellar travelers had a little fish, called a Babelfish, that they could slip into their ear and make them instantly literate in any language. We normal, boring humans, however, do not have this luxury, which is why we must rely on the internet. Although there are endless resources to learn languages on the web, it is often difficult to find quality websites that offer structured lesson plans for free. I, however, have scrounged the murky depths of the web to bring you the following, resource-packed sites; may they be the Babelfish for your future forays.

Armenian alphabet, language and pronunciation Armenian is an Indo-European language with about 6 million speakers mainly in Armenia (Հայաստան [Hayastan]) and Nagorno-Karabakh, a de facto, though unrecognised, independent republic in the Nagorno-Karabakh region of the South Caucasus. There are also Armenian speakers in many other countries, including Russia, Georgia, Lebanon, Iran, Syria, Turkey, Egypt and the USA. Armenian is the offical language of Armenia and Nagorno-Karabakh, and has official status as a minority language in Cyprus, Poland and Romania. Until the the early 1990s schools in Armenian taught in either Armenian or Russian, however after the collapse of the USSR, Armenian became the main medium of instruction and the Russian-medium schools were closed. In 2010 Russian language education was reintroduced in Armenia [source].

Mexico - Geert Hofstede If we explore Mexican culture through the lens of the 6-D Model©, we can get a good overview of the deep drivers of Mexican culture relative to other world cultures. Power DistanceThis dimension deals with the fact that all individuals in societies are not equal – it expresses the attitude of the culture towards these inequalities amongst us. Power Distance is defined as the extent to which the less powerful members of institutions and organisations within a country expect and accept that power is distributed unequally.

Phrasebooks – Travel guide at Wikivoyage This page lists the foreign language phrasebooks currently available on Wikivoyage. For more general information on language and travel, see Talk. These phrasebooks are not language tutorials, comprehensive grammars, or dictionaries. Amharic alphabet, pronunciation and language Amharic is a Semitic language and the national language of Ethiopia (ኢትዮጵያ). The majority of the 25 million or so speakers of Amharic can be found in Ethiopia, but there are also speakers in a number of other countries, particularly Eritrea (ኤርትራ), Canada, the USA and Sweden. The name Amharic (ኣማርኛ - amarəñña) comes from the district of Amhara (አማራ) in nortern Ethiopia, which is thought to be the historic centre of the language. Writing system