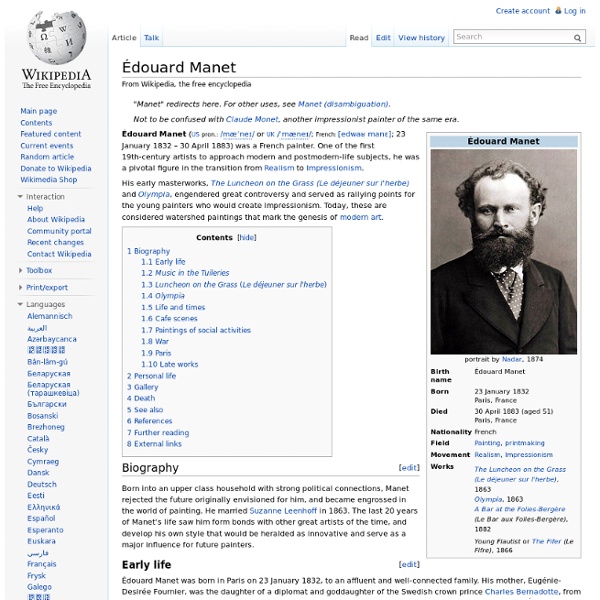 Biography[edit] Born into an upper class household with strong political connections, Manet rejected the future originally envisioned for him, and became engrossed in the world of painting. He married Suzanne Leenhoff in 1863. The last 20 years of Manet's life saw him form bonds with other great artists of the time, and develop his own style that would be heralded as innovative and serve as a major influence for future painters. Early life[edit] Édouard Manet was born in Paris on 23 January 1832, in the ancestral hôtel particulier (mansion) on the rue Bonaparte[citation needed] to an affluent and well-connected family. At his father's suggestion, in 1848 he sailed on a training vessel to Rio de Janeiro. From 1853 to 1856 he visited Germany, Italy, and the Netherlands, during which time he was influenced by the Dutch painter Frans Hals, and the Spanish artists Diego Velázquez and Francisco José de Goya. Music in the Tuileries[edit] Luncheon on the Grass (Le déjeuner sur l'herbe)[edit]

Authors Toni Morrison is a prominent American author who was awarded the Nobel Prize in Literature in 1993 for her vivid representation of American culture, particularly the cultures of African Americans. Authors often have both political and social impacts through their works, placing their work into the public sphere as a testament to their ideas. An author is broadly defined as "the person who originated or gave existence to anything" and whose authorship determines responsibility for what was created. Narrowly defined, an author is the originator of any written work and can also be described as a writer.[1] Author of a written or legally copied work[edit] Legal significance[edit] In copyright law, there is a necessity for little flexibility as to what constitutes authorship. Questions arise as to the application of copyright law. Literary significance[edit] Mark Twain was a prominent American author in multiple genres including fiction and journalism during the 19th century. Compensation[edit]

Céline in a rare photograph - Louis Ferdinand Céline en photo Samedi 21 janvier 6 21 /01 /Jan 00:32 Louis Ferdinand Céline (right) 1943 with the writer Rene d'Ueckermann from Paris , as guest during a reception at the Jaeckelsbruch Castle of Arno Breker in . This photograph was discovered in January, 2004. Paris/Berlin (bpb) Louis Ferdinand Céline is one of the most popular French writers of the 20th century. His books are a must for the upper class and are very popular among the students of our time in . Accused of collaboration, Céline fled (1944) to live in at Sigmaringen and then moved (1945) to . Partager l'article ! inShare Par Bardamu - Publié dans : louisferdinandceline 5