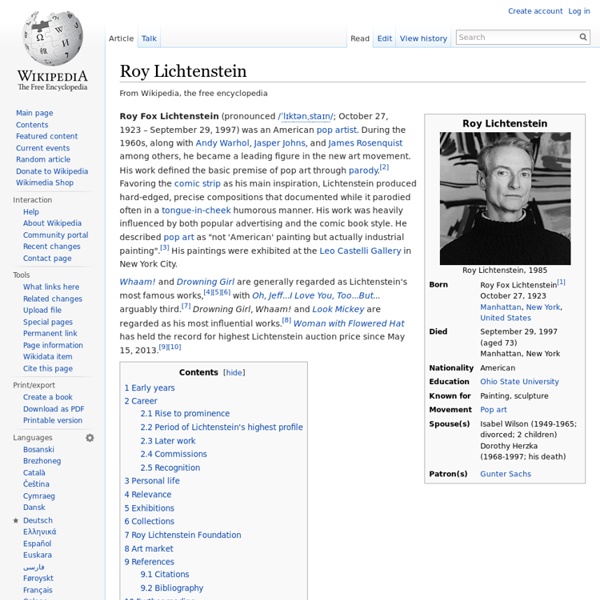 Roy Fox Lichtenstein (pronounced /ˈlɪktənˌstaɪn/; October 27, 1923 – September 29, 1997) was an American pop artist. During the 1960s, along with Andy Warhol, Jasper Johns, and James Rosenquist among others, he became a leading figure in the new art movement. His work defined the basic premise of pop art through parody.[2] Favoring the comic strip as his main inspiration, Lichtenstein produced hard-edged, precise compositions that documented while it parodied often in a tongue-in-cheek humorous manner. His work was heavily influenced by both popular advertising and the comic book style. He described pop art as "not 'American' painting but actually industrial painting".[3] His paintings were exhibited at the Leo Castelli Gallery in New York City. Whaam! Early years[edit] Career[edit] Cap de Barcelona, sculpture, mixed media, Barcelona Lichtenstein entered the graduate program at Ohio State and was hired as an art instructor, a post he held on and off for the next ten years. Later work[edit]

Analytics Analytics is the discovery and communication of meaningful patterns in data. Especially valuable in areas rich with recorded information, analytics relies on the simultaneous application of statistics, computer programming and operations research to quantify performance. Analytics often favors data visualization to communicate insight. Analytics vs. analysis[edit] Web analytics Web analytics is not just a tool for measuring web traffic but can be used as a tool for business and market research, and to assess and improve the effectiveness of a website. Web analytics applications can also help companies measure the results of traditional print or broadcast advertising campaigns. It helps one to estimate how traffic to a website changes after the launch of a new advertising campaign. Web analytics provides information about the number of visitors to a website and the number of page views.

Online advertising In 2011, Internet advertising revenues in the United States surpassed those of cable television and nearly exceeded those of broadcast television.[1]:19 In 2013, Internet advertising revenues in the United States totaled $42.8 billion, a 17% increase over the $36.57 billion in revenues in 2012.[2]:4–5 U.S. internet ad revenue hit a historic high of $20.1 billion for the first half of 2013, up 18% over the same period in 2012.[3] Online advertising is widely used across virtually all industry sectors.[1]:16 Many common online advertising practices are controversial and increasingly subject to regulation. Online ad revenues may not adequately replace other publishers' revenue streams. Declining ad revenue has led some publishers to hide their content behind paywalls.[4]

Display advertising Display advertising is a type of advertising that is located on websites. It can be seen in a wide range of different formats and contains items such as texts, images, flash, video and audio.[1] The main purpose is to deliver general advertisements and brand messages to the plus 40 million people connected to the Internet each month.[2] History[edit] Since the early 90’s the advent of the Internet has completely changed the way in which people relate to advertisements. Computers’ prices moved downward and the access to the online world became accessible to everyone.[3] This change has modified the way in which people tend to be informed, and the way in which they are exposed to media and advertising by creating different online channels through which advertisements can reach users.[4] The first type of relationship between a website and an advertiser was a straightforward, direct partnership.

Marketing Marketing is communicating the value of a product, service or brand to customers, for the purpose of promoting or selling that product, service, or brand. Marketing techniques include choosing target markets through market analysis and market segmentation, as well as understanding consumer behavior and advertising a product's value to the customer. From a societal point of view, marketing is the link between a society's material requirements and its economic patterns of response. Marketing satisfies these needs and wants through exchange processes and building long-term relationships. Marketing blends art and applied science (such as behavioural sciences) and makes use of information technology.

Social media Diagram depicting the many different types of social media Social media are computer-mediated tools that allow people to create, share or exchange information, ideas, and pictures/videos in virtual communities and networks. Social media is defined as "a group of Internet-based applications that build on the ideological and technological foundations of Web 2.0, and that allow the creation and exchange of user-generated content Twitscoop Twitscoop is a web-based Twitter client which uses the Twitter API to allow users to send and receive tweets, and do multiple real-time searches at the same time. Twitter client[edit] Twitscoop is a Twitter client and a real-time visualisation tool which enables users to mine the tweet stream.[2] Twitscoop's algorithm identifies tags and keywords in the Twitter stream and then ranks them by how frequently they appear versus normal usage. Twitscoop detects growing trends in real-time, identifies breaking news and then monitors specific keywords along with graphs that display the activity for any given word on Twitter. The results are also displayed in a tag-cloud, where the more popular tags are presented in a bigger font.[3] Twitscoop also provides an API for third-party applications, which is being used by TweetDeck for instance.

HootSuite Additional integrations are available via Hootsuite’s App Directory, including Instagram, MailChimp, Reddit, Storify, Tumblr, Vimeo and YouTube.[8] Based in Vancouver, British Columbia, Canada, Hootsuite has over 500 staff located in Vancouver, San Francisco, New York, Hong Kong, London, Sydney, Singapore, and other countries. The company operates on a freemium model and has over 10 million users in more than 175 countries.[5] §History[edit]