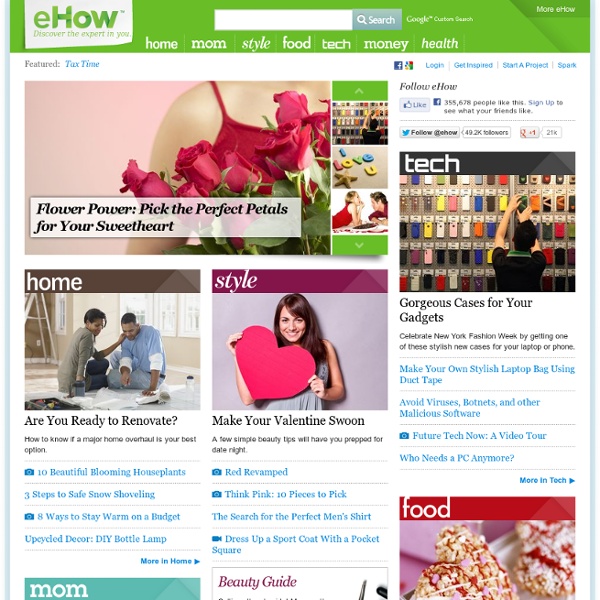 Great Smoky Mountains National Park - Waterfalls Mingo Falls is located just outside the park on the Cherokee Indian Reservation. Photo by Robert Crootof. Every year over 200,000 visitors hike well-worn trails to view Grotto, Laurel, Abrams, Rainbow, and other popular waterfalls in the park. Large waterfalls attract the crowds, but smaller cascades and falls can be found on nearly every river and stream in the park. The Great Smoky Mountains abound with the two ingredients essential for waterfalls-ample rainfall and an elevation gradient. In the Smokies high country, over 85" of rain falls on average each year. The following are brief descriptions of the Smokies most popular waterfalls.

DIY - Jersey Spaghetti Necklace Scarf - Retro Chick — Retro Chick Last week I wrote about the fabulous Kapow Wow Objects, and in particular my favourite piece the black spaghetti necklace. Sadly the chances of me having £120 to spend on a scarf are pretty small right now, so I decided to have a go at making one myself. At a Boot Fair this morning I spent the grand total of £2 on 4 black T Shirts (in the end I only used 3, so I could have saved myself 50p) I trawled trough the junk drawers in my house (and there are many) and found a selection of old key-rings to use as fastenings and I put down a sheet so I didn’t cover the floor in black fluff. Laying each T Shirt flat I cut along the bottom of each making jersey loops, which I then snipped into long strips. I cut in varying widths to give a more textured feel to the final scarf. Once I’d finished cutting across the body of all 3 T shirts I was left with a bundle of jersey strips and a white sheet covered in black fluff (if you want to try this I REALLY recommend covering the floor) Et voila. Like this:

Miriam Schulman Watercolor Portraits and Fine Art Commissions Aaron Marks Special: So, You Want to Be a Sound Designer? : Designing Sound People often ask why I’m a sound designer and how I ended up with an active career creating sounds. It’s not something I specifically sought out but now that I’m a dozen years into doing it professionally, I’m really happy that I’m here. I actually started as a composer with the dream of scoring blockbuster Hollywood films but with the unpredictability of life, I ended up on the video game side of the industry instead and haven’t looked back. I was hired for my first game project in 1995 to create music but as the ‘guy with the microphone’ and the developers need to keep his audio team small, I was asked to create the sound effects as well. Every sound designer I’ve talked to over the years has their own story – most fell into it by accident, others followed a calculated path – but they all have the same things in common. What is a ‘sound designer’? ‘Sound Designer’ means something a little different depending on which industry you are working in. ‘Sound designer’ skills Finding the jobs

DIY Multi-Strand Scarf I am a huge fan on no-sew projects from recycled clothing. If you were a fan of my no-sew DIY Workout Shirt, you will enjoy this one as well. Plus they will look très chic when worn together! DIY Multi-Strand ScarfMakes one stylish scarf Ingredients: 1 old T-shirt (the bigger the better) 1 pair of scissors 1 ruler 10 minutes 1. 2. 3. 4. 5. 6. 7. Viola, a stylish scarf to wear to yoga!