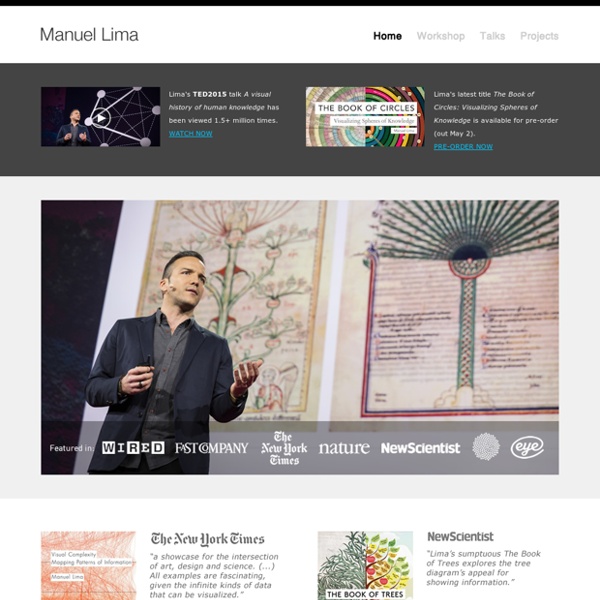 His first book Visual Complexity: Mapping patterns of information has been translated into French, Chinese, and Japanese. His latest The Book of Trees: Visualizing Branches of Knowledge, published in April 2014 by Princeton Architectural Press, covers over 800 years of human culture through the lens of the tree figure, from its entrenched roots in religious medieval exegesis to its contemporary, secular digital themes. With more than twelve years of experience designing digital products, Manuel has worked for Codecademy, Microsoft, Nokia, R/GA, and Kontrapunkt. He holds a BFA in Industrial Design and a MFA in Design & Technology from Parsons School of Design. During the course of his MFA program, Manuel worked for Siemens Corporate Research Center, the American Museum of Moving Image, and Parsons Institute for Information Mapping in research projects for the National Geospatial-Intelligence Agency.

Projects – jtnimoy A Lorem Ipsum generator stylized to sound like hipster slang (hipsum or hipster ipsum) has been passed my way a few times in the recent years. Last month for whatever reason, I was looking for a concise dictionary list of all the unique phrases used to randomly generate these strings of pure comedy. I did not find one, but thought it would be fun to try and "reverse-randomize" myself that concise list by analyzing 318 KB of generative gobbledegook.

artforum 2004 Techniques of Today - Bennett Simpson on Bernadette Corporation (Artforum, September 2004) It is the summer of 2001, and the New York--and Paris-based collective known as Bernadette Corporation has temporarily merged with Le Parti Imaginaire, a faction of post-Situationist militants and intellectuals with links to the burgeoning antiglobalization movement. The two groups have their own distinct practices and motivations, but, for the moment, they are united by the idea of making a film, which is to be set in the seaside Italian city of Genoa, amid the protests and stultifying inconclusiveness that will engulf the G8 Summit that July. The film resists knowing what it is or wants to be. And so its makers improvise, exploring what they call the "potential of community based on a radical refusal of political identity." What results is Get Rid of Yourself, an hourlong cine-tract-cum-documentary centering on the experiences and reflections of the so-called Black Bloc.

Manuel Lima Background[edit] Lima has a BFA degree in Industrial Design from the Faculty of Architecture at Technical University of Lisbon and a MFA in Design and Technology from Parsons School of Design.[7] During his MFA program Lima worked for Siemens Corporate Research Center, the American Museum of Moving Image and Parsons Institute for Information Mapping. Public speaking[edit] Recognition[edit] Lima was nominated by Creativity magazine as "one of the 50 most creative and influential minds of 2009"[2] and was elected Fellow of the Royal Society of Arts (FRSA) in 2010.[9] Motion Design, Art Direction Welcome to Johnlikens.com | Home | About | Work | Contact © John Likens 2013 loading

Amadeo de Souza Cardoso Amadeo de Souza-Cardoso (14 November 1887 – 25 October 1918) was a Portuguese artist. Life[edit] Amadeo was born in Mancelos, a parish of Amarante. At the age of 18, he entered the Superior School of Fine Arts of Lisbon and one year later (on his 19th birthday) he went to Paris, where he intended to continue his studies but soon quit the architecture course and started studying painting. By then, he was especially experienced in caricatures. In 1908, he lived in number fourteen of the Cité de Falguière. The Kingdom — Projects — Seb Janiak — artist&photographer Seb Janiak, The Kingdom series, 2009 – 2015 Tribute to Eun Jin Lee Drawing inspiration for his work from a variety of sources over the years such as traditional oriental texts or the history of Western art, Janiak created strikingly powerful ensembles in which human figures were replaced by nature and ideas. The Kingdom, which he began in 2008, constituted a key stage in this protracted process. These large photographs of turbulent skies, vehicles for the primal energy revealed by the transformation of clouds.

andrew wilson I recorded a song earlier. Overly sappy as usual. I compiled some random video to it. I started smoking cigarettes again it’s not because I’m addicted or because I saw it in that film PAUL THEK PROJECT During construction. Thek standing on the bridge that aims to the entrance of the pyramid. There are three other people in the image, two men climbing onto the bridge and a woman at the entrance of the pyramid.