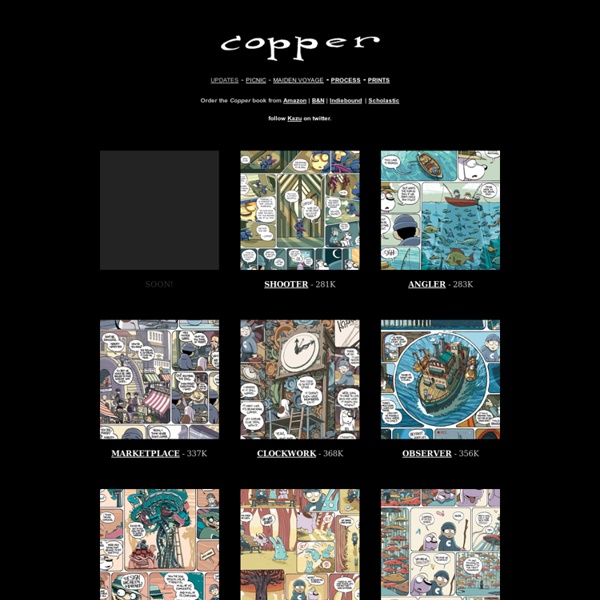 a softer world: 123 joey The We Are Become Pals book is here! You can buy it right now, for $16 in hardcover! It’s a hard book to describe, but this is the blurb we came up with: We are Become Pals is the story of Jane and Helen, and of their friendship. The hardcover has all the original chapters (which you can still read online for free right here), and all new material that follows their friendship further into their lives, as they get old and crotchety and awesome together. emily Joey and I started making news posts in early 2008, but we didn't have archives for them until now! Daisy Kutter Reprint Project by Kazu Kibuishi The final book: 6" x 9", 192 pages, softcover w/ matte finish, 4-color printing throughout (even though the story is in black and white), full color extra materials, including the full color short story "Phantoms" and the original mini-series covers. This will be the nicest version of Daisy Kutter on the shelf. Age Appropriate for Teen Readers. Daisy Kutter is a retired bank robber and legendary gunfighter who has decided to open a dry goods store in the small town of Middleton. When Daisy loses everything she owns in a high-stakes poker tournament, she is offered a job from the stranger who cleans her out at the table. Daisy Kutter: The Last Train was first published as a four-issue mini-series in 2004 and collected as a graphic novel in 2005. Sadly, there was very little interest. Publishers were mostly interested in what I was going to do next, with very small deals for Daisy Kutter 2 being offered. During this time, Daisy Kutter became a rare, out-of-print collectible.

Kiwi Blitz S*P and Other Comics Bolt City Productions | Bolt City Bulletin Yellow Peril, by Jamie Noguchi - An Office Romance Comic for Your Face! Updated M, W, F. SUBNORMALITY! All content copyright Winston Rowntree, 2015. Museum previously seen here and then here. steampunkholmes Cat toys these days To wet your appetite with the bonus story found in our new EC book, here's a sample page of the 8 page print-exclusive bonus story. We're pretty happy with the story, so we hope you'll like it! Also, the crossover between Magick Chicks and Eerie Cuties is in full swing. Annnnd, if you're an artist/creator who'd be interested in contributing a guest comic for either Eerie Cuties or Magick Chicks, we're looking for comics or illustrations that we could run during the Xmas & New Year holidays. Also, the book is at the printer and we should have it in hand at the end of the month and we'll start shipping as soon as we get it. Pre-orders will last till the end of October for the collector's edition, and we'll take it from there on if we'll continue to take orders for the collector's edition after that. Thanks again for all your support. EDIT: Found another link that previews some of our pages (along with some others.) NOVEMBER 18, 2010 We received the books last Friday (they look great!)