Bringing graphene speakers to the mobile market. Graphene has been hailed as a wonder material since it was first made more than a decade ago. 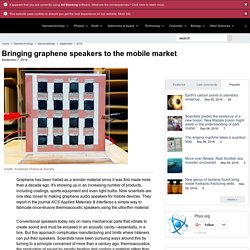 It's showing up in an increasing number of products, including coatings, sports equipment and even light bulbs. Now scientists are one step closer to making graphene audio speakers for mobile devices. They report in the journal ACS Applied Materials & Interfaces a simple way to fabricate once-elusive thermoacoustic speakers using the ultra-thin material. Scientists discover ground-breaking material: Graphane. (PhysOrg.com) -- Researchers at The University of Manchester have produced a ground-breaking new material, graphane, which has been derived from graphene. 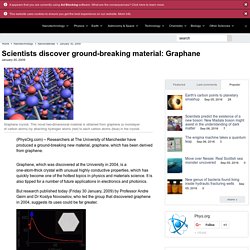 Graphene, which was discovered at the University in 2004, is a one-atom-thick crystal with unusual highly conductive properties, which has quickly become one of the hottest topics in physics and materials science. It is also tipped for a number of future applications in electronics and photonics. But research published today (Friday 30 January, 2009) by Professor Andre Geim and Dr Kostya Novoselov, who led the group that discovered graphene in 2004, suggests its uses could be far greater.

We can all live ‘forever’ - and we need to talk about it. GET Introduction. Aka Global Energy Transmission As of today, at least 40% of the world’s electric power still comes from coal, despite scientific and technical achievements that have been made so far. 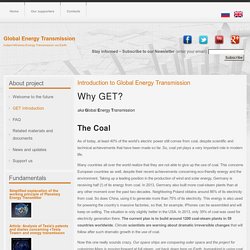 So, coal yet plays a very important role in modern life. Many countries all over the world realize that they are not able to give up the use of coal. This concerns European countries as well, despite their recent achievements concerning eco-friendly energy and the environment. Taking up a leading position in the production of wind and solar energy, Germany is receiving half (!) The Fourth Phase of Water has been Rediscovered. University of Washington Bioengineering Professor Gerald Pollack answers this question, and intrigues us to consider the implications of this finding. 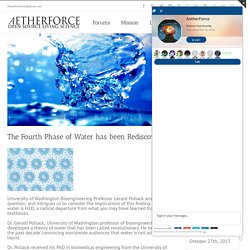 Not all water is H2O, a radical departure from what you may have learned from textbooks. Dr. Grow New Teeth, Only 20 Minutes a Day - HowStuffWorks. From lab-grown internal organs and stem cell research to test-tube babies and cloning, modern science is working overtime to create or recreate working, sustainable biological matter. 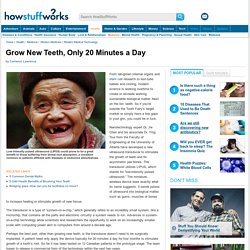 Next on the list: teeth. So if you’re outside the Tooth Fairy’s target market or simply have a few gaps in your grin, you could be in luck. Nanotechnology expert Dr. Jie Chen and his associate Dr. Chemists discover key reaction mechanism behind the highly touted sodium-oxygen battery. Chemists at the University of Waterloo have discovered the key reaction that takes place in sodium-air batteries that could pave the way for development of the so-called holy grail of electrochemical energy storage. 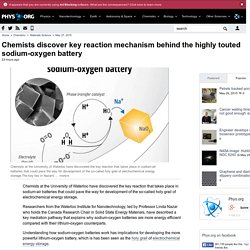 Researchers from the Waterloo Institute for Nanotechnology, led by Professor Linda Nazar who holds the Canada Research Chair in Solid State Energy Materials, have described a key mediation pathway that explains why sodium-oxygen batteries are more energy efficient compared with their lithium-oxygen counterparts. Understanding how sodium-oxygen batteries work has implications for developing the more powerful lithium-oxygen battery, which is has been seen as the holy grail of electrochemical energy storage. Their results appear in the journal Nature Chemistry. Erko Jun. Students are creating $350 bionic arms for children using 3D printing. A team of students at the University of Central Florida is using 3D printing to create bionic arms for children. 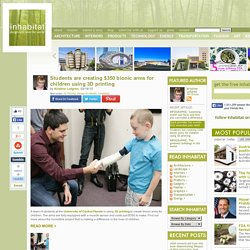 Scientists Develop Wonder Nanomaterial that Can Produce Energy, Clean Water and Hydrogen. Researchers in Singapore have developed a new nanomaterial that functions like the best Swiss army knife in the world. 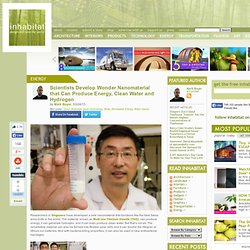 The material, known as Multi-use Titanium Dioxide (TiO2), can produce energy, it can generate hydrogen, and it can even produce clean water. But that’s not all: The remarkable material can also be formed into flexible solar cells and it can double the lifespan of lithium-ion batteries. Panasonic's new technology can purify water using sunlight. A new technology from Panasonic could produce clean drinking water with the purifying power of sunlight. 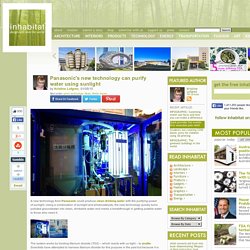 Using a combination of sunlight and photocatalysts, the new technology quickly turns polluted groundwater into clean, drinkable water and marks a breakthrough in getting potable water to those who need it. The system works by binding titanium dioxide (Ti02) – which reacts with uv-light – to zeolite. Scientists have attempted to harness titanium dioxide for this purpose in the past but because it is such a fine particle it disperses too quickly in water. The zeolite helps to solve that problem. Related: Scientists Develop Wonder Nanomaterial that Can Produce Energy, Clean Water and Hydrogen. CERN To Attempt ‘Big Bang’ In March, Stephen Hawking Issues Warning. First Bionic Eye Receives FDA Approval. The Second Sight ‘Argus II’ artificial retina, just receiving FDA approval to be legally transplanted in patients, allowing the blind to partially see again through bionic eyes. 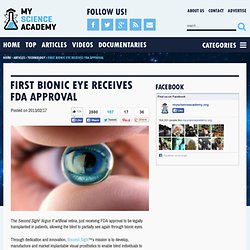 Through dedication and innovation, Second Sight™s mission is to develop, manufacture and market implantable visual prosthetics to enable blind individuals to achieve greater independence. Disclaimer: this animation is intended to demonstrate how the system operates, and may not reflect the specific visual performance of a given user of the system. Images © Second Sight source Second Sight via WordlessTech.

World War 3 is already over

Ancient UFO In Baltic Sea - New Discovery 2012. Baltic Sea UFO / Baltic Sea Anomaly - The Disbeliever. Baltic Anomaly Update: The Weird Just Got Much Weirder. June 28, 2012 - This is turning into one of the most amazing and perplexing discoveries in history. If you thought all of the questions surrounding the Baltic anomaly would be answered by the return trip, then you’d be wrong. The OceanX team have discovered right angles, walls with absolutely smooth surfaces and cavities-like corridors inside the object as well as something resembling a staircase – the weird just got weirder. The 3D Sonar in the picture above reveals perfectly straight lines and angles embedded into the round structure.

Top Free Energy Technologies for North Point. #1 Breakthrough: Solid State Generator. We have finally been given permission to discuss this technology that we consider to be at the very top of our list of emerging clean energy technologies. Solid state, low (for now) continuous power, commercial in maybe 24 months, cheap, high power density, no existing physics laws broken. by Sterling D. Allan Pure Energy Systems News. Water-Fueled Engine by a Friend of Kapanadze. From PESWiki Compiled by Sterling D. Allan Pure Energy Systems News February 18, 2012 Stefan Hartmann of Overunity.com has posted two videos of a Russian group (friends of Tariel Kapanadze) apparently powering a stand-alone engine on water. They drink from a bottle of water (of course, it could be Vodka), then pour the liquid into what appears to be a fuel tank.

Then they start up the engine. NI Corroborates Rossi Statements. Black Technology 10,000 years ahead of Public Sector Technology. Radical Technology Creates a "Hole in Time" to Mask Real Events. Cornell University scientists demonstrate how they have have created, a new invisibility technique that masks an entire event by briefly bending the speed of light around an event. Project Pegasus; TIME TRAVEL Video. 2011 - Andrea Rossi Explains His Energy Catalyzer.