iRobot’s RP-Vita Telepresence Robots Start Work At Seven Hospitals. [Source: UCLA] As smart as they are, doctors can’t compete with the volume of knowledge that a robot can retain.

In an effort to join the best of both worlds – human experience with robotic data – a number of companies are developing telemedicine robots that not only allow doctors to reach out to patients miles or continents away, but can offer immediate information and advice that draws from volumes of medical research and case studies. In January the FDA approved the telepresence platform RP-Vita, developed by iRobot and InTouch Health. Now seven hospitals across North America have enlisted the services of RP-Vita, bringing us one step closer to robotics-augmented healthcare. 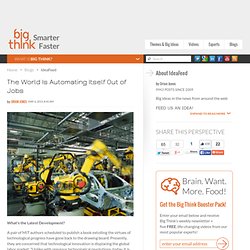 A pair of MIT authors scheduled to publish a book extolling the virtues of technological progress have gone back to the drawing board. Presently, they are concerned that technological innovation is displacing the global labor market. Hundreds of Morrisons jobs at risk as new technology introduced. 10 April 2013Last updated at 13:19 ET Morrisons said it was introducing cash-counting machines across its 490 stores Nearly 700 jobs could be cut at Morrisons as manual cash counting is replaced by machines in the supermarket's back offices. 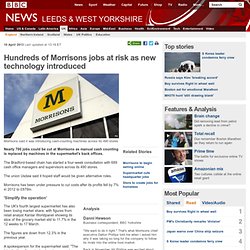 The Bradford-based chain has started a four-week consultation with 689 cash office managers and supervisors across its 490 stores. Technological Unemployment, Education and Economy ~ Nature Cure & Awareness. In the world that we are living, employment is the most important necessity of man. 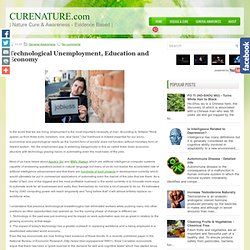 According to Voltaire "Work spares us from three evils: boredom, vice, and need. " Our livelihood is indeed essential for our socio-economical and psychological needs as the 'current form of society' does not function without monetary form of reward system. Yet, the employment gap is widening dangerously in this so called tickle down economic structure with technology playing havoc in automating even the most basic of the jobs. Andrew McAfee: Are droids taking our jobs? The Robot Reality: Service Jobs Are Next to Go. If you meet Baxter, the latest humanoid robot from Rethink Robotics – you should get comfortable with him, because you'll likely be seeing more of him soon. 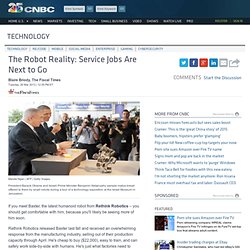 Rethink Robotics released Baxter last fall and received an overwhelming response from the manufacturing industry, selling out of their production capacity through April. The Myth of the Myth of Technological Unemployment. Over at Slate, Matt Yglesias has a post titled ‘The Myth of Technological Unemployment‘ accompanied by a graph showing that hours worked in the US have been rising and falling in lockstep with output. 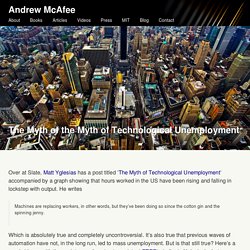 He writes Machines are replacing workers, in other words, but they’ve been doing so since the cotton gin and the spinning jenny. At the Restaurant of the Future, This Gadget Takes Your Order - Alexis C. Madrigal. A new tablet works well for customers and saves restaurants money, but could it mean the beginning of the end for the waitstaff? This story has been corrected and updated.

See note at the bottom of the story for details. PALO ALTO -- Walk through the doors of Palo Alto's Calafia, located in a shopping center across the street from Stanford, and you're retracing the footsteps of giants. 3D Printing: Make anything you want. Robot Replaces Student At Winchester Elementary School, Allows Devon Carrow To Attend Remotely (PHOTOS)

Researchers say AI prescribes better treatment than doctors. A pair of Indiana University researchers has found that a pair of predictive modeling techniques can make significantly better decisions about patients’ treatments than can doctors acting alone. 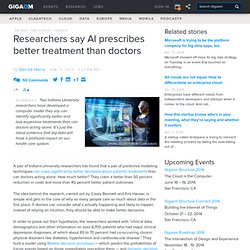 How much better? They claim a better than 50 percent reduction in costs and more than 40 percent better patient outcomes. Technological Unemployment. Robot Economy Could Cause Up To 75 Percent Unemployment. Google's self-guided car could drive the next wave of unemployment. Almost without noticing it, our world crossed a significant threshold last week. 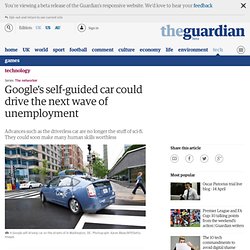 Jerry Brown, the governor of California, signed into law a bill that will allow driverless cars on to his state's roads from 2015. Insofar as most people noticed this event at all, they probably sniffed derisively. For some, it'll be seen as an example of techno-hubris – "flags on the moon stuff" – as one of my acquaintances put it. For others, it will be seen as yet another confirmation of the proposition that the continental United States slopes gently from east to west, with the result that everything with a screw loose rolls into California. 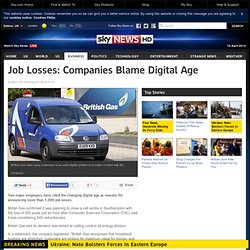 British Gas confirmed it was planning to close a call centre in Southampton with the loss of 550 posts just an hour after Computer Sciences Corporation (CSC) said it was considering 640 redundancies. British Gas said its decision was aimed at cutting costs in its energy division. Amazon Adds That Robotic Touch. Adept Quattro Reaches 300 Cycles Per Minut. Conntour Crafting builds house in 24 hours. Printer can create all fixtures and fittings as it creates house layer by layer Could be used to build a 2500 square foot house in a day Published: 11:07 GMT, 13 August 2012 | Updated: 19:15 GMT, 13 August 2012 Scaled up 3D printing technology could be used to build a house in under 24 hours, according to an engineer from the University of Southern California. 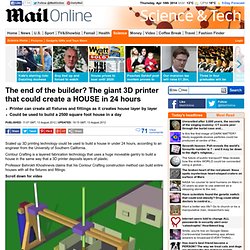 Contour Crafting is a layered fabrication technology that uses a huge moveable gantry to build a house in the same way that a 3D printer deposits layers of plastic. Professor Behrokh Khoshnevis claims that his Contour Crafting construction method can build entire houses with all the fixtures and fittings. The World’s First 3D-Printed Building Will Arrive In 2014 (And It Looks Awesome) Sure, 3D printing is fun and cute. And products like the Makerbot and Form 1 will most certainly disrupt manufacturing, even if it’s only on a small scale. But the possibilities of 3D printing stretch far beyond DIY at-home projects. In fact, it could entirely replace the construction industry. Technological Unemployment: Losing Jobs To Machines.

Technological unemployment results from technological change. This is a real concern for some who see a future where repetitive jobs will be performed primarily by robots. For those who have lost a factory job from being replaced by a machine, the future is already here. The replacement of workers by machines calls into question will people be replaced by robots.

The Age of Creation. “The future is about gigs and assets and art and an ever-shifting series of partnerships and projects.” – Seth Godin The world as we know it was created by the Industrial Age and it is now crumbling before our very eyes. We grew up in this world listening to common sense: learn well to get into fine universities, to land a well paid, SECURE job with pension, and to live comfortably until you die. This path might have worked up until a couple of decades ago, but then came the 21st century which erased any remains of job security and the promise of nurturing Companies or the State. The future of technology, science, art, business, politics and society. Two charts on technological unemployment. Source: Washington's Blog. What Is Technological Unemployment? Pizza Vending Machines Coming to the U.S.