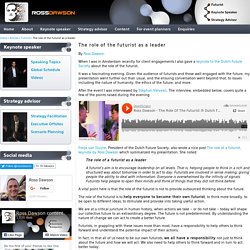 The Fourth Industrial Revolution: what it means and how to respond. We stand on the brink of a technological revolution that will fundamentally alter the way we live, work, and relate to one another. 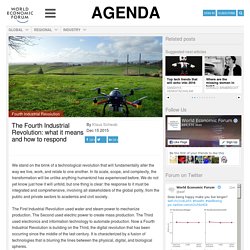 In its scale, scope, and complexity, the transformation will be unlike anything humankind has experienced before. We do not yet know just how it will unfold, but one thing is clear: the response to it must be integrated and comprehensive, involving all stakeholders of the global polity, from the public and private sectors to academia and civil society. The First Industrial Revolution used water and steam power to mechanize production. The Second used electric power to create mass production. The Third used electronics and information technology to automate production. The Self-Tuning Enterprise. As the companies pioneering self-tuning algorithms grow and mature, they increasingly face the challenge of running versus reinventing themselves—and not just in the marketing department. 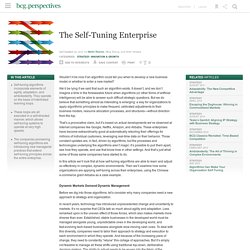 No surprise, then, that some are introducing new managerial practices that extend self-tuning principles across the entire enterprise. To understand how this works, think of the enterprise as a nested set of strategic processes. At the highest level, the vision articulates the direction and ambition of the firm as a whole. As a means to achieving the vision, a company deploys business models and strategies that bring together capabilities and assets to create advantageous positions. And it uses organizational structure, information systems, and culture to facilitate the effective operation of those business models and strategies. It's A Vuca World! A Framework for Understanding VUCA. What VUCA Really Means for You. Vuca-vortex_glf2014_ddi.pdf. Developing Leaders In a VUCA Environment. Leadership in a VUCA World. VUCA is an acronym used by the American Military to describe extreme conditions in Afghanistan and Iraq. 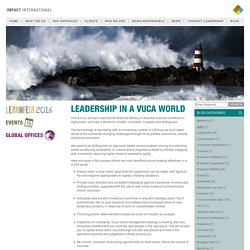 It stands for Volatile, Uncertain, Complex and Ambiguous. This terminology is resonating with an increasing number of CEOs as we try to make sense of the constantly changing challenges brought on by politics, economics, society and the environment. We seem to be shifting from an approach based around problem solving and planning aimed at reducing uncertainty, to a world where progress is made by actively engaging with uncertainty, requiring higher levels of leadership agility. Leading in a VUCA World_Terrell. Speed in a VUCA World - Interview with Bob Johansen.

VUCA Capability. Volatility, Uncertainty, Complexity and Ambiguity (VUCA) Paradigm for Leadership. Dealing with Complexity and Situations that Confuse and Muddle Decision Making The next aspect of uncertainty is closely tied with the points made in the previous paragraph. 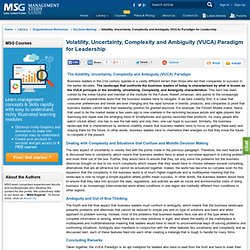 Therefore, the next feature that is discussed here is complexity, which means that business leaders have to adopt a non-linear approach to solving problems and must think out of the box. Further, they would have to ensure that they not only solve the problems but the business dilemmas brought on due to too much complexity which means that they would have to choose between several competing alternatives that are all attractive but cannot be actualized together. Understanding the VUCA World with Bob Johansen and David Small. A Framework for Understanding VUCA - Scott Berinato. Volatility, Uncertainty, Complexity and Ambiguity. In the era of healthcare reform when accountable care organizations, global payments, and partial capitation are the buzzwords filling Board rooms, healthcare executives are wondering what to do next. 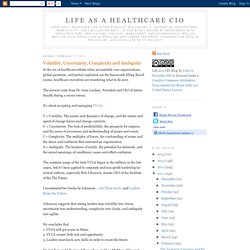 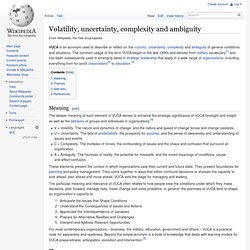 The common usage of the term VUCA began in the late 1990s and derives from military vocabulary[1] and has been subsequently used in emerging ideas in strategic leadership that apply in a wide range of organizations, including everything from for-profit corporations[2] to education.[3] Meaning[edit] Consumer Insights as the Answer to VUCA (Volatility, Uncertainty, Complexity, and Ambiguity) At the Marketing Research Association’s Insights & Strategy Conference last week in Chicago, Christie Hickman of the Outdoor Industry Association shared the need for researchers to take a flexible, iterative approach to understanding a disruptive business world. 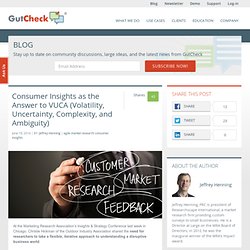 For many industries, today’s environment is what those in the military call. VUCA and SUPERVUCA Worlds. Winning in a SuperVUCA World. I come from the edge of the world, in biology where new stuff comes from. 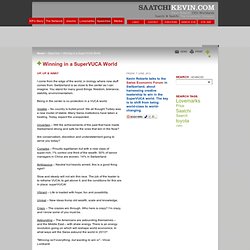 Switzerland is as close to the center as I can imagine. You stand for many good things: freedom, tolerance, stability, environmentalism. Being in the center is no protection in a VUCA world. Volatile – No country is bullet-proof. We all thought Turkey was a new model of stable. VUCA Lessons For Agile. Bob Johansen author of “Get There Early: Sensing the Future to Compete in the Present” outlines the challenges of VUCA projects. 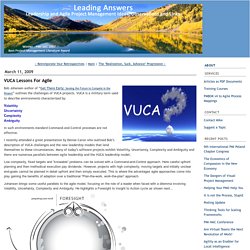 VUCA is a military term used to describe environments characterized by: VolatilityUncertaintyComplexityAmbiguity In such environments standard Command-and-Control processes are not effective. I recently attended a great presentation by Denise Caron who outlined Bob’s description of VUCA challenges and the new leadership models that lend themselves to these circumstances. Exponential Change - Technological Singularity. Accelerating Complexity Outrunning Leadership Competency. Leading From the Emerging Future. How a Volatile World Raises the Leadership Ante for Midsized Companies. Leadership Competencies for a VUCA World. Leadership Agility: A Business Imperative for a VUCA World.

VUCA: What Does This Mean for Future Leaders. Development Dimensions International (DDI), jointly with The Conference Board, conducted a survey of 13,124 leaders across many organizations, industries, and countries. An extensive study. The work was released as the Global Leadership Forecast 2014 | 2015. Leading In A VUCA World. Paula is a senior consultant with TTM associates and has managed many projects for the regional office in the Middle East including various VUCA workshops. What is VUCA? No Matter whether you live, work or manage business in America, Japan, Russia, The Middle East or Europe, there are lots of uncertainties involved and for various reasons they could be economic (financial crisis), natural disasters (like a tsunami or extreme weather conditions) or political turmoil… It is indeed a VUCA world!

Developing Leaders in a VUCA Environment. The Unique Challenges of Exponential Leadership. Salim Ismail The term “exponential” refers to a sequence or process by which desirable results are achieved. As Salim Ismail explains in his eponymous book, written with Michael S. Malone and Yuri van Geest, an exponential organization (ExO) “is one whose impact (or output) is disproportionately large — at least 10 times larger — than its peers because of the use of new organizational techniques that leverage accelerating technologies.” Such organizations pose unique challenges to those who aspire to lead them. In Chapter Eight, Ismail, “ExOs for Large Organizations,” he discusses six defining characteristics and I hasten to add that, with only slight modifications, they could also describe other leaders in small-to-midsize organizations. Here are the six characteristics of exponential leadership, accompanied by Ismail’s comments: 1.

The 2015 Exponential Leaders List. By Big Think Editors Disruptive innovation can be a polarizing force. Few companies can create it, but all companies feel its effect, some in ways that damage their business irreparably. Company leaders must understand how they can benefit from such change and need to see models of who has implemented it well. LEADING INTO THE UNKNOWN. 4 Steps To Becoming More Adaptable To Change. Transform. Perform. Grow. Critical thinkers will prevail in a VUCA world — People Matters. “Hey, it’s pretty crazy out there!”

Is something we most often hear as we scurry down office corridors, making it just in time for our next important meeting of the day. Delighting in the possible. It’s only natural to seek certainty, especially in the face of the unknown. Long ago, shamans performed intricate dances to summon rain. The Dilemmas of Leading in a VUCA World. Suppose you're a state legislator. You're about to vote on a bill that would impose significant regulations on hydraulic fracturing, the controversial process for extracting natural gas from shale rock whose use has skyrocketed in the past decade. Depending on your perspective, "fracking" is providing us with a clean, inexpensive energy source or it is a major health threat that poisons the air and water around drilling sites. Proponents point to lower energy costs and lower greenhouse-gas emissions. The 7 Transformational Concepts in The 21st Century Education.

Get There Early by Bob Johansen (BK Business Book) Leaders Make the Future. Assess Your Leadership Skills for the Future. Shifting to 21st Century Thinking » A Change Theory: Key Concepts for Understanding the Work of Robert Kegan. General Rationale and Approach In over our heads: Robert Kegan believes that the constantly changing demands of modern life may be developmentally inappropriate for many—perhaps even most—adults. We should no more blame or punish adults for their inability to meet the challenges of their lives than we would punish an infant for not being able to turn over, or a five-year-old who had not mastered abstract thinking.

Instead of blaming adults for simply being unable to meet these demands, Kegan asks that we learn how to support development—and have the patience to wait for it to come. He says, “The expectations upon us…demand something more than mere behaviour, the acquisition of specific skills, or the mastery of particular knowledge. Constructive-developmental: Kegan is a constructive-developmental psychologist. Information: In-form-ation is new knowledge that you add to the current form of your mind. Object: Object is the opposite of Subject. Kegan, R. (1982). 10 business tactics that will be dead in 5 years. Exploring the Future: What Leaders Need to Learn. Hay Group Leadership 2030 whitepaper. Leadership Competencies of the Future 2030. Leadership Thinking Ten Years Ahead. Our Greatest Deficit Future Oriented Leadership. NavigatingFuture. Leadership in the Era of the Human Singularity.

The Singularity's Impact on Business Leaders. What Leadership Will Look Like In 20 Years. Complexity — On The Rise ! Do You Have the Right Leaders? Complexity has emerged as a major topic and buzz word in organizations over the last 20 years. Yet it has only recently taken center stage in the consciousness of organizational leaders. In IBM’s 2010 & 2012 Global CEO Surveys, an ‘unprecedented level of interconnection and interdependency of trends was identified (interviews with over 1,700 CEOs from across the globe). They reported the rapid escalation of complexity is the biggest challenge confronting’ their organizations and it was ‘equally clear that their enterprises are not equipped to cope effectively with this complexity’. Even more challenging was the finding that 79% of the CEOs interviewed believed that there was even greater complexity ahead. Preparing for a cognitive complex, uncertain future.

How To Build Resilience. Learning Agility.