Ct2: Breakup of the USA 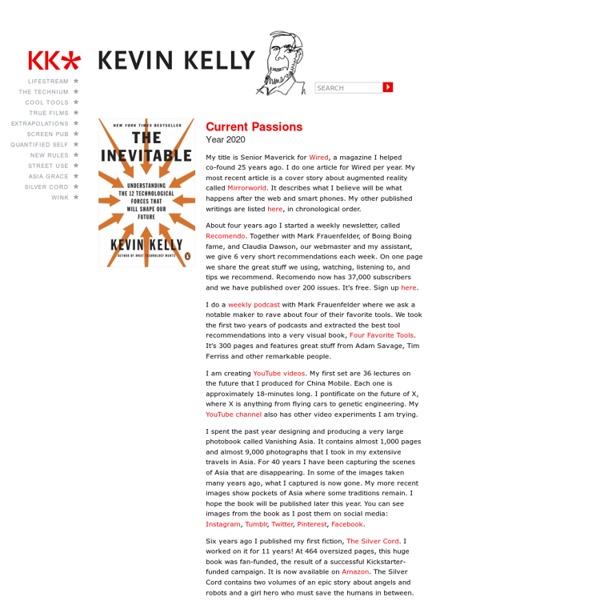 Year 2014 My self-published book, Cool Tools: A Catalog of Possibilities, became a best seller on Amazon last year (#15 of all books!). Crafted from the best of my blog Cool Tools, it recommends more than 1,000 of the best tools for individuals to use in making things and making things happen. The book is crammed with information, passion, and pointers. Producing the book with only 2 people was a gigantic undertaking, but the research still continues on the website. Mark Frauenfelder, founder of Boing Boing, has joined me in running the Cool Tools website.

Seven futures from New Scientist  I’ve got round to reading the New Scientist‘s 60th anniversary issue, published in November, which tries to look forward in the general direction of 2076. There are 14 short “What If…” essays, on everything from “What if we engineer new life forms?” (we’ll need a ‘kill’ switch) to “What if we found a theory of everything?” (it’s a very slow train coming) to “What if we discover room temperature super conductivity?” Make Money From Medical Tests All over the world drug companies, universities, hospitals and clinics are looking for both healthy people and those with specific health problems who are willing to participate in medical studies. There are short and long term opportunities available for those who are looking to get paid to take part in clinical and medical tests and drug trials. You can help to advance research and make some side cash at the same time. To find tests and trials near you try searching Craigslist, college bulletin boards and newsletters, the internet and newspaper ads. The following are a few resources to get you started. Just Another Lab Rat – This is a good site to start with to learn more about the clinical research process, including where the clinics are, what the qualifications are, what the various phases mean and what it's like to do a study.

Summer Camps in Canada Do you need ideas on where to send your children to summer camp in Canada? Here are some resources to help you find the right summer camp for your child, and how to find provincial associations and camping gear too. Summer Camp Search The "Find a Camp" map on the Canadian Camping Association site is a good place to start your search for summer camps in Canada. bloomberg Scientists say we’re now as close to self-destruction as during the height of the Cold War. A group of scientists warn that human civilization is nearer destruction than at any time since 1953. Amid nuclear proliferation, American leadership that dismisses climate change—and in a nod to the 2016 U.S. presidential election—the risk of fake news sparking a crisis, the end is apparently a lot closer than it used to be. The Doomsday Clock, set by the Bulletin of the Atomic Scientists, was reset Thursday to 2.5 minutes until midnight, a change from 3 minutes, where it was set for two years.

9 Ways To Discover Your Passion Spirituality and the workplace may seem like an oxymoron; after all it is difficult to 'be spiritual' in a crowded, competitive, materialistic and often frustrating environment. To find the Divine there may seem a little challenging, at first, because most traditional spiritual disciplines are not designed to help you do that. But irrespective of whether you are an executive, doctor, lawyer, architect or artist, you can weave your purpose into your work life with a few conscious measures. Interpretation Guidelines Manual, Employment Standards Branch, Ministry of Labour, Government of B.C. Policy Interpretation All the eligibility criteria in (a), (b), and (c) must be met before an employee can be defined as a “live-in camp leader”. ExampleMary is employed by a charity, at a summer camp, where she is responsible for the care of a group of twelve year olds and archery instruction for other campers.

Thesis, antithesis and synthesis: A constructive direction for politics and policy after Brexit and Trump In the heady days of 1989, with communism collapsing and the Cold War seemingly over, the political theorist Francis Fukuyama declared that we were witnessing the "end of history" which had culminated in the triumph of liberal democracy and the free market. Fukuyama was drawing on the ideas of German philosopher Georg Hegel, but of course, history didn’t come to an end, and, as recent events have shown, the Cold War was just sleeping, not dead. Now, following the political convulsions of 2016, we’re at a very different turning point, which many are trying to make sense of. I want to suggest that we can again usefully turn to Hegel, but this time to his idea that history evolves in dialectical ways, with successive phases of thesis, antithesis and synthesis. Hegel implied that we should see history, and progress, not as a straight line but rather as a zigzag, shaped by the ways in which people bump into barriers, or face disappointments, and then readjust their course Thesis

How to Actually Make Money Selling eBooks I get very frustrated whenever I’m looking for legitimate ways to generate additional streams of income, and I come across those horrid get-rich-quick sales pages. You know the ones – where the author can’t seem to decide on a single font size, and every other word is in bold. All you have to do is sign up for their amazing program, or buy their astonishing sales kit, and you too can be earning many thousands of dollars each month. In my quest to write, sell and make money selling eBooks, I’ve waded through mountains of these scams, and I’m here to tell you that it is possible to make money from selling eBooks, but that success does not come overnight and not without a lot of hard work.

Objectiveli app announces Facebook integration, sharing goals with friends San Francisco, CA (PRWEB) October 29, 2012 Objectiveli manages goals and objectives, is the first app of its kind to integrate with Facebook, giving members the opportunity to use the world’s largest social network to connect with friends and use them as cheerleaders in their roads to fulfilling goals and objectives. Facebook announced a milestone at the beginning of the month: 1 billion users and counting. According to ZDNet, Facebook users spend more than 10.5 billion minutes daily on the social platform, adding photos, connecting with friends, sharing news--and now, reaching their goals. Objectiveli, the goal setting platform which allows users to set goals and objectives in order to achieve success now completely integrates with Facebook.

It's the year 2020...how's your cybersecurity? What if, in 2020, wearable devices did not care about how many steps you took, and instead were concerned with your real-time emotional state? With networked devices tracking hormone levels, heart rates, facial expressions, voice tone and more, the Internet could become a vast system of “emotion readers,” touching the most intimate aspects of human psychology. What if these technologies allowed people’s underlying mental, emotional and physical states to be tracked – and manipulated?

Putting the 'Prod' in Productivity New Write or Die iOS App! Now you can Write or Die wherever you are! Works for both iPad and iPhone. Android version coming soon. How to think about 2076 Vincent Fournier/Gallerystock By Sumit Paul-Choudhury JOURNALISM has famously been described as “the first rough draft of history.” New Scientist‘s own brand of journalism – which is 60 years old this week – is a bit different. We aim to provide a first rough draft of the future. Over the past 60 years we have not just reported new discoveries and inventions in science and technology. Wasp WPL305 Desktop Barcode Printer WPL305 Desktop Barcode Printer The Wasp WPL305 is a compact, powerful desktop barcode printer designed to meet your light- to medium-duty barcode printing requirements. Its durable construction, speed, and dual printing technologies make the WPL305 a leader in its class and one of the most popular printers in the Wasp line. The WPL305 offers both direct thermal and thermal transfer printing in one printer, reducing the need for additional printers for different printing processes. With print speeds up to 5” inches per second at 203 dpi resolution, the WPL305 is a cost effective way to print labels of all types, including shipping labels, stock labels, asset tags, medical labels, and location labels. Print speed is supported by 8 MB of SDRAM, 4 MB of FLASH memory and multiple connectivity options including parallel, USB, and RS232.

The Plutocratic Exit & their False Flag Alien Invasion Getaway [UFO/PES Part 1] Originally published in New Dawn Magazine Special Issue Vol. 10 No.1 Why are the super rich suddenly sponsoring SETI and getting all worried about asteroids (and AI)? what use might they have in not just learning about possible extraterrestrials, but learning how WE react to them too?