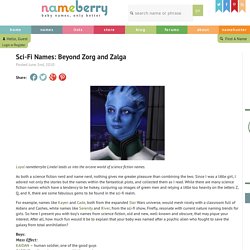 As both a science fiction nerd and name nerd, nothing gives me greater pleasure than combining the two. Since I was a little girl, I adored not only the stories but the names within the fantastical plots, and collected them as I read. While there are many science fiction names which have a tendency to be hokey, conjuring up images of green men and relying a little too heavily on the letters Z, Q, and X, there are some fabulous gems to be found in the sci-fi realm. Sci-Fi Names.

What shall you name your baby nerd? 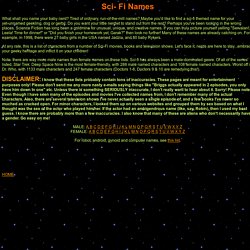 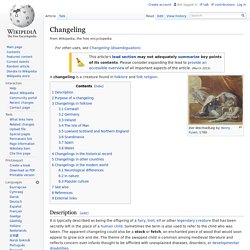 Description[edit] It is typically described as being the offspring of a fairy, troll, elf or other legendary creature that has been secretly left in the place of a human child. Sometimes the term is also used to refer to the child who was taken. The apparent changeling could also be a stock or fetch, an enchanted piece of wood that would soon appear to grow sick and die. The theme of the swapped child is common among medieval literature and reflects concern over infants thought to be afflicted with unexplained diseases, disorders, or developmental disabilities. Faeries - Encyclopedia Mythallica. Customarily brownies are said to inhabit houses and aid in tasks around the house. 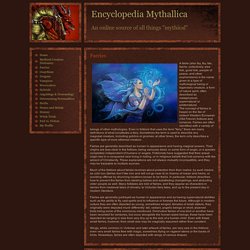 However, they do not like to be seen and will only work at night, traditionally in exchange for small gifts or food. The Trolliest Critic. Stereotypes Of Witches. 1. 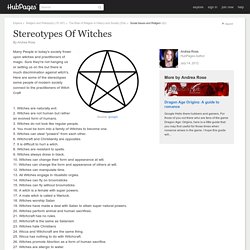 Witches are naturally evil. This is pure nonsense.Simple as that. A large portion of the witch craft religion is in fact doing good for others and for nature. They plant gardens, go out in nature, Help those in needs, and many other things that other religions also consider good. Elder's in witch craft are highly regarded, serving as a high priestess or priest. List of Mythical Creatures. Category:Creatures & Spirits. Creatures of Supernatural list. List of Mythical Creatures. Event Review: World Building: Author Tips for Creating a New SciFi/Fantasy Culture. By Dakota Lenz This year’s ConDor, San Diego’s longest running Science Fiction and Fantasy convention, included a three part, author paneled workshop on how to create authentic and complex Science Fiction and Fantasy worlds. 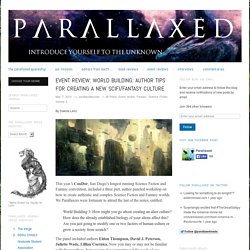 We Parallaxers were fortunate to attend the last of the series, entitled: World Building 3: How might you go about creating an alien culture? How does the already established biology of your aliens affect this? Are you just going to modify one or two factors of human culture or grow a society from scratch? The panel included authors Eldon Thompson, David J. “David J. PSYC339 - The Mermaid Myth - Culture and Folklore. Antipholus of Syracruse: O, train me not, sweet mermaid, with thy note, To drown me in thy sister's flood of tears. 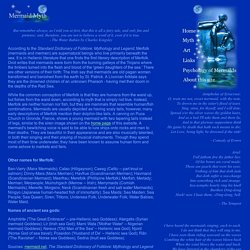 Sing, siren, for thyself, and I will dote; Spread o'er the silver waves thy golden hairs, And as a bed I'll take them and there lie, And in that glorious supposition think He gains by death that hath such means to die; Let Love, being light, be drowned if she sink! Ariel: Full fathom five thy father lies; Of his bones are coral made; Those are pearls that were his eyes: Nothing of him that doth fade But doth suffer a sea-change Into something rich and strange. 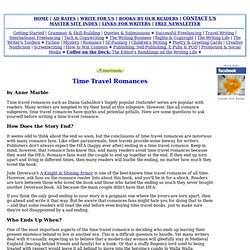 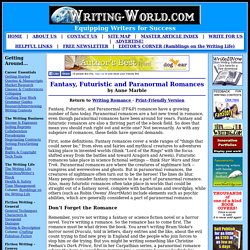 Paranormal romances are a hot new trend in romance, even though paranormal romances have been around for years. Writing Questions Answered. The Writing Café, Character Development: The Cyborg. Essays on how to write: Limyaael's Fantasy Rants. The only complete and up-to-date collection of limyaael's fantasy rants. 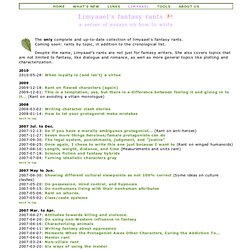 Coming soon: rants by topic, in addition to the cronological list. Despite the name, Limyaael’s rants are not just for fantasy writers. She also covers topics that are not limited to fantasy, like dialogue and romance, as well as more general topics like plotting and characterization. 2003 Jul. to Nov.2003-11-19: Ten Unpopular Fandom Opinions (gacked from vulgarweed)2003-11-13: Felt like being declamatory again (Ten pieces of writing advice)2003-10-03: List of do's and dont's for original characters in fanfic.2003-08-08: The three little letters that cause so much pain...

Fantasy Name Generator. By Samuel Stoddard - Version 1.5 One of the perks of creating fantasy stories -- whether by writing a story or game or by role-playing -- is you get to make up the names. Some people relish the task while others are frustrated by it. Some like it but can't seem to create names that are diverse enough. Building the Perfect Beast. Sarah Jane Elliott ©2001, Sarah Jane Elliott When you immerse yourself in a fantasy world, chances are you’re going to come across a talking animal sooner or later. Contemporary Fantasy. By Paula Fleming An inherent advantage of the fantasy genre is that it offers a dazzling diversity of settings. Some fantasy is set in alternate versions of the historical past, in which the magic of folklore is real. For example, Orson Scott Card's Alvin Maker series, beginning with Seventh Son, is set on an American frontier where a baby's caul has protective power. Other stories take place in imaginary worlds populated by folkloric characters.

The map in the front of The Ill-Made Mute by Cecilia Dart-Thornton bears no clear relationship to any place on Earth, and ships and horses fly across the sky, but its wights, both seelie and unseelie, were meticulously researched from the folklore of the British Isles. Such fantasy settings free the author from the constraints of the "real world. " Defining the Sources, Effects and Costs of Magic. By Lital Talmor So we have a hero: tall and handsome, with a mysterious past, a claim for the throne and an arch-enemy. Oh, yes, and he can do magic. Poof! With a flick of his fingers the nemesis turns into a lizard, an army of genies wins the crown for him, and the ghost of the late king appears and proclaims him the rightful heir.

The End. Thoughts on Creating Magic Systems at SF Novelists. David B. Coe July 21st 2011 I’ve written before, on other blogs (including a site I maintain with several other fantasy authors) about creating magic systems and what I feel such a system needs to read as “real.” In recent months, though, I’ve been thinking about magic a bit differently, in part because I’m now writing historical fantasy and contemporary urban fantasy rather than the alternate-world epic fantasy I’ve published throughout my career.

Things in Speculative Fiction That Would Be Unforgiveably Offensive If Only Everyone Was Human. Treating the Character as Subservient Just Because They're Not Human The film version of Eragon contains a scene where Eragon declares, "I'm the rider! I say where we go! " to Saphira, after the latter voices her differing opinions. Spaceship Generator. How to write a great fantasy combat scene. Fantasy Clichés to Avoid - What Beginners Do in Fantasy Fiction. Fantasy Fiction Clichés to Avoid - What Beginners Do in Fantasy Fiction [First, my profound apologies to the vast majority of readers who don't steal content, but I have to state the following.

This article and all content on this website belongs to Val Kovalin, copyright © Obsidianbookshelf.com, except where noted. Unauthorized use and/or duplication of this material without written permission from Val Kovalin is strictly prohibited. Fantasy writing tips, how to write a fantasy novel, creative wri. Sign up to my mailing list, and choose a FREE EBOOK as a gift. 10 Writing "Rules" We Wish More Science Fiction and Fantasy Authors Would Break.

So You Want To Have A Powerful Or Talented Character Who Probably Won't Be Perceived As A Mary Sue? Keeping Shapeshifters From Getting Overpowered. Tips & Ideas To Make Better & More Interesting Powers. Names of THE FUTURE!!! Tips and Tricks For Creating Fantasy, Sci-Fi, and Other SF Names. Tips For Writing Better Human/Humanlike Characters Who Are Really 700 Years Old (Give Or Take A Few Centuries)